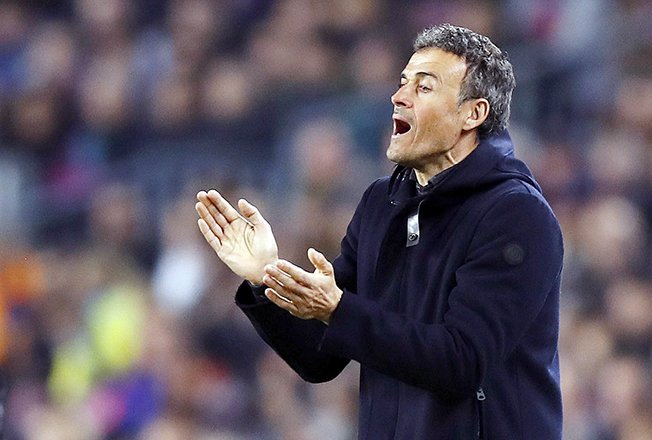 Luis Enrique has announced he will not be Barcelona's head coach next season, saying he 'needs a rest'

Luis Enrique’s announcement that he will quit Barcelona at the end of the season was expected, but the timing – at the end of a news conference after his side thrashed Sporting Gijon 6-1 – came as a surprise.

In fact, he had first considered not renewing his contract beyond next summer during pre-season, he said, after a dramatic slide at the end of the second campaign. Barca had exited the Champions League and could only claim a league title that had looked to be sewn up on the final day of the season.

That dip in form, which saw Barca lose three consecutive league games for the first time in 13 years, was the first sign that the wheels were starting to come off a spectacular machine that had rolled to the treble in his first season.

Concern grew when Barca slumped to a 2-1 defeat at home against newly promoted Alaves after the coach made a string of changes. His much criticised squad rotation came back to haunt him in a 4-3 defeat at Celta Vigo.

Barca remained in the fight for the league title and on Wednesday overtook Real Madrid at the top of La Liga, but they have also failed to convince against the top sides. Their decline culminated in a 4-0 thrashing at Paris St Germain that left them on the brink of an early exit in the Champions League.

There was more than a hint of rumbling discontent in the dressing room. Heavyweights Sergio Busquets and Andres Iniesta publicly criticised the coach’s tactics in Paris, although the coach found an ally in Gerard Pique.

The coach also looked rattled after the game in a tense exchange with a Catalan television reporter, who he harangued for not giving him credit for the team’s successes.

While Enrique has long had a prickly relationship with the media, it was becoming clearer that the stress of a role which had worn out predecessor Pep Guardiola was finally getting to him.

Barca failed to give a fitting response in their next game against struggling Leganes, rescuing a 2-1 win with a late penalty converted by Lionel Messi, which the Argentine chose not to celebrate.

Enrique’s uneasy relationship with Messi nearly cost him his job in January 2015 after the Argentine reacted badly to being left out against Real Sociedad. In general, he appeared to have little personal connection with his squad.

These underlying tensions mean Enrique will not be remembered with the same reverence as Guardiola, even though he has delivered a similar trophy haul as his old team-mate, who was seen as the spiritual heir to Johan Cruyff, the godfather of the modern Barcelona.

President Josep Maria Bartomeu, however, lauded Enrique: “We’ve had a super coach in the last three years,” he declared. “No one can doubt he’s one of the best coaches Barcelona have had and who has fit with our ideas.”

Sevilla’s Jorge Sampaoli and Athletic Bilbao’s Ernesto Valverde are the two main candidates to succeed Enrique, although the outgoing coach is believed to want his assistant Juan Carlos Unzue to take over.

Argentine Sampaoli has transformed Sevilla into one of the most exciting teams to watch in Europe with a dynamic, possession-based style of play reminiscent of the enthralling football Guardiola served up. He is seen as the fans’ choice, while former Barca player Valverde is reported to be favoured by the board.

Messi’s bond with compatriot Sampaoli could be a deciding factor, however. Whoever Barca do appoint will have his work cut out in repeating Luis Enrique’s achievements, even though the coach never managed to satisfy everyone at the club.

Unemployment rate seen at 14.1 per cent in January, Eurostat says