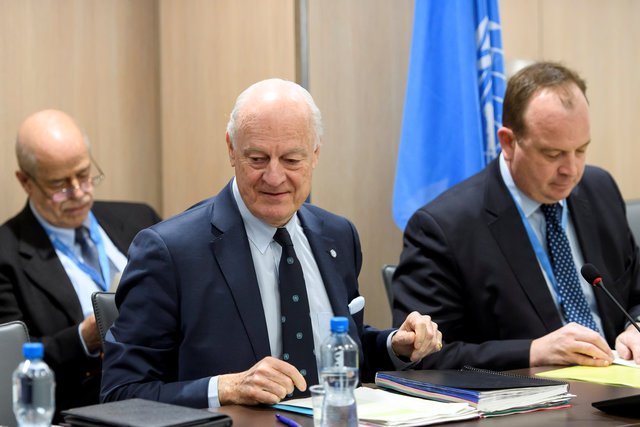 Russia accused the main Syrian opposition group at peace talks in Geneva of sabotaging the process on Thursday, a day after Moscow foreign ministry officials met the rebels for rare talks on how to narrow their differences.

Backed by Western and Arab states and Turkey, the High Negotiations Committee (HNC) met with Russian Deputy Foreign Minister Gennady Gatilov on Wednesday to discuss what it says are Moscow’s broken ceasefire promises and put pressure on the Syrian government delegation.

Moscow has sought to revive diplomacy since its air force helped the Syrian army and allied militias defeat rebels in Aleppo in December, President Bashar al-Assad’s biggest victory in six years of war.

“Unfortunately, we note that based on the results of the first few days the talks are once again raising questions about the ability of representatives of the Syrian opposition to do a deal,” Foreign Ministry spokeswoman Maria Zakharova told a news briefing in Moscow.

“The so-called High Negotiations Committee is refusing to cooperate equally with the Moscow and Cairo platforms and is in fact sabotaging fully-fledged dialogue,” she said, referring to two smaller opposition groups that curry favour in Moscow.

Despite a ceasefire nominally in force since late December – sponsored by Russia, Turkey and Iran – violence has escalated since the onset of the talks a week ago and the warring sides appear no closer to actual negotiations.

The opposition’s lead negotiator Nasr al-Hariri told reporters on Wednesday that the meeting with Gatilov had been positive with a frank exchange on issues ranging from the ceasefire to political transition and fighting terrorism.

The opposition considers “political transition” as meaning Assad must hand over power. On Wednesday, they said that after hearing from UN envoy Staffan de Mistura, they believed that Russia had persuaded Syria‘s government negotiators that a transition should be on the agenda of the talks.

Assad’s chief negotiator Bashar al-Ja’afari has never accepted discussion of the subject before.

The talks are governed by UN Security Council resolution 2254, which sets out a political transition process including plans for a new constitution, UN-supervised elections and transparent and accountable governance.

De Mistura wants to put those subjects into three “baskets”. Diplomats and a source close to the government said Damascus had agreed to study the baskets, but had demanded a fourth basket on “terrorism” be included.

The opposition is reluctant to accept, worrying that the government would use it to gain time and block negotiations.

“Some within the opposition said they were extremely disappointed with their meeting with the Russians, who continued to push back and stick to their stance that the opposition was not united,” said one senior Western diplomat.

“The Russians may be disappointed that after leaning on the Syrians, they are not getting much in return for their investment from the rebels,” he said.

Visegrad leaders call for bigger role for nations in EU

‘No confidence’ and early election motions filed in the north