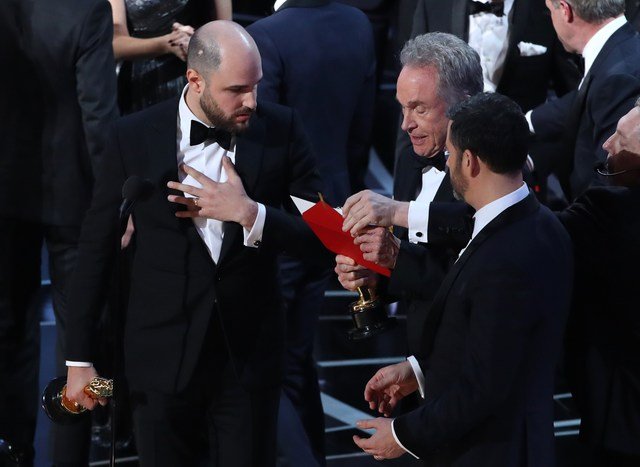 Security has been stepped up for the two accountants responsible for botching the Oscar best picture announcement, their company said on Thursday, as the ceremony’s stage manager said the pair had to be pushed onstage to set things right after the gaffe.

Accountancy firm PricewaterhouseCoopers (PwC) said security was provided at the homes of Brian Cullinan and Martha Ruiz following Sunday’s blunder, in which an envelope mix-up led to the announcement of the wrong film as best picture winner during the live TV broadcast.

PwC gave no details but celebrity website TMZ.com said the pair had received death threats on social media and that photos of their homes had been posted online.

Cullinan, who posted a now-deleted backstage photo of Emma Stone on Twitter just before the gaffe, and Ruiz were barred on Wednesday by the Academy of Motion Picture Arts and Sciences from taking part in the Oscars ceremony or ballot counting ever again.

Natoli said he was standing near Ruiz when actors Warren Beatty and Faye Dunaway incorrectly announced on stage that musical “La La Land” had won the top award for best picture.

The winner of best picture was African-American independent film, “Moonlight.”

“We watched for about 10 more seconds, and during that entire time, Martha was no more than five feet away from us. When ‘La La Land’ was announced, she did not try to get my attention, she did not say anything. And she’s supposed to have memorised the winners,” Natoli told TheWrap.

More than a minute passed before Cullinan said backstage that something was wrong.

Backstage crew were “trying to get Brian to go on stage, and he wouldn’t go,” Natoli said. “And Martha wouldn’t go. We had to push them on stage, which was just shocking to me.”

“We know that Brian was taking pictures backstage when he should not have been, and not paying attention… And there was the new design of the envelope, which we had complained about to the Academy,” Natoli said.

PwC, which has overseen Oscar balloting for 83 years, said on Thursday the two accountants were still employed by the company.

More cracks emerge in Fillon campaign as rivals push ahead

‘When All About That Bass came out, I was a child – I was terrified’