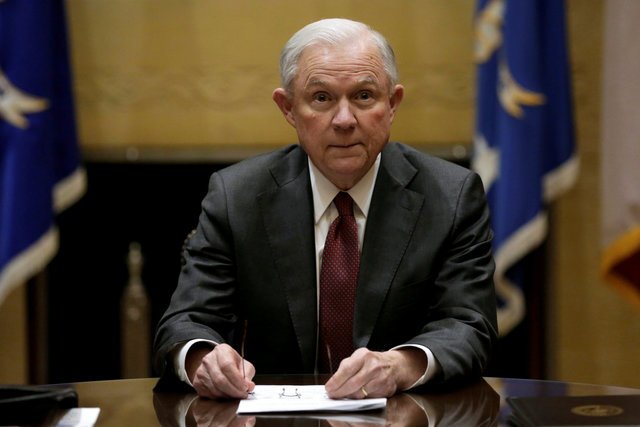 US President Donald Trump stood by his attorney general on Thursday as a political storm erupted after it emerged that Jeff Sessions met last year with Russia’s ambassador but did not disclose the contacts in Senate testimony.

Sessions is the country’s top law enforcement official and several of his fellow Republicans in Congress called for him to recuse himself from investigations into alleged Russian meddling in the 2016 US presidential election.

Democrats went further and urged Sessions’ resignation and the appointment of a special prosecutor, in a flare-up of a controversy over ties between Trump associates and Russia that has dogged the early days of his presidency.

Trump said he had “total” confidence in Sessions. “I don’t think so,” he told reporters during a visit to Newport News, Virginia, when asked whether Sessions should step aside from the investigations.

Answering questions from reporters, Trump said he “wasn’t aware at all” that Sessions had spoken with the Russian ambassador. Asked whether Sessions testified truthfully to the Senate, Trump said, “I think he probably did.”

The pressure on Sessions comes at a time when Trump and Republicans who control Congress are trying to move past early administration missteps and focus on issues important to them including immigration, tax cuts and repealing the Obamacare healthcare law.

Sessions, a former US senator who was a senior campaign aide of Trump’s, received Russian Ambassador Sergei Kislyak in his office in September, the Washington Post reported. The other encounter was in July at a Heritage Foundation event that was attended by about 50 ambassadors, during the Republican National Convention, the Post said.

The Justice Department confirmed the two meetings, saying they were in Sessions’ capacity as a member of the Senate Armed Services Committee and there was nothing untoward about them. Sessions also denied any wrongdoing.

During his confirmation hearing in January, Sessions responded to a question from Democratic Senator Al Franken that he did not “have communications with the Russians” during the course of the presidential campaign.

Several Republican lawmakers called on Thursday for Sessions to recuse himself from the Russia investigation, while others, including House Speaker Paul Ryan, did not.

Among the Republicans calling for Sessions to recuse himself were: Jason Chaffetz, chairman of the House of Representatives Oversight Committee; Senators Rob Portman, Susan Collins and Lindsey Graham; and Representative Darrell Issa.

Ryan told reporters he saw no purpose in Sessions recusing himself unless the attorney general himself was the subject of an investigation.

Senator Richard Burr, chairman of a committee responsible for investigating the allegations of Russian election meddling, said he trusted Sessions to decide if he should be involved in the probe.

US intelligence agencies concluded last year that Russia hacked and leaked Democratic emails during the election campaign as part of an effort to tilt the vote in Trump’s favour. The Kremlin has denied the allegations.

Sessions is one of many “subjects” of a wide-ranging government investigation of any contacts between the Trump’s campaign and associates and Russia’s government and individuals associated with it, said two US officials familiar with the investigation.

The officials, speaking on condition of anonymity, said Sessions was not now a “target” of the probe, which they said is being conducted by the FBI, the Treasury Department, the CIA and the National Security Agency, assisted by some allied intelligence services.

The investigation, one of the officials said, has a number of subjects because there have been numerous contacts between associates of Trump, including ousted national security advisor Michael Flynn, and the Russian embassy in Washington and, particularly, Russian and some Ukrainian businessmen and companies.

The fact that Sessions is a subject of the probe is not necessarily suggestive of any wrongdoing, the officials said.

House Democratic leader Nancy Pelosi accused Sessions of breaking the law by lying under oath during his Senate confirmation hearing.

Senate Democratic leader Chuck Schumer said Sessions had misled Congress over his contacts with the ambassador and should resign for the good of the country, adding it would be like “Alice in Wonderland” if the administration were to approve Sessions’ investigating himself.

Democrats on the House Judiciary Committee asked the FBI to launch a criminal investigation into Sessions’ statements to Congress about his communication with Russian officials.

Trump has accused officials in former Democratic President Barack Obama’s administration of trying to discredit him with questions about Russia contacts. The White House dismissed the revelation of the Sessions meetings as a partisan attack, saying on Thursday that Sessions’ contacts with the ambassador had been as a member of the Armed Services Committee.

Trump fired Flynn last month after it emerged that the retired lieutenant general had discussed US sanctions on Russia with Kislyak before Trump’s swearing-in on Jan 20, and then misled Vice President Mike Pence about the conversations.

Trump called frequently during his campaign for improved relations with Russia, drawing criticism from Democrats and some Republicans given that ties have been deeply strained in recent years over Moscow’s military interference in Ukraine, military support for President Bashar al-Assad in Syria and President Vladimir Putin’s intolerance of political dissent.

In a statement late on Wednesday, Sessions said he had never discussed campaign details with any Russian officials. “I have no idea what this allegation is about. It is false,” he said.

“There was absolutely nothing misleading about his answer,” she said in a statement. “He was asked during the hearing about communications between Russia and the Trump campaign – not about meetings he took as a senator and a member of the Armed Services Committee.”

Sessions has resisted calls to recuse himself from the investigations. He told NBC News on Thursday morning, “Whenever it’s appropriate I will recuse myself, there’s no doubt about that.”

“I have not met with any Russians at any time to discuss any political campaign,” he added.

During Sessions’ confirmation hearing, Franken asked him what he would do if he learned of any evidence that anyone affiliated with the Trump campaign communicated with the Russian government in the course of the campaign.

Sessions said he was not aware of any such activities, adding, “I have been called a surrogate at a time or two in that campaign and I did not have communications with the Russians.”

Asked by Democrat Patrick Leahy in a confirmation questionnaire whether he had been in contact with “anyone connected to any part of the Russian government about the 2016 election, either before or after Election Day,” Sessions responded, “No.”

The Russian Embassy to the United States, shrugging off the uproar, said on Thursday it was in regular contact with “US partners.”

More cracks emerge in Fillon campaign as rivals push ahead