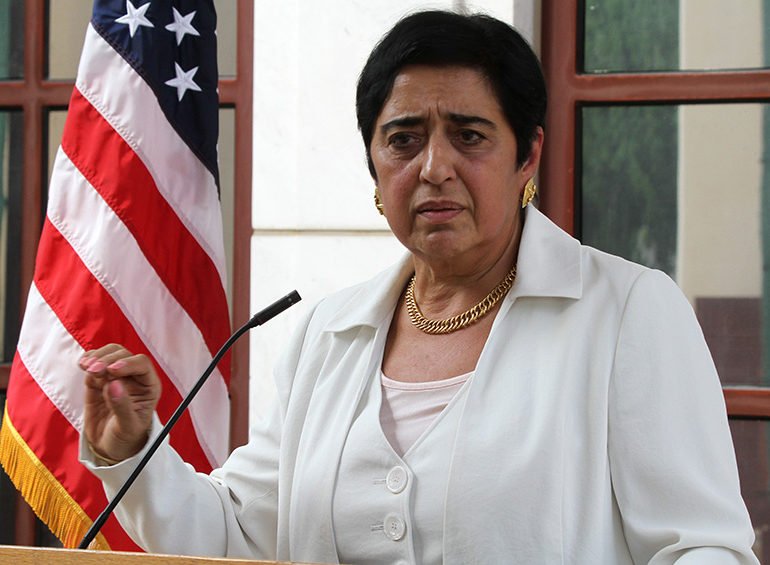 FORMER foreign minister Erato Kozakou Markoullis on Friday described as a ‘mini coup’, the parliamentary decision to commemorate the 1950 Enosis referendum in public schools, annoying hardline parties, whose MPs had passed it three weeks ago.

Markoullis who has been targeted before for speaking against the decision, which has caused the interruption of reunification talks, suggested that the aim was to disrupt the negotiations.

“I characterise it as a mini coup against the negotiations,” she said during a morning news show on state television. “And it turns out at the end of the day that the people who orchestrated this have achieved their goal, so far at least.”

Markoullis agreed that the Turkish Cypriot reaction was excessive, but “not in the first days.”

The amendment, submitted by far-right party Elam, had been supported by Diko, Edek, the Citizens Alliance, the Solidarity Movement, and the Green party. Akel voted against, while ruling Disy sat on the fence, a move that was fiercely criticised.

The former foreign minister said the decision came at a critical juncture in the talks and unfortunately gifted the Turkish side a pretext.

“Don’t forget that when pretexts were given in other cases, the consequences were tragic,” she said.

Diko, which has been accused of going to bed with Elam because its chairman had presidential aspirations, reacted to the comment, calling on President Nicos Anastasiades to take a stance “towards the unacceptable and disrespectful statement … of his adviser.”

“If the president endorses this position he should say so, so that the people know,” Diko said.

Edek more or less echoed Diko, accusing Markoullis of reinforcing the excuses posed by the Turkish side to slow down the talks and avoid tabling proposals on the substantive issues.

“Through her statements, (Markoullis) for her own reasons, appears to have lost touch with reality,” Edek said. “If Mrs. Markoullis’ approach on these issues is so frivolous, what can we expect on the serious matters she handles in the negotiations.”

In response to the criticism, Markoullis posted a comment on her Facebook page, saying that her reference on the mini-coup concerned “the actions of the far-right and neo-nazi party Elam which, by submitting the amendment on the Enosis referendum, it dragged with it, unfortunately, parties with a democratic and anti-fascist past”.

Elam, she said, is not participating in the National Council by choice because they are against a solution. “Elam’s provocative action aimed at derailing the negotiations, because it was quite obvious that the Turkish Cypriot side and Turkey would react strongly and decisively,” she said.

Markoullis said that it was surprising that instead of her comment stirring reactions from Elam, it stirred the reactions of parties of the centre spectrum “feeling that my reference was aimed at them”. She added that those parties that supported Elam’s amendment, bear “tremendous responsibilities”.

MP calls for ‘costly’ SGO welfare funds to be abolished