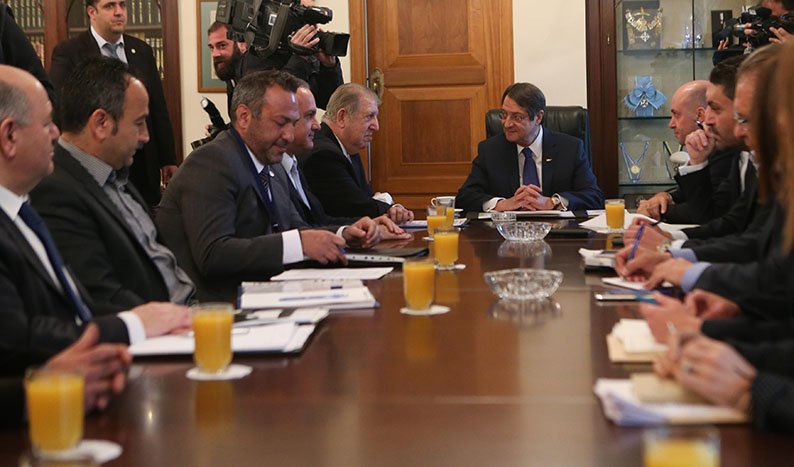 President Anastasiades meetings with a delegation of the state sector nurses

The agreement was achieved during a meeting hosted by President Nicos Anastasiades, where he discussed with delegations of the nurses’ union Pasyno and the nurses branch of the civil servants’ union Pasydy, the employment status of nurses under the upcoming hospital autonomy, which is a pre-requisite of the national health scheme (Gesy).

Also present at the meeting was Finance minister Haris Georgiades.

At the meeting, Pamboridis said, they discussed the possibility of the measure to kick in gradually and in “depth of time”.

“The just demand of the nurses for the scientific recognition of the sector was granted,” Pamboridis said. He added that at the meeting, they also discussed the possibility of the gradual implementation as regards the introduction of higher pay scales.

It was also agreed, he said, that the scientific recognition of the nurses’ profession will also be applied under hospital autonomy.

But meeting the nurses’ demand does not come without strings attached as the government expects their cooperation in seeing hospital autonomy implemented.

The minister said that he is to meet with the nurses’ unions in the next few days to come up with an agreement that would satisfy all sides, “and to set the terms and conditions under which we will proceed with hospital autonomy” to be presented to the president on Tuesday.

Anastasiades analysed the government’s plans to union reps, Pamboridis said as regards hospital autonomy and stressed the importance of necessary structural changes in state hospitals “to become more productive, functional and provide a healthy environment for health professionals, but mostly to provide high quality services to all patients”.

The demand of the state nurses to be paid higher wages to match their university level qualifications, was put forth in 2011. The current administration’s reluctance in granting this request citing financial issues, led in the past to a number of strikes by nurses in state hospitals.

Pasyno had argued in the past that as the government demanded that nurses had to have a university degree as a required qualification for new hirings at public hospitals, it would have to reward them in equal fashion as it does with other government workers with university degrees.

Currently, nurses with a university degree get a first annual salary at the ‘A5’ pay scale of roughly €17,000 gross. Without getting a promotion, their last salary before retirement rises to €35,000 at the ‘A7’ pay scale. With the new arrangement, by beginning their work at the ‘A8’ pay scale nurses would get a first annual salary of €25,000 gross and would retire at the ‘A11’ scale with a salary of €56,000 gross, provided there is no promotion throughout a nurse’s career.

Even though the development was welcomed by both unions, tension arose after the general secretary of Pasydy, Glafkos Hadjipetrou, said that despite that the pay scale issue being a demand of state nurses for years, the union had respected the fact that they had to wait due to the financial crisis unlike Pasyno, he said, whose members went on a 17-day strike last year to push for the immediate recognition.

“Today, with the new conditions, we put it that, immediately, nurses should be upgraded to the A8, 10, 11 pay scales,” Hadjipetrou said, whereas Pasyno, “that last year went on a 17-day strike demanding immediate upgrade, surprisingly today were discussing about [implementation] in depth of time”.

This, he said, is the result of division [among nurses] which is not beneficial for workers.

The head of Pasyno, Panayiotis Georgiou, said that although his union had put up a fight for the rights of nurses, “some, who have now realised we have progressed and are toward the end, have come to take credit”.

Hadjipetrou said that his union has requested, to avoid injustice, that the first to receive the pay upgrade should be the 2011 graduates followed by all others who had graduated from the state nursing school and who had later acquired their university degree by taking additional courses at the Cyprus University of Technology (Tepak).

“All nurses, at their own expense, had registered at Tepak and took the exams and got a university degree in 2011,” Hadjipetrou said.

The government had reached an agreement last year with Pasydy for the union’s long standing demands to be granted as regards the employment of contract staff at state hospitals, in exchange for Pasydy accepting the need to make state hospitals autonomous.

The House health committee is close to completing discussion of two bills on reforms rendering state hospitals administratively and financially autonomous. Hospital autonomy must be achieved before Gesy is implemented because under the new scheme, patients will be able to choose which doctor and which hospital to visit.

Pamboridis had announced last year that by June 2017 a public organisation would be set up which would oversee hospital autonomy. Outpatient care will be introduced by June 2019, and inpatient care by the second half of 2020.

A third of state teachers give private lessons – claim