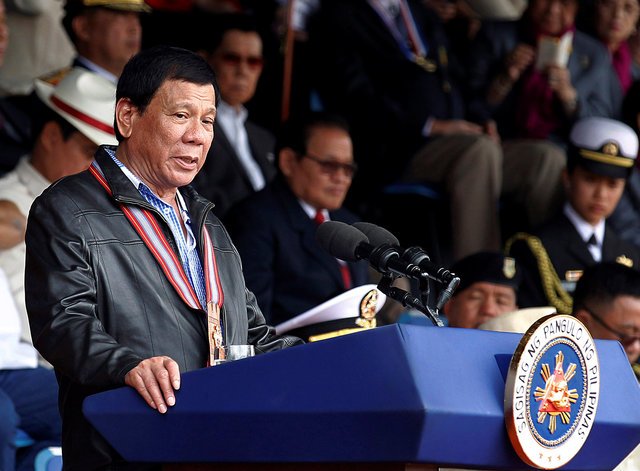 A senator and detained critic of Philippine President Rodrigo Duterte’s war on drugs has warned he and his “blind followers” will pay for ignoring alleged extrajudicial killings, and should stop trying to fool the world their crackdown was above board.

Leila de Lima, who last year led a Senate probe into alleged summary killings during Duterte’s anti-drugs campaign, was arrested last week and has been remanded in police detention on drug charges.

“In due time, your president and those who blindly enforce his illegal orders to kill, fabricate evidence and concoct lies will be held accountable,” De Lima said in a handwritten note posted on her official Facebook page on Friday.

The senator was responding to rebuttals by the president’s office and the police of a report by Human Rights Watch, which on Thursday challenged official accounts that thousands of killings during police operations were in self-defence.

The New York-based group said Duterte had turned a blind eye to murders by police in a “campaign of extrajudicial execution”. The president’s spokesman said the allegations, without proof, were “hearsay”.

De Lima, who is charged with facilitating drug trades in jails when she was justice minister, said the denial of state-sponsored killings and demands for proof were insults to people’s intelligence.

“Stop fooling our people and the rest of the world,” said the senator, who last week described Duterte as a “sociopathic serial killer”.

Duterte’s chief lawyer, Salvadore Panelo, said De Lima was deluded and should realise an overwhelming number of Filipinos wanted her behind bars.

“She should instead write to herself and tell herself to stop fooling herself and the people,” he posted on social network Twitter.

“She should accept reality and the truth that she created the rut she is now in.”

About 8,000 people have died since the drugs crackdown was launched in June last year, 2,555 in raids and sting operations where police said they had encountered violent resistance.

Many of the other deaths are under investigation and rights groups believe most were summary executions of drugs users, with police complicity. The authorities reject that view and blame vigilantes or inter-gang rivalry.

Duterte told reporters on Friday that his promises to kill were a warning unheeded by drug pushers, who could stop the bloodshed if they quit selling the methamphetamine “shabu”.

“Is it bad to say I will kill people for my country? It’s a warning actually to stop,” he said.

“If you stop taking shabu tonight, tomorrow I can assure no more killings connected with drugs.”