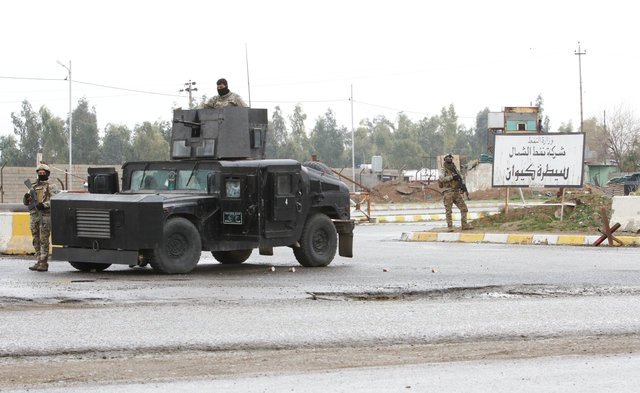 The deadly fighting erupted when Peshmerga Rojava forces moved towards the border with Syria, encroaching on territory controlled by a local affiliate of the Kurdistan Workers’ Party (PKK).

The unrest highlights the risk of conflict and turf war between the multiple forces arrayed against Islamic State, many of which lean on regional patrons for political support and arms.

The Peshmerga Rojava is made up of Kurds from Syria and was formed and trained in Iraq with the backing of Masoud Barzani, president of the Kurdish Regional Government in northern Iraq.

Friday’s clashes, which lasted several hours, pitted them against the YBS, which was set up there by the PKK after it came to the aid of the Yazidi population when the area was overrun by Islamic State in the summer of 2014.

“There are martyrs and wounded on both sides,” one security source said.

The war with Islamic State has enabled Kurds to expand their territory and influence in both Iraq and Syria, but it has also heightened competition amongst them, particularly in the Sinjar region.

The PKK’s foothold in the area has put it on a collision course with Barzani’s Kurdistan Democratic Party (KDP), which is aligned with Turkey and counts Sinjar as part of its territory.

Turkey is at war with the PKK. On Friday, foreign minister, Mevlut Cavusoglu on Friday said the group posed “a threat against the legitimate regional government in Northern Iraq and they are used by some countries against the current administration there.”

“It’s our duty to destroy these terrorist organizations wherever they are,” the minister told reporters in Ankara.

Another PKK affiliate has been in control of Kurdish territory in northeast Syria on the border with Turkey since the civil war between forces loyal and opposed to President Bashar al-Assad.

That group, the PYD, has repeatedly denied entry to the Peshmerga Rojava.

In a statement on Friday, the YBS said the fighting began when the Peshmerga Rojava tried to seize its positions in Khanasor. The YBS accused Turkey of instigating the violence.

“It is a totally provocative initiative,” the YBS said.

Most Yazidis are still displaced from their homes, but some families who returned to Sinjar fled again on Friday, including a 19-year from the town of Khanasor where the clashes took place.

“It’s a struggle between two political parties but the victims are the Yazidis,” he said on condition of anonymity. “Aren’t they supposed to be fighting Daesh (Islamic State)? Let them go and get rid of them.”