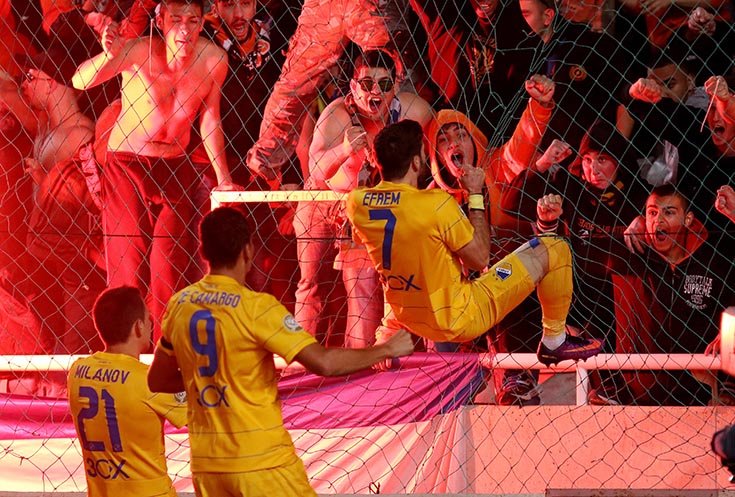 The regular season draws to a close this weekend, with the big Nicosia derby between leaders Apoel and fifth placed Omonia taking centre stage. Apollon, three points off the top, travel to Larnaca to face a vastly improved Anorthosis, while another title contender, AEK, should have no problems in bagging the three points against the already relegated Anagennisi Dheryneias.

Apoel, who saw their lead reduced to three points last Monday following their loss to Apollon, will be looking to return to winning ways against their bitter local rivals Omonia in order to maintain (at least) their three-point cushion.

This season, Apoel have managed to win just three games (out of nine) involving teams in the top six, and coach Thomas Christiansen is well aware that his team needs to start winning these games if they are to land their fifth consecutive title.

The leaders, who face Anderlecht next Thursday for the Europa League, will have three players unavailable for the crucial clash as Gianniotas is suspended and Bertoglio and Vinicius are injured, while a question mark remains over the fitness of Aztiz.

Kanas is expected to line up alongside Morais in midfield, while Christiansen, no stranger to a surprise or two in his team selections, may opt for winter signing Embezilio to play just behind his frontman Pieros Sotiriou.

Omonia come to this game on the back of an impressive 4-1 routing of AEL despite playing with a makeshift defence.

Interim coach is Akis Ioakeim expected to field largely an unchanged side as none of his crocked stars have recovered. The only certain absentee from last week’s impressive win will be Irishman Cillian Sheridan who left to join Polish side Jagiellonia on Monday.

Omonia, who have not defeated Apoel in almost four years (16 games), will have to contend with another more important absentee, their vociferous fans.

Gate 9, the Omonia fan club, threatened to force the interruption of the game if two of the team’s board members did not resign. Fearing the worst Omonia’s management decided that it was in the best interest of the club not to allocate any tickets to their fans.

The Antonis Papadopoulos has never been a happy hunting ground for Apollon and they will need to be at their best if they are to overcome Anorthosis.

Apollon, who have dropped just two points since coach Sofronis Avgousti took over, will be without a number of key players with Roberge, Zachetti and Sardinero suspended, while Maglica and Gomes are out injured.

Anorthosis’ coach Ron Levy has finally got his team ticking, notching five wins in a row and scoring 17 goals in the process.

With a top six finish guaranteed, it remains to be seen if Levy will field his best side or rest a few players for Wednesday’s second leg cup game against AEK.

Third placed AEK are at home to relegated and winless Anagennisi Dheryneias, with the Larnaca team expected to collect the three points with ease. Their talismanic midfielder Joan Tomas, who has been out injured since last October, may also make his long awaited return.

Doxa, who face AEZ today, will be gunning for their third consecutive win to keep alive their battle to avoid the drop, while an already secure Nea Salamina are at home to Karmiotissa, who after a fine first half of the season, are now in danger of getting involved in the relegation scrap.

In the final two games AEL take on Ermis in Limassol, while Aris at home to Ethnikos.

Klopp urges inconsistent Liverpool to get back on track

‘We did not expect that scoreline’, Netherlands coach Groninger says