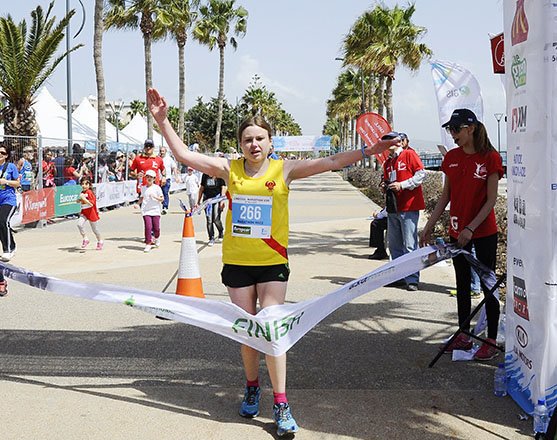 Caroline Jackson is returning after her 2015 victory

The organisers of the OPAP Limassol Marathon GSO have provided extra incentives for the participants, ensuring even more high level runners in the 2017 event which will take place on the 18th and 19th of March at the seafront area of Limassol.

For the Half Marathon, the winners will receive 1,000 euros and a new course record will offer an added 2,000 euros.

What is the feedback following the various updates to the event?
“We have more interest this year in all courses, especially the Marathon and Half Marathon. High-level athletes from Kenya, Ethiopia, Poland and Great Britain are expected to run. Also, Caroline Jackson, the winner in 2015, will be back.”

Why has the race been expanded?
“Saturday 18th of March is mostly a fun run day, with the Primetel Corporate Race 5km and the Andrey & Julia Dashin’s Foundation 1km Youth Race.
“Right after at the Sponsor’s Village in the Old Port square the Petrolina Energy Day will take place. On Sunday 19th of March we will feature the competitive races, such as the Marathon, the Half Marathon, the Petrolina Energy Race 10km and the City Race 5km.
“The two-day expansion was necessary since the seafront can’t accommodate 15,000 people at once.”

What other improvements are in place?
“We have a new timing partner, My Laps, who also work for the Athens Classic Marathon. Also, we will have more feeding points with water and isotonic drinks and also more restrooms.
“Drummers will be situated throughout the course and will present a running rhythm for the runners. And of course we will have the after party by the Guaba team at the Sponsor’s Village right after the finish, with the first beer free for the runners and volunteers!”

Since the slots are running low, those interested should enroll as soon as possible at www.limassolmarathon.com.
It’s also worth mentioning that the OPAP Limassol Marathon GSO is supporting the effort by the Karaiskakio Foundation for a world without leukemia.