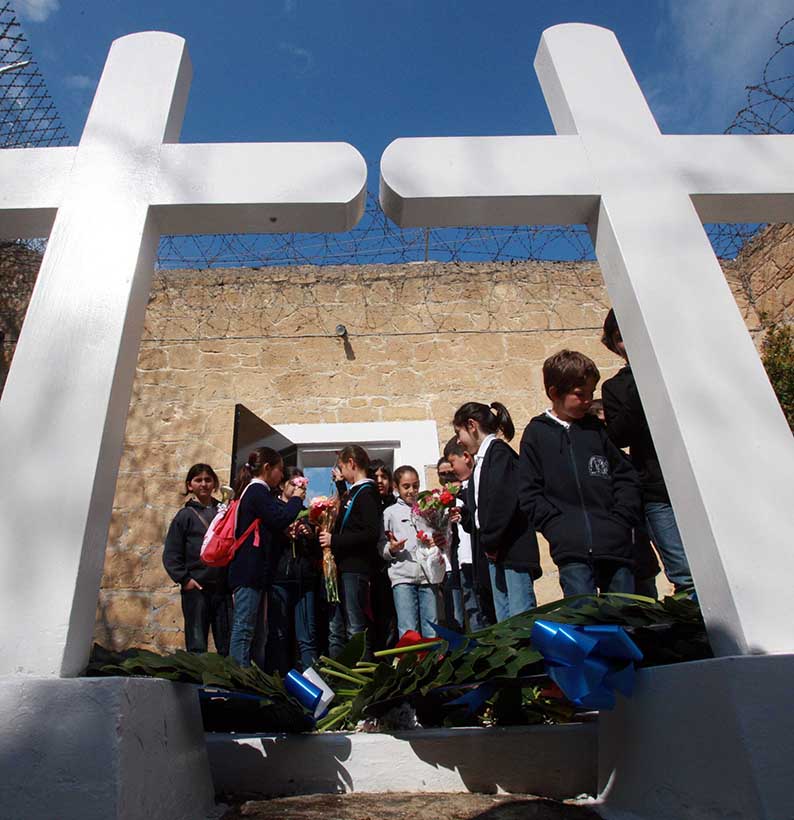 School pupils visiting the graves of the Eoka fighters ahead of April 1, the day commemorating the start of the struggle for Enosis

The leader of Akel was absolutely right when he said that everyone needs to stand back, calm down and take their responsibilities as grown-up statesmen and women over Enosis. He looks and sounds more presidential by the day and his party should think long and hard before picking any one from the present list of possible candidates for the 2018 election in preference to its own leader.

The most important aspect of the passing of the 1950 Enosis referendum regulation was not just that it was bad timing; it is also a bad law that is unconstitutional.

Jurists have known since the time of Sophocles’ Antigone that the people do not have to obey bad laws, let alone when they are not authorised by higher law.

Instead of hanging onto an outmoded version of Enosis to prove their patriotic credentials, the president and members of his party would have done a lot better had they gone to see Sophocles’ play at Salamis last year.

In Antigone they would have discovered that to be a good statesman you have to learn to swallow your pride and correct your mistakes and to be a good legislator you have to appreciate that those who make laws have a sacred obligation to obey the law.

The regulation of the Greek Communal Chamber law that provides for marking the anniversary of the 1950 Enosis referendum is plainly prohibited by the constitution of Cyprus and parliament therefore had no authority to pass it – not even as a piece of secondary communal legislation.

The historical facts concerning the aspiration of the Greek Cypriot people for Enosis – union with Greece – are well known and do not need to be recounted in any great detail, except to note that Enosis has been dormant as a national aspiration among many sections of Greek Cypriot society for many years now.

On the other hand, it forms a crucial part of the ideology of the political party that sponsored the amendment, and still has emotional appeal in some circles –  particularly in the church and the teaching profession.

The amendment providing for the celebration of the anniversary comes under the rubric, school breaks, holidays and celebrations. It provides that there ‘shall take place the reading of messages or leaflets and a few minutes’ discussion in class on the anniversary of the 1950 Enosis referendum on 15 January.’ This may appear de minimis but it is not as anodyne as it seems as the content of the messages, leaflets and discussions is not prescribed.

Articles 181 and 182 of the constitution taken together provide that the treaty of guarantee has constitutional force as a basic immutable law of the constitution. Under Article 1 of the treaty ‘the Republic of Cyprus declares prohibited any activity likely to promote, directly or indirectly, either union with any other state or partition of the island.’

The effect of the prohibitions is that citizens and institutions of the republic are free to be as Greek or Turkish as they please, but they are not free to promote the dissolution of the republic.

The object and purpose of the constitution was to set up and preserve Cyprus as an integrated independent sovereign state. This was the primary purpose of the guarantee provisions of the constitution although the use of the word guarantee was unfortunate. How this was done was by Cyprus undertaking to ensure it did not unite with any other country and accordingly prohibiting the promotion of Enosis and partition.

If the treaty stopped there no Greek Cypriot who wishes Cyprus to remain independent could take exception. The treaty however goes on to provide for the guarantor powers to step in if Cyprus does not keep to its undertaking. You would therefore think that the president and his party would do their utmost to show that Cyprus can be relied on to uphold the prohibition on promoting Enosis particularly in state institutions like parliament in order to show that foreign guarantees are unnecessary – but you would be wrong.

It is utterly incredible that just when many people, including some Turkish Cypriots, started coming around to the view that Cyprus could be relied on to enforce the law against promoting Enosis of her own volition and preserve her integrity and independence, her very own parliament in which the pro solution parties have an overwhelming majority passes a law making provision for celebrating a long forgotten referendum in favour of Enosis in secondary schools of all places. To coin an infamous question from the American election campaign, what the hell is going on?

The Enosis referendum anniversary is obviously likely to promote union with Greece –  indirectly at the very least. After all its purpose is to celebrate a referendum in which a huge percentage of the majority Greek Cypriot population voted to unite with Greece, with a view no doubt to reinvigorating it as an aspiration. Celebrating such an anniversary among impressionable schoolchildren is for all practical purposes indistinguishable from promoting union with Greece.

This is not to say that teaching – as opposed to promoting – Enosis as a history subject is prohibited in schools and other educational institutions. Indeed, restricting the teaching of history and historical research would not be compatible with the European Convention of Human Rights. Moreover, Enosis is already celebrated in schools as an anti colonial struggle on March 31 every year anyway.

In society at large the idea of identifying with Greek history, language and culture can and should be encouraged as a more sublime version of union with Greece that transcends the narrow political aspiration to be a province of Greece.

It is only activities that promote Enosis or partition as political ends that necessarily involve the dissolution of the Republic of Cyprus that fall foul of the constitution and its founding principles.

Since the day of the invasion, Russia has not had Cyprus’ interests at heart

Utilising the ghost of Enosis