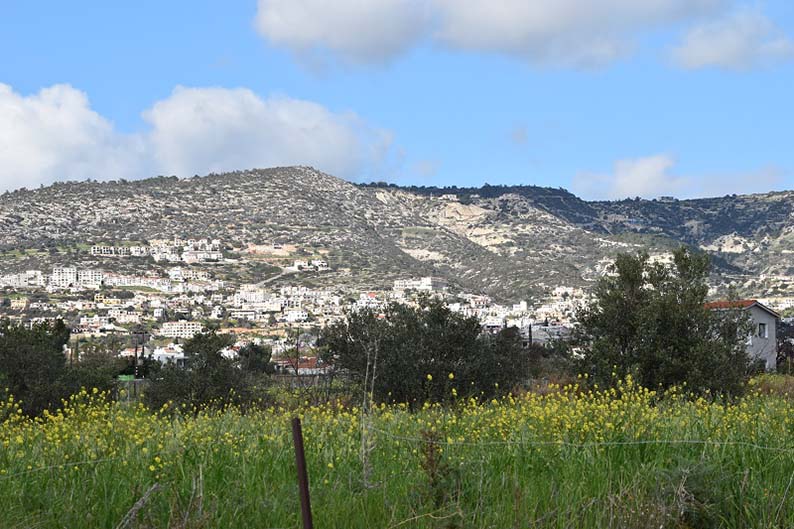 A MASSIVE development proposed for a hillside above Peyia in Paphos will irreversibly damage the environment, put pressure on infrastructure and create new homes where thousands remain empty, according to environmentalists opposed to the project.

Concerns are being raised over the project at Ayia Vouni (Sacred Mountain), even though it is being pitched as green and sustainable. It will be built next to the protected Pikni forest and a small part will also fall within the Natura 2000 network.

The development is the first of its type to be proposed since changes were introduced to building policy in 2014, concerning the promotion, regulation and control of a new type of development in the countryside which aims to provide increased building efficiency.

The project’s developer is former president George Vassiliou who acquired around 330,000 m2 in Peyia. The design, described as a ‘sustainable development project and a near zero energy settlement’, is receiving one million euros funding from the EU as part of its zero energy initiative.

Environmentalists and members of the public attended a council meeting in Peyia on Wednesday for a presentation given by representatives of the project.

One of the attendees, Klitos Papastylianou of the ‘initiative for the natural coastline and commons of Cyprus’, said that the development should not go ahead as it failed to meet almost all sustainability criteria.

“Some months ago, ahead of the meeting, we raised some concerns with the environmental impact assessment and filed an objection. According to the law on assessing, there is a definition of the environment: water, climate, habitat and so on. This project is unsustainable on almost all aspects,” he said.

Papastylianou said that under the regulations, the investor has to meet certain criteria for the project concerning the ‘strategic use’ and ‘secondary use’, the latter should be a far smaller percentage. However, he said in this case it is not.

“The strategic uses are the rehabilitation centre (medical) and a research and development centre (technology, environment and energy consumption) and make up only five per cent of this project, whereas the secondary uses, such as the village centre – with bars, restaurants, banks, shops and a gallery – as well as infrastructure, such as, roads, small dams, a waste treatment plant and residential development, will account for 95 per cent.”

In the last year, Peyia council has twice raised documented concerns over the development and requested that the town planning department refrain from approving any permits until all of the necessary studies have been completed and examined.

Some of the concerns raised include height of buildings, possible landslides and flooding,water supply and public access roads.

Peyia councillor Linda Leblanc said that the meeting raised a number of questions and the council will again write of their concerns to the planning department.

The area proposed for the project falls outside Peyia’s designated building zone, is on a steep slope and will include four storey high apartment blocks (145 units) and 125 villas. It is planned to be constructed in two phases.

Papastylianou said that as there are currently already around 6,500 buildings in Peyia with 3,000 or so already lying empty, it was nonsensical to create more. He also questioned how these would then be rented or sold.

A spokesman for the company carrying out the studies, environmental consultants I.A.CO Ltd said that there would be no ‘significant impact’ on the flora and fauna in the protected area.

“Only 0.25m2 is inside the Natura 2000 area and there won’t be a significant impact on the flora and fauna there,” he said.

He added that a geotechnical study was also carried out to identify the areas that have some geo instability. “From the entire area of the project, only five per cent have some issues, such as unstable rocks.”

In other areas, he said the bed rock is suitable and ‘stable for the development’, though some measures must be taken during construction.

“This is nothing unusual, we have studied the area and there aren’t any reasons for concern. There are solutions to stabilise the area during construction.”

He said that these geotechnical solutions would be further investigated during construction.

Papastylianou said that although the company are recognising the impact of the project, they are also claiming that it will create new jobs and help the construction sector.

“How can you say that this is a positive impact on the socioeconomics of an area when half the buildings in Peyia are already empty?”

He said that the environment of not just Ayiou Vouni, but the entire area will be affected.

“The same can be said for the landscape, as the development is on a mountain top and will be seen from all over Peyia. The mountain will be transformed instead of protected,” he said.

Water resources are another concern as it is not clear whether the water development department has enough water to supply the area.

The project will increase Peyia’s water consumption by one fourth, Papastylianou said.

“According to the relevant study, the development will need 30 tonnes of water per hour, the allowance for all of Peyia is currently 120 tonnes.”

There are also serious concerns of the geology of the area, as to the east is the Skali river and to the south west the Sterarkakon, both areas characterised by landslides. Environmentalists fear these could escalate.

“It is currently an untouched pristine natural environment and it will be totally destroyed and almost half of it sealed by concrete,” said Papastylianou.

Leblanc said there were also concerns over proposed green areas and public access as the hillside is so steep with only one entrance and exit road.

Drugs and weapons most frequent findings in road policing

Greek Cypriots call on Akinci to return to the talks