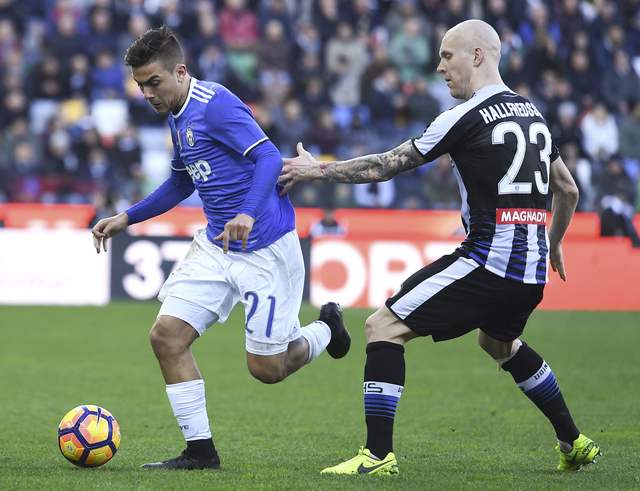 Andrea Belotti continued his remarkable season by scoring an eight-minute hat-trick in Torino’s 3-1 win over Palermo on Sunday while titleholders Juventus drew 1-1 at Udinese to go eight points clear at the top.

Leonardo Bonucci headed in a second-half equaliser to give Juve their first Serie A draw of the season which left them with 67 points from 27 games.

Second-placed AS Roma have 59 after Saturday’s 2-1 home defeat to third-placed Napoli, who are a further two points behind.

“He’s the topscorer and the best forward in Serie A, but he shouldn’t be satisfied with that because he still has room for improvement.”

Belotti’s performance prompted Mihajlovic to joke that the buyout clause in 23-year-old’s contract, which runs until June 2021, should be increased from its current value of 100 million euros.

“It’s clear that today he’s worth more than 100 million and I will speak to the president about reviewing that clause,” he said.

Torino president Urbano Cairo added: “I don’t think we can increase the amount now because I’ve only just signed the contract. But if I was going to put a price on it today, it would be 150 million euros.”

“I hope nobody comes with the money because I’d like to have him here with us,” he added.

Palermo, who remained seven points adrift of safety in the relegation zone, went ahead on the half hour when Andrea Rispoli charged forward and beat Joe Hart from 20 metres.

The Sicilians, playing their first match since flamboyant president Maurizio Zamparini resigned last week, stayed in front until Belotti, who also scored twice in the 2-2 draw at Fiorentina last Monday, sprang into action late in the game.

Belotti, who spent two seasons at Palermo, headed the equaliser in the 74th minute, then struck again two minutes later when he met Adem Ljajic’s free kick with a superb volley.

Serie A’s leading scorer completed his hat-trick and took his season’s tally to 22 with another header in the 81st minute after Palermo goalkeeper Josip Posavec again failed to deal with a cross.

Udinese stunned Juventus eight minutes before halftime when Duvan Zapata burst down the left, held off a challenge from Bonucci and scored with an angled shot that squirmed under Gianluigi Buffon.

Bonucci levelled on the hour and Juve appeared happy with that, even though the result ended a run of 10 successive wins in all competitions.

“We’ve gained another point on Roma,” said Juventus coach Massimiliano Allegri. “We didn’t play a great match but when you don’t win, it’s important not to lose.”

Lazio moved into fourth place with 53 points after two goals from Ciro Immobile gave them a 2-0 win at Bologna.

Ivan Perisic scored twice to lead sixth-placed Inter Milan to a 5-1 win at Cagliari while Genoa won 2-0 at Empoli with late goals from Olivier Ntcham and Oscar Hiljemark.

Crotone’s match at home to Sassuolo ended in a goalless stalemate as did fifth-placed Atalanta’s meeting with Fiorentina.

Cavani on the spot as PSG edge Nancy