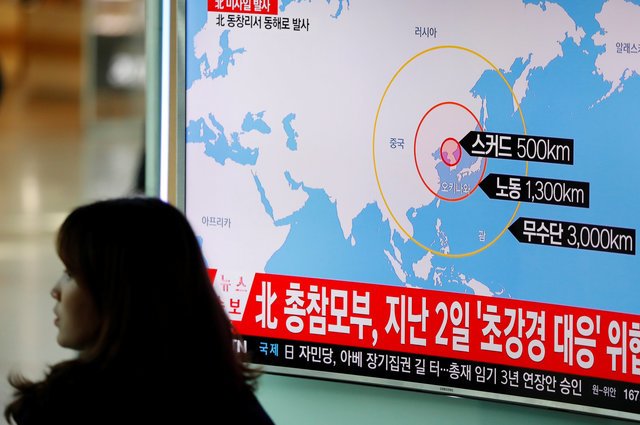 North Korea fired four ballistic missiles into the sea off Japan’s north-west on Monday, angering South Korea and Japan, days after it promised retaliation over US-South Korea military drills it sees as a preparation for war.

South Korea’s military said the missiles were unlikely to have been intercontinental ballistic missiles (ICBM), which can reach the United States. The missiles flew on average 1,000km and reached a height of 260km.

Some of the missiles landed in waters as close as 300km from Japan’s north-west coast, Japan’s Defence Minister Tomomi Inada said in Tokyo.

Japanese Prime Minister Shinzo Abe said “strong protests” had been lodged with nuclear-armed North Korea, which has carried out a series of nuclear and missile tests in defiance of UN resolutions.

“The launches are clearly in violation of Security Council resolutions. It is an extremely dangerous action,” Abe told parliament.

South Korea’s acting President Hwang Kyo-ahn condemned the launches as a direct challenge to the international community and said Seoul would swiftly deploy a US anti-missile defence system despite angry objections from China.

The missiles were launched from the Tongchang-ri region near the reclusive North’s border with China, South Korean military spokesman Roh Jae-cheon told a briefing. It was too early to say what the relatively low altitude indicated about the types of missiles, he said.

Joshua Pollack, editor of the US-based Non-Proliferation Review, said it did not appear the North had launched an ICBM.

“It sounds like a field exercise involving deployed missiles, probably ones we’ve seen before,” Pollack said.

US officials, speaking on condition of anonymity, also told Reuters there were no indications so far that North Korea had tested an ICBM.

The US military said it detected and tracked what it assessed was a North Korean missile launch, but it did not pose a threat to North America.

“All sides should exercise restraint and not do anything to irritate each other to worsen regional tensions,” Geng said, referring to both the missile launch and US-South Korean military exercises.

North Korea had threatened to take “strong retaliatory measures” after South Korea and the United States began annual joint military drills on Wednesday that test their defensive readiness against possible aggression from the North.

North Korea criticises the annual drills and has previously conducted missile launches to coincide with the exercises.

Last year, North Korea fired a long-range rocket from Tongchang-ri that put an object into orbit. That launch was condemned by the United Nations for violating resolutions that ban the use of ballistic missile technology.

North Korea test-fired a new type of missile into the sea early last month, and has said it would continue to launch new strategic weapons.

Last month’s test was the first since the election of US President Donald Trump, who has vowed to rein in North Korea and its young leader, Kim Jong Un.

Trump’s national security deputies have reviewed in recent meetings a range of options to counter the North’s missile threat, the New York Times reported. Options include direct missile strikes on the North’s launch sites and the possibility of reintroducing nuclear weapons to the South, the Times said.

Those options would soon be presented to Trump and his top national security aides, the report said, quoting US administration officials.

The United States withdrew nuclear weapons from South Korea in 1991 before the rival Koreas signed a declaration on denuclearisation of the Korean peninsula. North Korea has since walked away from the agreement, citing the threat of invasion by the United States.

“The claim that we should redeploy nuclear weapons here, 20 years after they were withdrawn, is total nonsense,” said Woo Sang-ho, floor leader of South Korea’s main opposition Democratic Party.

“I am formally asking the United States not to bring this issue up for consideration,” Woo said in a party meeting.

North Korea conducted its fifth and most powerful nuclear test last September, following what the United States said was an “unprecedented” level of activity in its banned nuclear and missile programmes.

State media said after that test Pyongyang had used a nuclear warhead small enough to mount on a ballistic missile.

The United States has about 28,500 troops and equipment stationed in the South, and plans to roll out the Terminal High Altitude Area Defence (Thaad) anti-missile defence system by the end of the year.

Japan also plans to reinforce its ballistic missile defences and is considering buying either Thaad or building a ground-based version of the Aegis system that is currently deployed on ships in the Sea of Japan.

Struggling Russia paves way to sign up over-40s for army