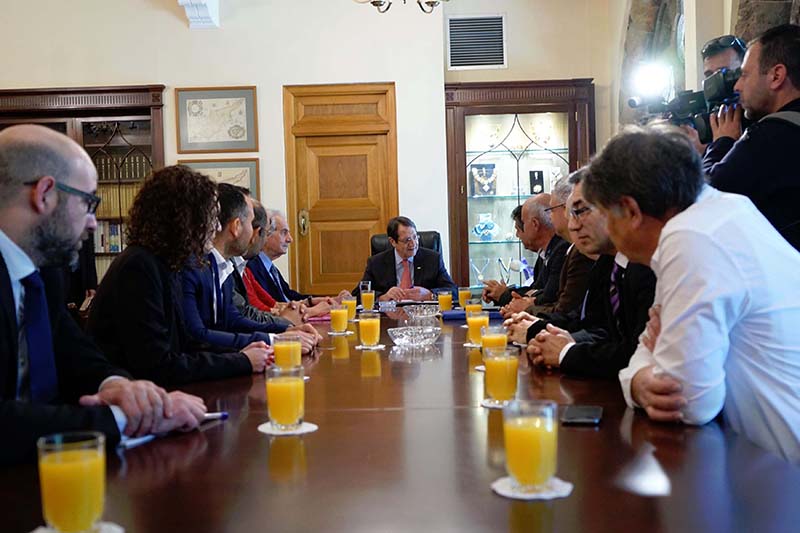 The only problem in the region that shows any sign of hope is the Cyprus problem, and a solution to it may contribute to the settlement of other regional problems, Turkish Foreign Minister Mevlut Cavusoglu said on Tuesday.

Cavusoglu said Turkey is sincere in its efforts to find a solution.

“The Greek Cypriot side has entered a campaign,” he said.

“We hope they abandon this mistake, and we will support the process. There are many problems, many crises, in our region. And there is no hope for a solution to them. Only in Cyprus there is hope. If that is solved, it may contribute to the solution of other problems.”

Earlier in the day President Nicos Anastasiades called on Turkish Cypriot leader Mustafa Akinci to return to the negotiating table for a Cyprus solution with a constructive stance to maintain the momentum of the talks and all the positive elements that have been achieved in the past 22 months.

He also urged Akinci to return to help reconvene the Conference on Cyprus, as agreed in January.
In a statement on Tuesday after Anastasiades met the Bicommunal Peace Initiative, the president expressed his readiness for a new meeting with the Turkish Cypriot leader to resume the talks from the point they were suspended in February.

Anastasiades told the BPI members that the decision taken recently by the House regarding the Enosis (union with Greece) referendum was not appropriate and unnecessary.

Akinci walked out of a meeting in mid-February over a disagreement regarding a decision by the House to commemorate the 1950 Enosis referendum in public schools.

Meanwhile, former MP and government spokesman Michalis Papapetrou urged Anastasiades to arrange for the revocation of the House decision, arguing that “if the impasse persists for a few more weeks, it will destroy not only the solution momentum, but also the huge progress that has been made over the past two years.

“Revoking the House decision will not weaken the Greek Cypriot position, but, on the contrary, it will strengthen it and make it more convincing,” he argued.

“Because our policy will become more credible and will have left behind any influence the nationalists are having on your effort, Mr President, for a solution to the Cyprus problem.”

Papapetrou then turned his attention to the crux of the ongoing crisis in the talks, and said ruling Disy should press ahead with a legislative proposal stripping parliament of the power to set commemoration policy in schools.

“I wonder why we should be celebrating an anniversary that brought us at odds with Greece and led us to today’s impasse,” he said.

“When will [Disy’s proposal] be forwarded? When everything is over and the solution effort is dead and buried?”

Papapetrou called on Anastasiades to reflect on the fact that those who praise his stance today are the ones that called him a traitor on a daily basis “until yesterday”, and urged him to press ahead with determination.

“Your political future, I hope you realise, is linked to the solution – not the presidential elections,” Papapetrou said.