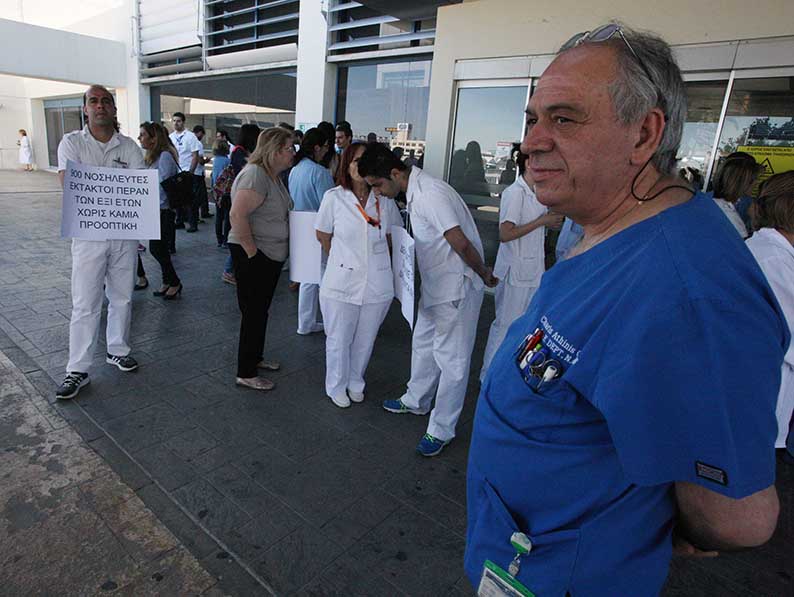 Nurses strike over pay in 2015. The government finally gave in on Friday

The government and public sector nurses on Tuesday signed a deal at the presidential palace that provides for a pay upgrade by aligning their salaries with their academic qualifications starting in January 2019.

The process is expected to be completed by January 2023.

Following the signing, government spokesman Nicos Christodoulides said implementing the national health scheme was a top priority for the government and a “necessary requirement for this critical reform were the structural changes in public hospitals and the optimal utilisation of the workers.”

The spokesman said health workers were one of the most important pillars of the reform, which could not take place without them.

“It is with this reasoning that the government was clear from the onset that any demands should not be dealt with inside a tight trade unionist framework, nor in a piecemeal fashion,” Christodoulides said.

He added that such matters should be discussed as part of the wider framework of the necessary reforms relating to the autonomy of public hospitals with the objective of implementing the health scheme.

Nurses had been demanding the upgrade for a year, following a 2009 parliamentary decision legitimising their demand that was subsequently shelved due to the economic crisis.

Nurses’ union Pasyno chief Panayiotis Georgiou said the official signing of the deal marked a “milestone” for nurses, noting that their just demand for an upgrade has finally been recognised.

“We thank the President for recognising and satisfying our just demand,” he said.

“I believe this decision will bring about peace and normalcy at state hospitals, benefiting the patients themselves.”

Later, Pasyno welcomed the agreement in a written statement, thanking Anastasiades for his “decisive intervention”.

“Pasyno publicly thanks each and every nurse who supported the union’s struggle to upgrade the profession,” it said.

Last February, state hospitals were paralysed when nurses staged a series of strikes lasting over a month, but were met with the government’s refusal to engage.

The agreement, according to the government spokesman, provides that hospitals must operated as financially and administratively autonomous units; they will have their own budget, set prices for their services, and have the highest possible autonomy as regards recruitment, promotions, and other human resource issues.

It also provides for the introduction of new, flexible working hours, new evaluation system, and a bonus scheme based on the productivity of each employee. New workers will be hired on fixed-term contracts.

“The agreement constitutes an important step in reforming the key sector of health and the implementation of the health scheme,” Christodoulides said.

News of the agreement sparked protests by other healthcare professional groups, like physiotherapists, who feel entitled to similar treatment.

“I believe they cannot be treated differently,” he said. “We are talking with people who have university degrees.”