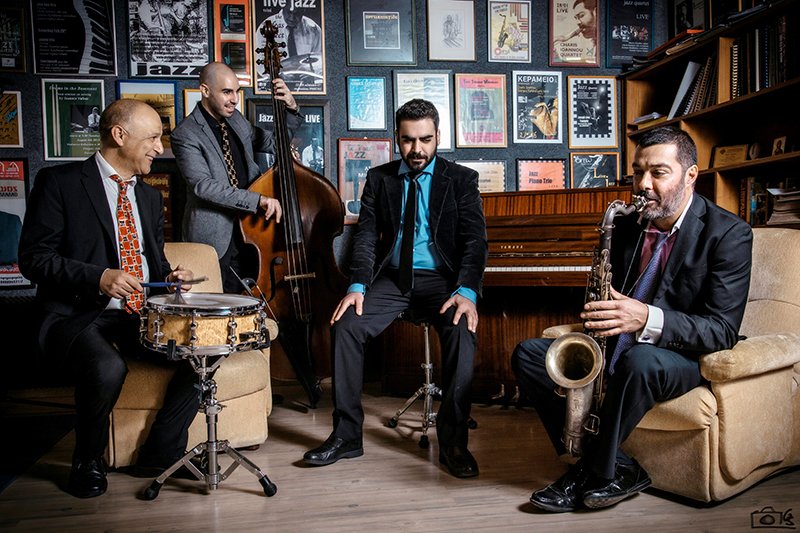 This coming Friday the Pharos Arts Foundation will present the Ioannou/Vafeas Jazz Quartet in a concert under the name of the quartet’s upcoming CD Bridge of Locks – a unique journey into jazz with the sounds of award-winning saxophonist and composer Chris Byars.

The quartet was created in 2016 after many years of collaboration and friendship between saxophonist Charis Ioannou and drummer Ioannis Vafeas. Both artists perform regularly in festivals and concert halls in Cyprus as well as the rest of Europe, and they have frequently collaborated on recordings and theatre productions. They are both graduates of the Berklee College of Music in Boston, holding a Master’s Degree in Jazz Music, and they are professors in the Department of Music at the University of Nicosia. Joining the two friends are Greg Makamian on double-bass and Dimitris Miaris on piano.

Ioannou studied Saxophone Performance and Jazz Composition. In the last year of his studies in Boston he won the Woodwind Achievement Award and in 2001 he moved to New York where he earned his Master’s Degree in Performance from the New York University. He has since appeared in all the major jazz clubs and festivals around Cyprus as well as many countries abroad. The saxophonist has collaborated with the American Embassy in Cyprus for the Bi-Communal Jazz programme Jazz Futures performing alongside the group of Ari Roland and Chris Byars for six years during the period 2007-2013. In 2015, he led BopCy, a quartet with all Cypriot musicians and won the 2nd place in the first Greek Jazz Competition. Charis currently teaches saxophone and jazz idiom at the University of Nicosia and makes guest faculty appearances at workshops held in Italy, Lebanon and Greece.

Vafeas followed his studies at Berklee with a Master’s Degree in Jazz Studies at the Boston Conservatory. He has appeared in festivals and concert halls all over Europe. Distinguished by a very personal style and technique, Vafeas started his career performing music of different styles such as pop, funk and ethnic, and having participated in numerous CDs, theatre productions and films, before dedicating himself solely to jazz in 2003. Along with fellow musicians he formed several jazz bands, such as the Café Balkan and the Cyprus Big Band, and he appeared in festivals all over the world having shared the stage with renowned ensembles and orchestras including the Moscow Symphony Orchestra. Since 2009 he teaches at the University of Nicosia.

Makamian has performed next to the legendary Freddie Redd at Smalls in New York, and has collaborated with renowned musicians including Chris Byars, Pasquale Grasso, Zaid Nasser, Keith Balla, Phil Stewart, Ofer Landsberg and John Mosca. Recently, he has appeared with the Cyprus Symphony Orchestra and the Charis Ioannou Group, presenting the music of Charlie Parker-Bird with Strings. As the bandleader of Mood Indigo, Makamian has organised public concerts all around Cyprus, presenting the finest Cypriot Jazz musicians and he has performed at many venues in New York, Greece and Cyprus.

Inspired by bassist/composers, such as, Oscar Pettiford and Ari Roland, Makamian has been working lately on a publication of his original compositions.

Miaris started classical piano lessons at the age of six. He had his first contact with jazz at the age of 16 through the “Jazz Futures” workshops by renowned musicians such as Sacha Perry, Vahagn Hayrapetyan, Ari Roland and Chris Byars. Since then he has taken part in almost all the Jazz Futures workshops and in the last two years he participated in Dr Barry Harris’ workshops in Rome. The pianist is a member of the Greek traditional band Neorebetes, where he plays the accordion and he has appeared with the band in Cyprus, Greece, Russia and Australia.

Miaris studied Jazz Piano at the Jazz Department of the Ionian University, under the instruction of George Kontrafouris, and received his Bachelor Degree in 2009.