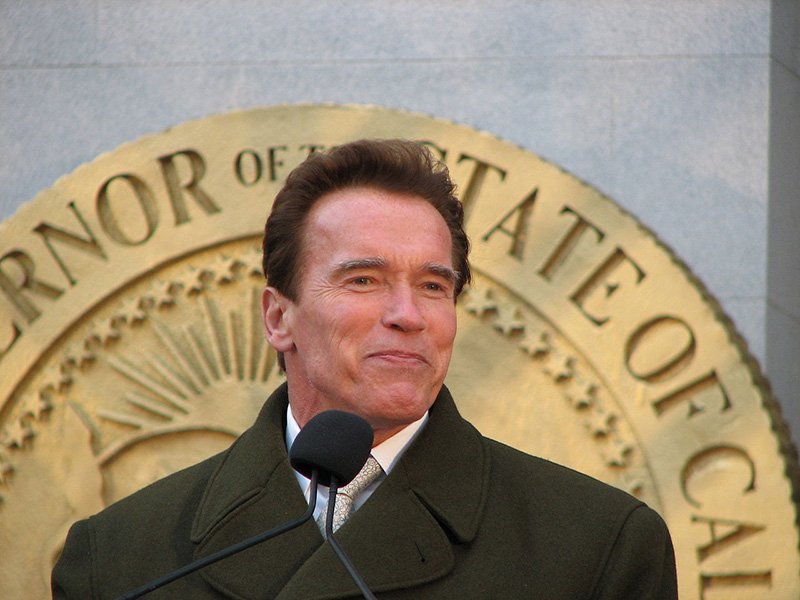 The 69-year-old actor – who recently stepped down from ‘The New Celebrity Apprentice’ after just one year in charge – believes the new US leader can’t stop tweeting about him because he is infatuated with him.

Asked about the president’s tweets, he said: “I think he’s in love with me.”

Siriux XM host Michael Smerconish replied, “Is that what it is?”, to which the former Governor of California added: “Yeah, I think so.”

The former Governor of California was more diplomatic when asked about the president’s performance so far, but admitted he doesn’t think anything can be “accomplished” unless Trump’s policies move more towards a centre ground.

He said: “I believe very strongly what Eisenhower said. That politics is like the road: the left and the right is like the gutter, and the centre is drivable. And I believe that the action is in the centre.

“I hope that the politicians wake up one day and just decide that they want to do the people’s work rather than the party’s work.

“Because the way it is right now, it doesn’t work, nothing is getting accomplished.”

The ‘Terminator’ star’s comments came a few days after the president slammed Arnold’s “pathetic” ratings as his successor on ‘The Apprentice’.

He tweeted: “Arnold Schwarzenegger isn’t voluntarily leaving the Apprentice, he was fired by his bad (pathetic) ratings, not by me. Sad end to great show.”

When he stepped down from the show last week, Arnold said he was unable to continue because of the “baggage” carried by the programme and blamed the involvement of Trump – who still operates as an executive producer on the show – for creating “division”, as celebrities no longer want to “participate” for fear of seeming as though they support his often controversial political policies.

He said in an interview with Empire magazine: “With Trump being involved in the show, people have a bad taste and don’t want to participate as a spectator or as a sponsor or in any other way support the show. It’s a very divisive period now, and I think this show got caught up in all that division.”
Meanwhile, the former Governor of California recently hit out at commander-in-chief Donald Trump after he mocked the show’s decline in ratings since he departed.

Trump urged people to “pray for Arnold” and branded the new series of ‘Celebrity Apprentice’ a “disaster” during the National Prayer Breakfast in Washington, DC, last month.

He said: “We had tremendous success on ‘The Apprentice’, and when I ran for president, I had to leave the show… and they hired a big, big movie star, Arnold Schwarzenegger, to take my place, and we know how that turned out.

“The ratings went right down the tubes. It’s been a total disaster, and [executive producer] Mark [Burnett] will never, ever bet against Trump again. And I want to just pray for Arnold, if we can, for those ratings, OK?”

In response, Arnold quickly shared a video online and suggested he and the president “switch jobs”.

He said: “Hey Donald, I have a great idea: Why don’t we switch jobs? You take over TV because you’re such an expert at ratings, and I take over your job, and then people can finally sleep comfortably again.”

Video emerges of man claiming to be murdered N.Korean’s son