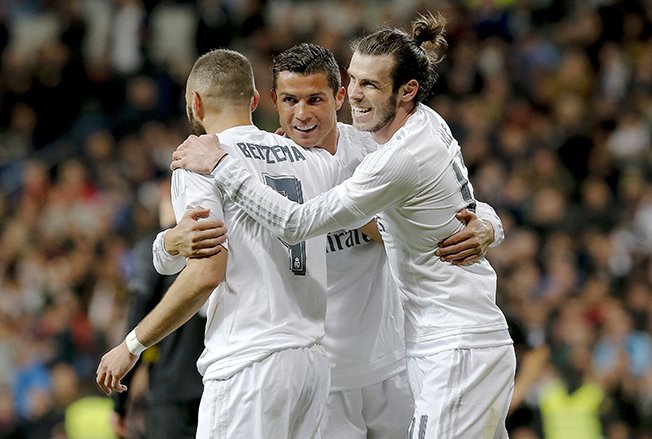 Real's expensively assembled attacking trio made just seven passes between themselves during the 3-1 win in Naples, with Ronaldo and Bale not passing to each other once

Real Madrid coach Zinedine Zidane’s insistence on Cristiano Ronaldo, Karim Benzema and Gareth Bale featuring together is under scrutiny after the Champions League holders were outplayed for long periods at Napoli despite reaching the quarter-finals.

Real’s expensively assembled attacking trio, nicknamed the ‘BBC’, made just seven passes between themselves during the 3-1 come-from-behind win in Tuesday’s last 16 second leg, with Ronaldo and Bale not passing to each other once.

Despite a 3-1 lead from the first leg, Real struggled to cope with an onslaught of pressure from the Serie A side in a frenzied San Paolo stadium and trailed at half-time to Dries Mertens’ strike after 24 minutes.

The 11-time European champions were stronger after the break and drew level with a header from a corner by inspirational captain Sergio Ramos six minutes into the second half.

An own goal by Mertens six minutes later, triggered by another Ramos header, put Real 2-1 up.

Bale, who has recently returned from a three-month layoff with an ankle injury, was replaced by Lucas Vazquez 11 minutes later and Benzema came in the 77th for Alvaro Morata, who got their third in added time, sealing a 6-2 aggregate win.

Real’s ragged performance despite the result contrasted with a fluid display in the 4-1 La Liga win at Eibar on Saturday, when Benzema started alongside Marco Asensio and Lucas Vazquez in the absence of the injured Ronaldo and suspended Bale.

Vazquez and Asensio’s work rate provided relief for Real’s midfield and full backs, who are often overworked when Bale and Ronaldo are both on the pitch.

Real have conceded seven goals and taken five points in their three league games since Bale returned to the lineup.

The season-long debate in the Spanish media about whether Benzema, Bale and Ronaldo can be accommodated in the same team resurfaced before the return leg at Napoli, a poll on the website of the daily AS (As.com) showing the real fans were overwhelmingly against the trio starting together in Naples.

Benzema reacted angrily to criticism of the attacking trio after the game, telling reporters: “They always focus on us three but we don’t just score goals, we work very hard for the team, but every time there’s a bad game they blame us.”

Zidane also leapt to the defence of his forwards.

Pressed on Real’s problems in the first half, the coach gave a curt response, saying: “We won 3-1 and that’s that.”

Hasikos in possible conflict of interests over office rent