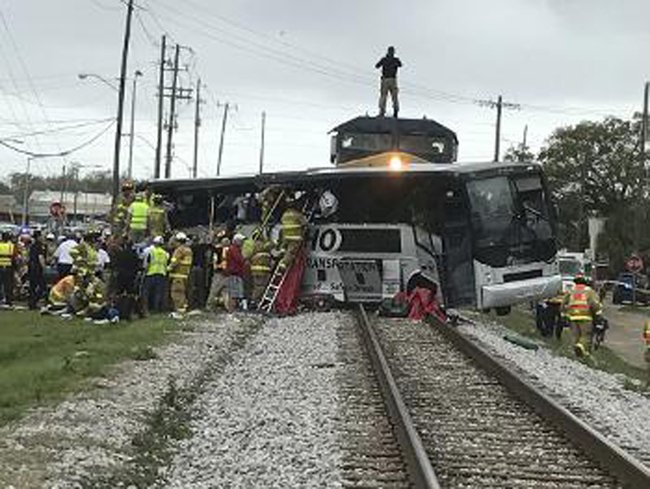 A freight train slammed into a charter bus at a railroad crossing in Biloxi, Mississippi, on Tuesday, killing four people on the bus and leaving dozens injured, officials said.

City officials said the tour bus, which originated in Austin, Texas, and was heading to a casino, was stopped on the tracks for an unknown reason. Witnesses told local television station WLOX it got stuck.

Biloxi city spokesman Vincent Creel confirmed the crossing had signs warning of its low ground clearance, which means a large vehicle could potentially become lodged on the tracks.

But he could not say if that is what occurred, adding that federal authorities would lead the investigation.

Three people on the bus were killed in the collision and a fourth person died after being transported from the scene, Biloxi Police Chief John Miller told a news conference.

More than 40 passengers on the motorcoach were transported to area hospitals and four others declined medical treatment, according to a statement on the city’s website.

Nine of the injured were in critical condition, Creel said by telephone.

The crash follows an effort by Biloxi Mayor Andrew “FoFo” Gilich to close some rail crossings, with the stated goal of improving safety in the tourist hub with a population of 45,000 people on the Gulf of Mexico.

But this crossing – the site of another wreck between a train and a truck on Jan. 5 with no injuries – was not one of those selected for possible closure, Creel said.

City officials and CSX, which operated the train, said Biloxi with its many railroad crossings has a high number of train crashes for the region.

The bus trip was sponsored by Bastrop Senior Center, Barbara Adkins, president of the Texas facility, said by phone. The passengers were members of the center along with relatives and friends, she said.

CSX said in a statement its crew members on board were uninjured.

Witness Sue Perkins told WLOX the motorcoach appeared to get stuck because it was too long for the steep angle of the hill at the crossing.

The crossing’s red lights lit up and the safety gates descended with the bus stuck on the tracks, Perkins told the station. Then she saw the train in the distance and the conductor sounded the horn but could not stop in time, she added.

“There was a big waterfall of glass that just came out of the bus” in the accident, she told WLOX.

The National Transportation Safety Board said in a message on Twitter it was sending an investigative team.

WLOX, in footage of the accident’s aftermath, showed the bus standing upright, diagonally across the tracks with the train stopped at its side.

The bus was marked as operated by ECHO Transportation, Creel said.

An official with Texas-based ECHO Transportation declined to immediately comment on the crash.