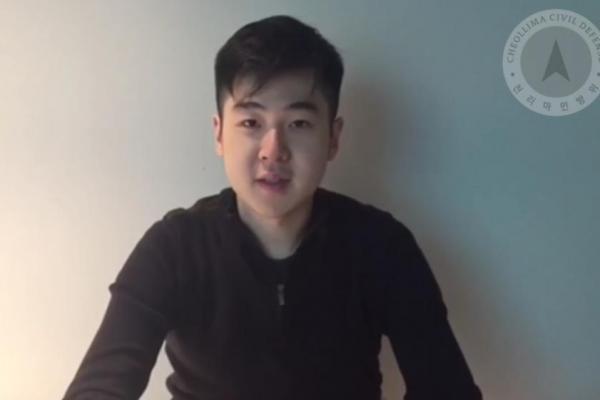 A man claiming to be the son of the slain, estranged half brother of North Korea’s leader said he was lying low with his mother and sister, in a video posted online by a group that said it helped rescue them following the murder a month ago.

The governments of Netherlands, China, the United States, and a fourth unnamed country provided emergency humanitarian assistance to protect the family, the group, called Cheollima Civil Defence, said in a statement released on Wednesday along with the video.

An official at South Korea’s National Intelligence Service said the man in the video is Kim Han Sol, the 21-year-old son of Kim Jong Nam, who was killed at Kuala Lumpur International Airport on Feb 13 by assassins who Malaysian police say used a super-toxic nerve agent that killed him within 20 minutes.

The intelligence official declined to go beyond identifying Kim Han Sol. During the 40-second video posted on Wednesday, the man says his father was killed a few days ago.

“I’m currently with my mother and my sister…,” he said, without disclosing his location or who he was living with.

“We hope this gets better soon,” he added.

Reuters could not independently verify the video. But the man closely resembled Kim Han Sol, who was last interviewed on camera in 2012 by former Finnish defence minister Elisabeth Rehn.

Kim Han Sol is the son of Kim Jong Nam’s second wife, who had been living in the Chinese territory of Macau with Kim under Beijing’s protection after the family went into exile a several years ago.

The statement released on the website of Cheollima Civil Defence said the organisation responded last month to an emergency request by Kim Jong Nam’s family members for “extraction and protection”.

It thanked the Netherlands ambassador to North and South Korea, Ambassador Lody Embrechts, for his “timely and strong response” to the group’s request for help.

Embrechts, who is based in South Korea, declined to comment on the statement.

“The three family members were met quickly and relocated to safety. We have in the past addressed other urgent needs for protection,” the Cheollima Civil Defence statement said, adding that the whereabouts of the family will not be addressed.

Cheollima is the name given to a mythical horse in Chinese and Korean folklore, which is said to be able to travel over great distances. The term is used widely in North Korea to name streets, restaurants, and other domestic brands.

In the video, Kim held up a black North Korean service passport in the video and opened it. The details were edited out, but a North Korean state stamp is visible on one page, as is a line of English text which said the passport’s validity had been extended.

North Korean service passports are issued to government officials. They are black and embossed with gold text which says “PASSPORT (FOR OFFICIAL TRIP)”.

Malaysian police have identified eight North Koreans wanted for questioning in the case, but the only people charged with the murder so far are an Indonesian woman and a Vietnamese woman who police say wiped the VX nerve agent on the victim’s face.

Malaysia is still waiting for DNA samples of the next of kin to officially verify the identity, but no family member has made contact yet.

The Southeast Asian country has said it would only release Kim‘s body to the next of kin, refusing demands from North Korea to hand over the body without an autopsy.

Arnold Schwarzenegger claims Trump is in love with him