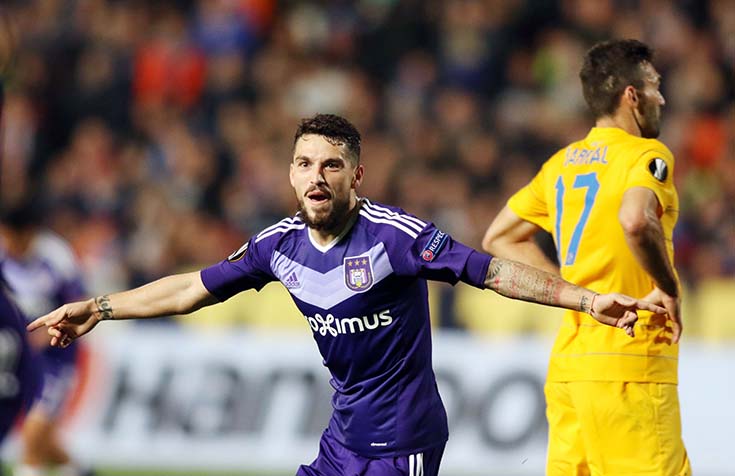 Apoel fell to their first home defeat of this season’s Europa League by a single goal against Anderlecht on Thursday night, leaving themselves with a tricky task ahead of next week’s decider in Belgium.

Thomas Christiansen was without three key players in striker Pieros Sotiriou and midfield duo Vinicius and Facundo Bertoglio, and the absences were evident. Anderlecht dictated the early stages, restricting Apoel to very little time on the ball, forcing a host of errors.

Apoel’s best moment of the first period came on 20 minutes when Giorgos Efrem pickpocketed the full-back to set up De Camargo but the striker’s effort was blocked well by the Belgian backline.

After half an hour of action, the visitors scored the opener that always looked to be on the cards given the early pattern of the game. Lukasz Teodorczyk intercepted high up the field, carried the ball all the way to the edge of the opposition before feeding in Alexandru Chipciu down the right flank. The Romanian then cut the ball back for his fellow countryman Nicolae Stanciu who placed it into the corner with precision.

There was very little to cheer about for the home faithful in the first period, who packed the GSP Stadium on Thursday night in hope of another famous European night, but a more assertive Apoel emerged in the second, as they began to throw men forward in pursuit of a leveller.

Clear chances were sparse for either side, so when a golden opportunity fell to the feet of David Barral, only for the Spaniard to screw the effort well wide with his left foot, there was a bitter feeling that the goal just would not arrive.

Apoel persisted, as Lago again picked out De Camargo with a cross and while he made far better connection this time around, it was still not accurate enough to test the keeper. A minute later, Barral did well to manufacture a yard of space before driving a low shot at the near post which needed saving from Ruben.

On 87 minutes came the most dramatic play of the game. With a free-kick some 50 yards from goal, Vander looked to bend in an assist for one of his teammates. His cross was well overhit but almost turned into a fortuitous goal, as it looped over the cross but struck the crossbar and went out.

With little time to fathom what had happened, Anderlecht sprung a quick counter, resulting in Frank Acheampong one-on-one with Waterman but the big keeper managed to deny what would have been a killer second goal.

Apoel will be disappointed with the result given their fine home form this season and overturning the one-goal deficit next week will be a tough ask. But they can count themselves a little fortunate that the tie was not out of sight from the first leg as Anderlecht’s Bruno headed wide with the goal at his mercy in the game’s final chance, leaving the Cypriots with a glimmer of hope ahead of next Thursday’s return fixture.

Diko rules out alliance with either Disy or Akel

Our View: Anastasiades’ actions give the impression he’s playing the blame game

Omonia and Man United drawn together in Europa League