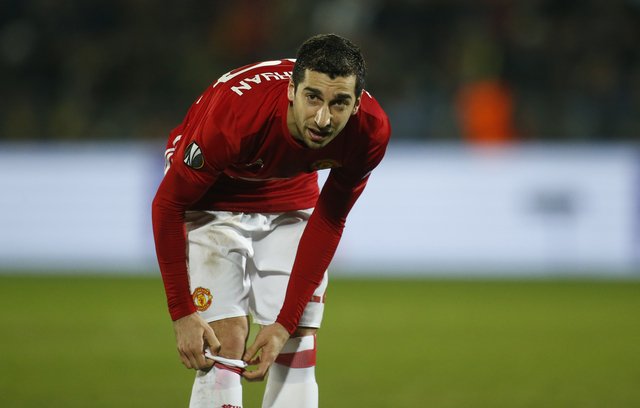 Europa League favourites Manchester United secured a 1-1 draw on a threadbare pitch at Rostov, while Olympique Lyonnais beat AS Roma 4-2 helped by a fine individual goal from Nabil Fekir in their last 16, first leg ties on Thursday.

Racing Genk won 5-2 at Gent in an all-Belgian clash and German rivals Schalke 04 and Borussia Moenchengladbach drew 1-1 in a meeting of former UEFA Cup winners.

United’s Henrikh Mkhitaryan gave the Premier League team a 35th minute lead in Russia, turning the ball in from close range after some nifty footwork by Zlatan Ibrahimovic.

But Rostov, who beat Bayern Munich on the same ground in November on their way to a third-place finish in their Champions League group, levelled eight minutes after the restart.

Alexander Bukharov volleyed past Sergio Romero for a superbly-taken goal after chesting down a long ball over the United defence from Timofei Kalachev.

Both sides struggled on a divot-strewn surface that had been heavily criticised by United manager Jose Mourinho and dust was getting into the players’s towards the end of the game.

“I remember as a kid some matches like this in Portugal – non-league and amateur pitches. To see my players coping with it and the humility to fight for every ball is a good feeling for me.”

Mohamed Salah and Federico Fazio gave Roma a 2-1 half-time lead at Lyon but the hosts hit back in style after the break.

Lyon, who had taken an eighth-minute lead thanks to Mouctar Diakhaby, levelled two minutes after the break through Corentin Tolisso helped by Alexandre Lacazette’s clever reverse pass.

Fekir put the hosts ahead in the 74th, three minutes after coming on, when he skipped past three defenders in the penalty area, moved the ball to his left foot and curled a shot past Roma’s Brazilian goalkeeper Allison.

Lacazette completed the scoring with an emphatic volley in added timee.

Gladbach’s Jonas Hofmann gave them a 15th minute lead at Schalke, latching on to a sublime through ball by Lars Stindl to beat Ralf Faehrmann from close range, before Guido Burgsteller replied 10 minutes later for the Royal Blues.

Mbwana Samatta led the charge for Genk, scoring two of their five goals at Gent. Jeremy Perbet missed a penalty for the hosts at 4-2 down before they had Anderson Esiti sent off late on.

Olympiakos Piraeus’s ex-Argentina midfielder Esteban Cambiasso gave them a first-half lead over Besiktas but Vincent Aboubakar replied to earn the Turkish side a 1-1 draw in Athens.