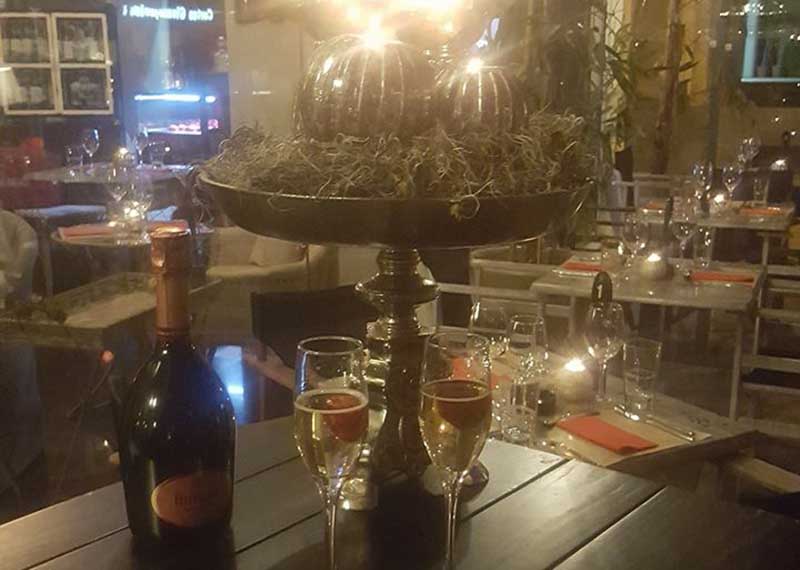 What a relief: a restaurant that pleases. My friend, Johan the Belgian gourmet, suggested this establishment – powered by one of the most sought after and enigmatic chefs on the island – and said it would provide what most diners seek, a culinary adventure that satisfied and represented value for money. I would suggest that Options qualifies on both fronts.

We arrived early on a Wednesday night and were able to park opposite the restaurant in a huge free car-park. It has the usual in&out arrangement, with more covers outside than in, and we chose to sit in the very comfortable interior that has counters at both ends of the room, one displaying the confectioneries and the other a cocktail bar with high stools. There was a provision for customers that wanted a coffee and pastry or savoury, and the central area was reserved for the serious diner. Iota, our waitress, provided the menu that came on four cards printed in English and Greek and reflects the fact that Options opens seven days a week for breakfast, lunch and dinner. There are salads, sandwiches, platters, coffee in all forms, as well as a good selection of the best of Cypriot and Greek wines supported by those from continental Europe and the New World. We have a weakness for the neglected wines of the Pays D’OC and chose the Bachellery Chardonnay – good value.

There is distinct sense that the proprietors are determined to ensure their customers eat healthily: with much mention of wilted spinach, lentils, chickpea puree, sumac and quinoa. One of the menus is headed ‘to share’. It started with a tartare of smoked salmon and sea bass garnished with tobiko and pickled ginger served on a bed of light wasabi sauce: that’s my kind of a starter. In the centre of the card was a slow cooked lamb shank served on a bed of aubergine puree dressed with fresh thyme. This was my choice only to be told that they had sold out. Damn. My attention wandered down the card to Pluma Iberico; neck of pork served with chorizo sauce and forked mashed chickpeas; this means they aren’t pureed, but slightly crunchy, the way we like them.

The offers on this card are all seriously tempting: there is a dish of Orzo (teardrop shaped pasta) cooked in Madras curry butter sauce garnished with seared prawns – the best way to eat them – fresh mussels and baby squid. The companion chose the grilled octopus served with fava santorini and caramelised shallots… I love shallots, so few kitchens use them. I settled for the Pluma Iberica. We split these between us which meant there was no chance of cooling. Our main choices were taken from a card offering Penne with leeks and prawns; grilled baby calamari, Orzo with wild mushrooms, Paella, Ravioli filled with prawns, and noodles with seafood and Teriyaki sauce. The companion settled for the ravioli and I selected the baby squid.

Not one of the dishes disappointed. I would go so far as to state it was one of the best culinary evenings in recent years. My dish arrived on a bed of yellow lentils with the wilted spinach, which means it was just shown the heat, the calamari were represented by the scoured heads, and the companion’s ravioli was one of the best meals we have had in Cyprus; the flavour was outrageous. Everything on the card and on display was made on the premises. I couldn’t manage a sweet, but the companion, in the interest of the readership, sampled an iced mango pastry; delicious.

Maria, the proprietor, revealed that they had only been open since December, and chose the spot because of the parking facility – how wise. The ambience is first rate, the service impeccable, and I am struggling to find fault; perhaps the lentils could have been a little crunchier. Oh, and the establishment is cognisant of the requirements of the fasting period.