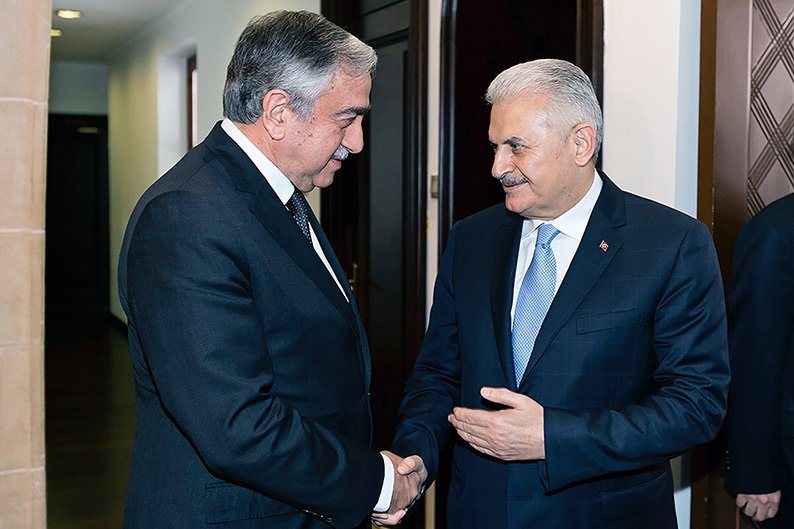 The Turkish Cypriot side is committed to a comprehensive settlement on the island, but should a solution prove elusive, the north will carry on its own path, Turkish Cypriot leader Mustafa Akinci said on Thursday.

“If a solution can be found, the ‘TRNC’ [Turkish Republic of Northern Cyprus] will become a constituent state under a federal structure. If not, then the ‘TRNC’ will not vanish, it will continue on its path.

“And then we shall all be forced to prepare for a solution entrenching the fact that in Cyprus there are two separate states,” Akinci added.

He said failure to reach a deal on Cyprus could lead to new tensions.

“This should not be read as a threat, as it is in the south, but rather as something that everyone should know.”

The Turkish PM arrived in the north on Thursday accompanied by a large entourage consisting of ministers and ruling party deputies to garner support for the April 16 presidential referendum on the constitutional powers of President Recep Tayyip Erdogan.

It is estimated that around 150,000 people living in the north are eligible to vote in the plebiscite.

For his part, Yildirim said it was time for the Greek Cypriot side to show clear will as regards the settlement negotiations and change its attitude towards the Turkish Cypriots.

He urged the Greek Cypriot side to “stop its aggressive behaviour which ignores the sensitivities of the Turkish Cypriots”.

Akıncı reiterated that the Greek Cypriots should correct their ‘enosis mistake.’

Peace talks were abruptly interrupted last month when MPs in the south decided the 1950 enosis [union with Greece] referendum should be commemorated in the Republic’s schools – a move fiercely criticised by Akinci.

Regarding the issue of the four freedoms – Turkey’s demand that the four freedoms bestowed by the EU acquis be likewise applied to Turkish nationals on the island post-solution – Akinci said that this was nothing new:

“This concept was here since the 1960s when Greece and Turkey were deemed as the ‘most favoured nations’ and the four freedoms were discussed between [former leaders Mehmet Ali] Talat and [Demetris] Christofias.”

He said it was hard to understand why it was being presented as a new thing by the Greek Cypriot side and why Anastasiades was ‘provoking’ the EU on this matter.

The Turkish officials were due to depart in the evening.

Meanwhile Turkey’s EU Affairs Minister Omer Celik called on Nicosia to reverse its decision to commemorate the 1950 vote for union with Greece.

“Cyprus is a national issue for Turkey,” Celik told the Anadolu news agency.

“Enosis commemoration in schools is opposed to the spirit of the solution and all the negotiations. They need to fix it first.”

Celik said the decision to commemorate Enosis showed Greek Cypriots were not ready for a two-state federal solution.

The sheer showmanship of the Moscow Boys in Limassol