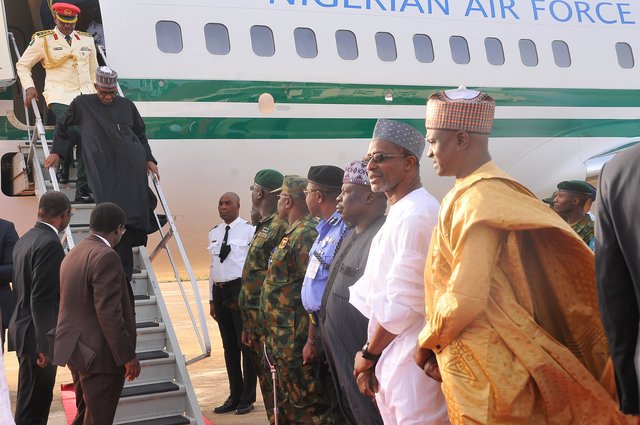 Nigeria's President Muhammadu Buhari returns from a medical trip in London at the Nigeria Airforce Base in Kaduna, Nigeria March 10, 2017

The Nigerian bourse rose to a one-month high as his return removed some uncertainty over a vacuum at the helm of Africa’s biggest economy following rumours on social media that he might get incapacitated.

Dressed in a kaftan and Muslim prayer cap, the 74-year-old former military ruler walked stiffly but unaided from his plane after it landed at an air force base in the northern city of Kaduna.

After greeting a handful of provincial and military officials, he boarded a helicopter to Abuja for meetings with Osinbajo and his top military commanders, greeting a long line of officials waiting for him at the presidential villa.

Buhari told a meeting with officials he was “feeling much better” to perform his duties, state television said.

Officials have refused to disclose details of his condition, saying only that he had undergone routine tests. This has fuelled speculation that his condition is much worse than officials like to admit.

In images released by his office on Thursday, Buhari looked painfully thin but was smiling as he greeted Archbishop of Canterbury Justin Welby in London. These had been the first official pictures in three weeks.

Buhari, who first came to power in a military coup in 1983, is a northern Muslim while Osinbajo is a lawyer from Nigeria’s predominantly Christian south, a political arrangement that reflects Nigeria’s broad geographic and religious divisions.

Reflecting his popularity in the north, policemen were wielding guns to keep at bay hundreds of cheering people running towards the runway to greet him as Buhari‘s plane landed in Kaduna, a video published by the ruling APC party showed.

He left Abuja on Jan 19 for 10 days of treatment in Britain but extended his stay on the advice of doctors.

Prior to his departure, Buhari made a point of conferring acting presidential powers on Osinbajo, seeking to allay concerns of a void at the helm.

The central bank also devalued the naira for retail customers, suggesting a wider devaluation of the currency may be in the offing despite Buhari‘s entrenched opposition to such a move.

The transparency over the temporary handover to Osinbajo stands in marked contrast to the secrecy and confusion that surrounded the illness of President Umaru Yar’Adua, who died in 2010 after a long period of medical treatment in Saudi Arabia.

A minute with Mac Shumba Pemhiwa aka Macattack