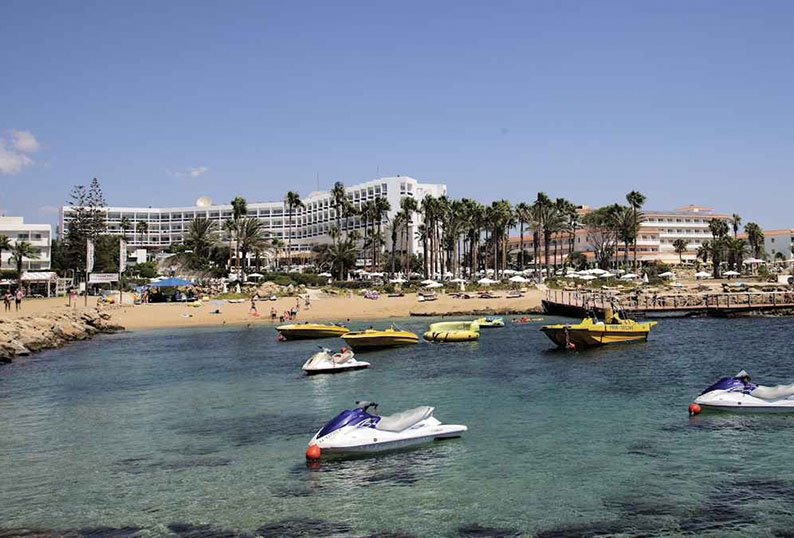 THREE Paphos hotels have been bought by Israeli investors, a move which is being welcomed by the tourism sector.

The seafront hotels are the Cypria Maris, Cypria Bay, and Laura, and offer a full room-and-board basis holidays.

Head of the Paphos hoteliers Euripides Loizides told the Cyprus Mail: “There is a demand and so this is a positive move for the industry in Paphos. The Laura was sold to an investor from Hong Kong, it is in need of investment, but they ran out of money. The new investor is Israeli, he purchased it this year along with two other hotels. It is generally good for Paphos,” he said.

According to an announcement on ‘Globes’, an Israeli financial daily, website, ISSTA , Israel’s largest tourist company, and the Fattal Hotel Management Ltd. chain have announced their joint acquisition, in equal shares of the three hotels at a cost of around €80 million.

The Cypria Bay Hotel has a number of large swimming pools, a covered pool, a fitness room, spa, and restaurants and all rooms face the sea. The Cypria Maris Hotel is currently undergoing renovations on all its rooms and facilities include pools, a tennis court, a spa, and four restaurants.

The Laura Hotel has a water park, pools, two restaurants, a spa, a fitness room, and extensive public areas.

According to Globes, the joint acquisition follows the Fattal chain’s international expansion, and is part of ISSTA’s tourism-focused real estate expansion strategy.

Paphos municipality was twinned with Herzliya in Israel last year and is strengthening ties with the ‘Silicon Valley’ of Israel, home to many high-tech companies. Residents of Herzliya are among the wealthiest in Israel.

ISSTA Israel and the Fattal chain will be responsible for marketing holiday packages for these hotels to Israelis, Fattal will also manage the hotels.

The Fattal Hotel Chain is Israel’s largest and manages 38 hotels in Israel and 85 in Europe.

In 2007 Fattal hotels expanded its operation to Europe, and opened its first hotel in Europe in Berlin.
Since then the hotel chain has expanded to other parts of Germany, Switzerland, Austria, Belgium and Hungary. It also recently acquired hotels in Madrid, Amsterdam, Slovenia and Scotland.

Globes reported that ISSTA and TUS Airways will operate a minimum of four weekly flights from Haifa to Paphos, in addition to the existing flights to Paphos from Ben Gurion Airport, in order to offer a wider range of holiday packages.

Fattal chairman and CEO David Fattal said: “Paphos, which was recently selected as Europe’s cultural capital, has for years been an extremely attractive destination for tourists from the UK and Russia. This acquisition is aimed at making Paphos accessible to the Israeli tourist and an attractive designation for Israeli vacationers.”

Our View: Police appear to be doing a good job of boosting public trust