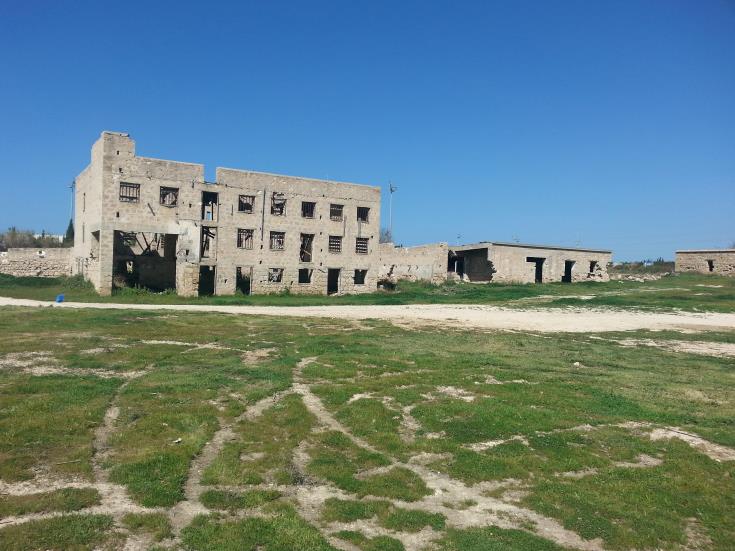 Gerokipia farm will need about seven million euros to restore

The Gerokipia estate played a central role in village life for over 500 years. It is now in urgent need of restoration

LOCAL authorities, residents and supporters of an impressive but crumbling 15th century farm estate in Geroskipou are appealing to the government to allocate the necessary funding to restore it to its former glory.

Geroskipou mayor, Michalis Pavlides, said that an investment of around seven million euros is needed to achieve the municipality’s ambitious plans for the extensive Gerokipia estate.

Situated near the Paphos water park, the farm was a major employer in the region since Ottoman times, and is famous for the colourful German couple who owned it for much of the 20th century.

“The municipality wants to turn the farm into a dynamic, modern, sustainable and multi-functional cultural space of local and national importance,” Pavlides told the Sunday Mail.

He said that the buildings are of particular historic importance and must be prevented from collapsing. The cost of implementing a proposed architectural design will amount to around seven million euros, which the authority aims to secure through national and European funding, he said.

“We won’t be getting any money from the EU Structural Funds 2014-2020, as this has been given to the four big municipalities: Paphos, Limassol, Larnaca and Nicosia,” he said, adding that he was looking for other available EU funds.

On Friday, Pavlides took the minister of agriculture, Nicos Kouyialis, on a tour of the crumbling buildings.

“I wanted him to get an idea of what it’s all about and how important it is to Paphos, and to discuss possible state funding,” he said.

“The farm is a fine example of rural architecture and therefore its buildings declared ‘preservable’. It is an integral part of the cultural heritage of Geroskipou and is connected with the life of the inhabitants in the 20th century.”

In 2004, the municipality successfully had buildings declared listed by the minister of the interior and proposed plans for the structures were completed in 2013. The municipality covered most of the cost, paying €213,973 whilst the state provided €97,600.

The architectural plans envision the farm transformed into a magnificent cultural centre including an agricultural museum, eight rooms to be used for hospitality – including events such as exhibitions – a restaurant, café and a theatre.

The mayor explained that the farm had passed through the hands of numerous owners since it was first constructed in the 15th century. The entire estate was rented to Geroskipou municipality 15 years ago. Prior to that, it was owned by the Cyprus Tourism Organisation, which showed no interest in it at all, he said.

“The great destruction of buildings was made long before the municipality took over the management of the estate. We should intervene because the buildings have begun to collapse owing to abandonment, and also because of the effects of the weather and theft of building materials,” he said.

In the history books of Geroskipou, the estate is described as one of the largest ‘chifliks’ in the region. A chiflik is a Turkish term for a system of land management which was adopted during the Ottoman Empire.  It extended around 1,630 hectares and held a significant role in the history of Geroskipou, employing many residents and providing much of the produce for the area.

Its most recent private owners were a German couple, Karl and Emilie Widmaier, who had both been army doctors. They purchased the Gerokipia estate in 1929 from the previous owner, Leandros Kakogiannis, who had gone bankrupt in the economic crisis of 1929-1932.

Widmaier died in 1936 and his wife took over running the estate until her death in 1976. Following the death of her sister Carolina, who was her heir, the estate passed onto the government, who later allocated separate plots to ‘landless’ residents of Geroskipou.

The Widmaiers were not professional farmers and created quite a stir in Geroskipou with their somewhat outlandish farming methods. Widmaier favoured a camel to pull his iron plough, and used other animals to pull his harvester. But they also made a significant improvement to the methods of land cultivation.

The farmer was reportedly the first to import a tractor with spiked wheels.

The farm was also self-irrigated using a large water cistern, and also had a number of sheds where huge amounts of nettles were dried out before being shipped to Germany for use in the pharmaceutical industry.

The buildings also provided pens and stables for animals. Their crops were mainly wheat, barley, beans, vetch, cotton, onions and other vegetables.

“Since the death of the last owner, the farm was abandoned, for almost half a century. Apart from the municipality, many residents have mobilised to rescue the farm because they are interested in the cultural heritage of Geroskipou,” Pavlides said.

Andreas Evlavis, secretary of the Paphos Green party said that the mayor has the full backing of the Green party for his vision of the project.

“Our MP George Perdikis has assured that he will raise the matter of funding the project as soon as possible at parliament. It is very disappointing that the government, yet again, did not mention anything about the farm in its budget.”

He warned that Geroskipou would lose something precious and historic if interventions are not made before such an important piece of history collapses completely.

Tales from the Coffeeshop: High diplomacy at our ministry of foreign delusions