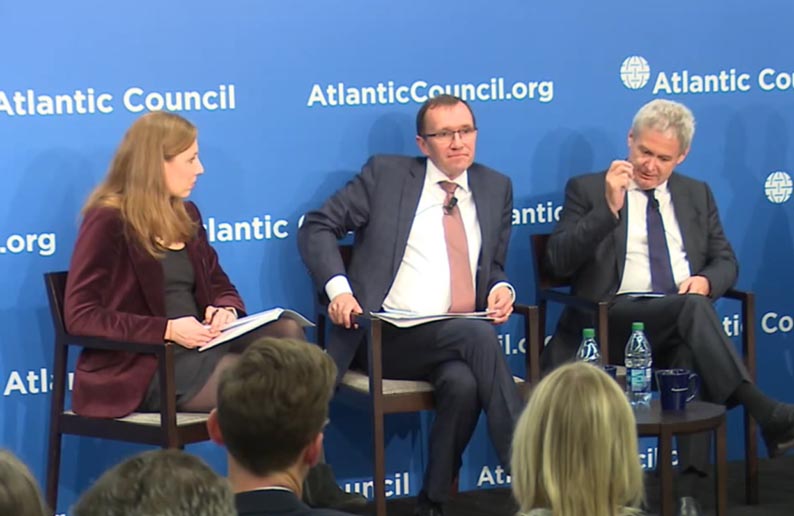 Andreas Mavroyiannis (right) displayed all the qualities – arrogance, high self-regard, moral superiority, and mean-spiritedness - that make the majority of Cyprus foreign ministry employees so unlikeable and insufferable to other people

THE SACRED cow of Cyprus politics, goody-two-shoes negotiator, Andreas Mavroyiannis, displayed his true self, at Wednesday night’s panel discussion in Washington, organised by the Atlantic Council think tank, confirming what our establishment has always said – you can take a diplomat out of the Cyprus foreign ministry but you can never take the foreign ministry out of the diplomat.

On Wednesday night Mavroyiannis displayed all the qualities – arrogance, high self-regard, moral superiority, and mean-spiritedness – that make the majority of Cyprus foreign ministry employees so unlikeable and insufferable to other people. He presented his foreign ministry credentials after the moderator Sara Stefanini, a senior policy reporter with Politico, gave the floor to the “representative from the Turkish Cypriot foreign affairs ministry.”

Once the representative, Ismet Kuroglu, had demanded political equality and claimed Turkish Cypriot negotiator Ozdil Nami was not present because he had not been given adequate notice by the UN, a stern-looking Mavroyiannis asked to speak and in a didactic tone said:

“And I mean nobody can impose on anybody or the UN Special Representative where he will go or where he will not go and by the way I have to say that Ozdil, who is a very close friend of mine has been informed about this the same moment I was informed; there was no difference and of course as I mentioned myself he would be most welcome to be here and I wanted him, I tried to persuade him to be here.”

FOREIGN ministry employees are trained to be mean-spirited and sanctimonious when dealing with the uppity Turkish Cypriots, but you would have thought Mavroyiannis, being our negotiator, employed to resolve differences with the other side, would not have been so aggressive in public, unless he was showing off to the super-patriotic members of the Greek lobby in the audience.

So did he really have to get so self-righteous when the moderator referred to the Turkish Cypriot ministry of foreign affairs? Was there a danger of the north being recognised if he did not intervene to inform everyone that there was no Turkish Cypriot foreign ministry or does he just enjoy pissing off the Turks and putting them in their place?

Our petty-minded foreign ministry employees just cannot pass an opportunity to score such diplomatic triumphs, especially when there is an audience. They usually issue an announcement afterwards to advertise these great victories and pose as national heroes. This is what always passed as high diplomacy at our ministry of foreign delusions.

I particularly enjoyed the patronising way in which Mavroyiannis spoke about his “very close friend,” Ozdil, whom he also accused of lying about the invitation. I suppose such rudeness is demanded by our ministry’s diplomatic etiquette manual for dealing with the horrid Turks.

Anyone who wants to watch Mavroyiannis’ heroic rant can click on https://www.youtube.com/watch?v=atmFQTzeDUA at the 1 hour and 5 minutes mark.

IF YOU go a minute back you can also hear the Turkish Cypriot man from the foreign ministry that does not exist, moaning about Nami not being present at the panel discussion, because he did not get the invitation from the UN on time.

If you cannot occupy the moral high ground in the Cyprob stakes – how can you when faced with highly-trained moral mountaineer Mavroyiannis – you can take the role of badly-treated and wronged victim. Espen Barth Eide said the reason Nami received the invitation late was because the UN had sent it to an email address that he did not open regularly.

Someone must inform the Turkish Cypriot side that it cannot claim victimhood as a result of a UN cock-up.

MAVROYIANNIS has reverted to behaving like a product of the foreign ministry, because his boss appears to have lost interest in a settlement and is now focusing on his re-election. Nik was helped in this by his buddy Akinci refusing to return to the talks over the Enosis farce, and is now engaging in a major blame-game campaign so as not to alienate pro-settlement voters.

This suits his government spokesman Nicos Christodoulides, another member of our rejectionist foreign ministry, who grudgingly spoke in favour of the peace process – it was his job – when it was going well. Now that talks have ground to a halt, Nicos has re-discovered his enthusiasm and passion for life, perched on the moral high ground and having a go at Turkey’s unreasonable demands.

Prez Nik’s trip to Brussels for the European Council was used to back the government’s oft-repeated position that there would be no movement on the Cyprob because the Turkish government was dealing with the April referendum. We have been hearing this, from the government every day for the last two months, but still do not know if there is any truth in it.

Sensing that this version required some corroboration, Christodoulides informed us on Friday that this view “emerged from the contacts of the President in Brussels and from his discussions at the European Council.”

Nik told Nicos, who then told the Trito listeners, that foreign leaders, supposedly said that “with the forthcoming referendum in Turkey, the Turkish government and president were dealing exclusively with this issue so we shouldn’t expect them to deal seriously with the Cyprus problem.”

It was “a very clear position that emerged,” said Christodoulides. As clear as the position that with the forthcoming presidential elections Prez Nik is dealing exclusively with this issue and we shouldn’t expect him to deal seriously with the Cyprob.

PREZ NIK has made a habit of telling us what he wants us to hear and attributing it to someone else so it would have more credibility. He gave a demonstration of this technique after meeting the Commission president Jean Claude Juncker.

After the meeting Tass news agency reported there was “an identity of views with regard to the Turkish demand for the four freedoms.” The report added: “Juncker agreed with the President of the Republic that the unacceptable Turkish demand for the four freedoms was not a bilateral issue, but an issue for the whole of Europe. The demand could on no account be accepted.”

Our prez was the sole source of this information. Juncker said nothing in public about the meeting, he did not issue an announcement, nor did any of his spokesmen divulge such information. A couple of hours later, Tass issued a second report, deleting the last line, implying the EU would not accept the demand and replaced it with the following: “The position of the Cyprus Republic is that the demand is unacceptable and cannot be accepted under any circumstance.”

Someone had obviously complained that the Tass report was incorrect in claiming Juncker had embraced Nik’s view. The truth is the European Commission would agree not to four but to 24 freedoms for Turks in Kyproulla if this would lead to settlement.

IN AN INTERVIEW broadcast by Greece’s TV channel Skai, Prez Nik was asked whether he would seek re-election and replied the “last thing on my mind are the elections.” He had not made up his mind yet. “When the time comes, I will decide if I will stand, consequently, it is not an issue to deal with one year before the election.”

The prez said that in the year left he would intensify efforts to tackle internal problems (like satisfying the pay demands of nurses and doctors?) and there would also be “more intensified efforts in the hope of achieving a solution of the Cyprus problem.”

If anyone thinks the prez was engaging in fake news, claiming the election was the last thing on his mind, they should not. Spokesman Christodoulides had said exact same thing a week earlier so it must be truthful fake news.

WHEN the Skai interview was filmed, a week before it was broadcast, Nik had commented on the Greece-Turkey tension and expressed the view that there could be an incident in the Aegean. However, this was edited out of the version that was broadcast on the request of Nik.

The reason. A day after he gave the interview, Greek media, crediting unnamed military sources (a.k.a. as the defence minister Panos Kamenos), said the Turks would cause an incident off Cyprus in June. The Cyprus government was furious as such reports could have a negative impact on tourism and issued denials questioning the reliability of the information.

Having, understandably, reacted in this way, Nik’s comment about an incident in the Aegean had to be taken out of the interview, as he would have sounded as irresponsible and impetuous as Kamenos, which should not be an easy thing to achieve.

PRESIDENT Putin’s Friday meeting with President Erdogan in Moscow, which lasted two-and-a-half hours was not given much prominence by our media. Perhaps this was because Putin did not repeat his country’s principled position on the Cyprob during the meeting, nor had he tried to persuade Erdogan that the system of guarantees was unacceptable.

The two agreed to set up a one-billion-dollar joint fund for investments, while the Turkish Stream gas pipeline project and the nuclear programme were on course; visa-free travel between the two countries would also be re-introduced. With relations between the two countries improving, Erdogan might even persuade the government of mother Russia to abandon its principled position on the Cyprob and support efforts for a settlement.

BACK in Kyproulla, the Diko executive committee met to discuss the presidential elections. Despite the fact that many Dikheads urged Junior to announce his candidacy, he disagreed and proposed that no names were announced before there had been consultations with all the other rejectionist parties. They dutifully agree with their wise leader.

The party reached a unanimous decision about the 2018 elections in which the Cyprob featured prominently. It slammed Nik and Disy for the “failure of their strategy and tactics”, a policy that “had been proven to take us further away from the right solution.” Only a complete Dikhead would believe that the election of Junior to the presidency would take us closer to a solution, even the wrong one.

THE BALL-BUSTER bank bondholders will hold an electoral conference in Chirokitia next Sunday in order to elect the Association’s new president. The association’s president would be a candidate in the presidential elections. The decision was taken after a meeting they had with Prez Nik proved unsuccessful. Surprisingly, he did not promise to compensate them.

The bondholders have not yet decided their position on the Cyprob, but one proposal is that they would offer Paphos to Turkey if it covered 60 per cent of their bank bond losses. The bondholder president would also throw Larnaca into the offer if the Turks agree to full compensation.