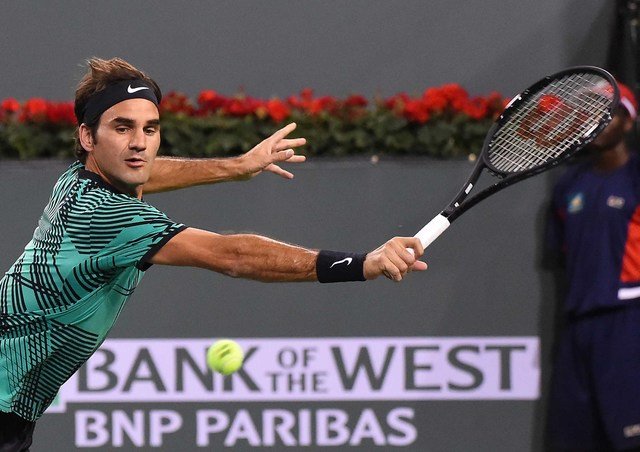 Roger Federer enjoyed the relative cool of an evening match but was back in the locker room before working up a major sweat, easing to a 6-2 6-1 win over Frenchman Stephane Robert

Roger Federer and Rafa Nadal are on course for another showdown after winning their opening matches at the BNP Paribas Open in the California desert on Sunday.

Less than two months after Federer claimed an 18th major title in a classic Australian Open final, the two great rivals could meet again, this time in the fourth round at Indian Wells.

Both won in style on Sunday, with Spanish fifth seed Nadal pouncing on Guido Pella’s serve to break the Argentine five times en route to a 6-3 6-2 victory in sizzling afternoon heat on the stadium hard court.

Federer enjoyed the relative cool of an evening match but was back in the locker room before working up a major sweat, easing to a 6-2 6-1 win over Frenchman Stephane Robert in front of an appreciative capacity crowd of around 16,000 spectators.

“The beginning was difficult, just because I’ve never played him before so I’m not sure about his patterns,” ninth seed Federer said in a courtside interview.

“I was very happy I was able to loosen up and play good tennis. I started to serve really well, move around the court great.”

While it was Federer’s first match against Robert, he is far more familiar with Nadal. They have met 35 times, with Nadal holding a 23-12 edge.

“For sure I saw the draw,” a relaxed Nadal said, adding that he was not really focused on Federer.

“I go day-by-day. That’s my way, to focus on my next match. I played I think a solid match (today).”

The path to the final on that side of the draw is littered with tricky obstacles, however, as second seed Novak Djokovic and in-form Australian Nick Kyrgios lie in wait as potential future opponents.

Djokovic, however, must next negotiate a dangerous third-round opponent in Argentine Juan Martin del Potro after the three-times defending champion advanced with an unconvincing 6-4 7-6(5) victory over Briton Kyle Edmund.

“First match, already a big test,” the Serb said at a tournament where all the seeded players had first-round byes. “Throughout most of that second set, he was a better player. I got lucky to pull through in straight sets.

Marin Cilic was the only top-ranked player to lose on Sunday, the Croatian sixth seed beaten 4-6 7-5 6-4 by American teenager Taylor Fritz.

The tournament lost its top seed on Saturday when Andy Murray was upset 6-4 7-6(5) by Canadian Vasek Pospisil, who rushed the net whenever the opportunity arose and also feasted on the Scot’s second serve.

Murray praised his conqueror, while at the same time lamented an off night with his second serve.

“I have never really practised playing against serve-and-volleyers in my career but when I have come up against them, it’s normally been a game style I have enjoyed playing against,” Murray said.

“It wasn’t so much the serve-volley that was the problem. It was my own serve and not getting enough opportunities when he was serving.”