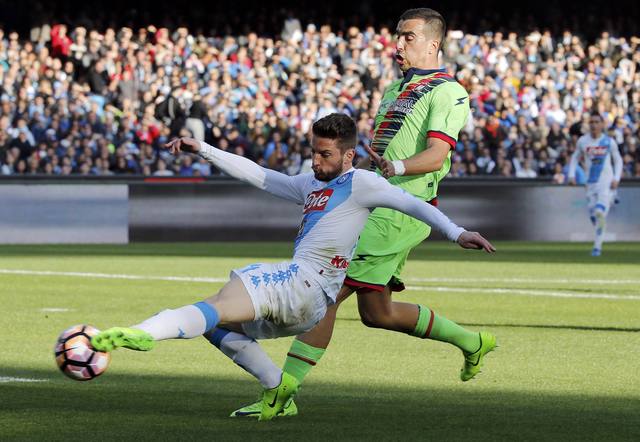 AC Milan came within seconds of ending Juventus’ 17-month run of home league wins before a hugely controversial penalty gave the Serie A leaders a 2-1 win in a stormy match on Friday.

The penalty was awarded for handball by Mattia De Sciglio although Stephan Lichtsteiner’s cross hit him at point-blank range and, in any case, appeared to strike his stomach rather than his hand.

After a long consultation between the referee and the goal-line assistant, and amid furious Milan protests, Paulo Dybala converted the spot kick in the seventh minute of stoppage time to give Juventus their 31st home league win in a row.

Juve pulled 11 points clear of second-placed AS Roma who visit Palermo on Sunday. Milan, whose more modest aim is to qualify for the Europa League, are seventh.

Television pictures showed that Milan goalkeeper Gianluigi Donnarumma, who nearly got a hand to Dybala’s penalty, said “it’s not possible, it’s always them” to team mates as he left the field.

Dybala offered no apologies. “They’ve been complaining about Juve for six years,” the Argentine told touchline television reporters. “Maybe they should try another way of beating us and not just complain about the referee.”

However, Milan coach Vincenzo Montella managed to keep his cool and apologised for the angry reaction of his team.

“I’m sorry for the scenes at the end but there was a lot of tension and frayed nerves,” he said.

“There’s no point in complaining. We have to focus, stay calm, accept that referees make mistakes and leave them in peace.”

His opposite number Massimiliano Allegri declined to discuss the referee and said he had already resigned himself to a draw.

“The game was over,” said the Juve coach. “I was already in the tunnel and I preferred not to see the penalty.”

Defender Mehdi Benatia gave Juventus the lead on the half hour from close range but Carlos Bacca levelled two minutes before halftime when he prodded the ball past Gianluigi Buffon from Gerard Delofeu’s pass.

Juventus, involved in similar controversy when they were awarded two penalties in a 3-1 Coppa Italia win over Napoli 10 days ago, dominated the second half but could not seem to find a way past Donnarumma.

The 18-year-old Milan goalkeeper produced a superb double save when he parried Sami Khedira’s shot and then tipped Gonzalo Higuain’s effort around the post from the rebound.

He made another outstanding save to block an Higuain shot in stoppage time but Juventus were awarded the penalty immediately afterwards.

Milan were down to 10 men by that time after Jose Sosa was sent off for a vicious sliding tackle.
Summaries from the Serie A matches

PSG begin recovery from Barca defeat with win at Lorient