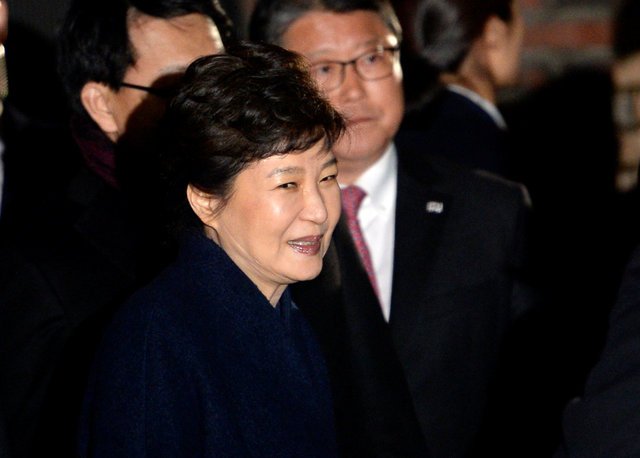 Ousted South Korean leader Park Geun-hye faced criticism on Monday over a defiant vow that the truth of her impeachment would be revealed, with the main opposition party urging prosecutors to investigate her quickly.

The Constitutional Court dismissed Park from office on Friday when it upheld a parliamentary impeachment vote over an influence-peddling scandal that has shaken the political and business elite. Park has denied any wrongdoing.

Park left the Blue House presidential palace in Seoul on Sunday evening to return to her private home in the city as an ordinary citizen, stripped of her presidential immunity that has shielded her from prosecution.

“Even at the moment she left, she refused to say a word to repent in front of the people, but said such and such about truth and declared nothing but disobedience,” Choo Mi-ae, head of the biggest opposition party, the Democratic Party, told a meeting on Monday.

Park has not commented publicly since the court ruling, but a spokesman read out a statement from her after she returned to her home in the upmarket Gangnam district, in which she expressed regret at not being able to complete her term.

“It will take time, but I believe the truth will be revealed,” Park said through the spokesman.

Many South Koreans have interpreted that as a protest against the Constitutional Court’s ruling.

“It was very shocking and regrettable,” said Yoo Seong-min, a presidential candidate from the small, right-wing Bareun Party.

South Korean shares rose to their highest in more than 20 months, as sentiment improved on hopes that Park’s dismissal would end uncertainty.

Moody’s Investors Service said Park’s impeachment was “credit positive” as it would allow a new president to focus on reforms to address “structural economic challenges amid growing domestic and external headwinds to growth”.

A snap presidential election will be held by May 9. Moon Jae-in of the Democratic Party is the favourite in opinion polls.

The impeachment has exposed divisions in a society in which politics is still partly framed by Cold War rivalry.

Park’s mostly liberal opponents gathered for rallies every weekend for months, while her conservative supporters also held demonstrations nearby.

While no serious clashes between the two sides have erupted, three Park supporters died after angry clashes with police outside the court on Friday. Two were believed to have suffered heart attacks and the third died in an accident.

Dozens of Park’s supporters milled about on the street outside her home on Monday, most carrying pictures of her or national flags. Police patrolled the area.

Park spent the day at home, where some political supporters visited her. One visitor told media she was feeling under the weather.

The Democratic Party’s Choo said Park should be treated as a suspect and cooperate with any investigation.

“Prosecutors must find the truth and punish any crime through their swift and thorough investigation,” Choo said.

Prosecutors accused Park of colluding with a friend, Choi Soon-sil, to pressure big businesses into contributing to foundations set up to support her policy and allowing her to exert influence on state affairs.

Park and Choi both denied wrongdoing and Park declined to answer prosecutors’ questions.

Park, 65, is South Korea’s first democratically elected leader to be forced from office.

Her dismissal followed months of political paralysis and turmoil over the scandal that also landed the head of the Samsung conglomerate in jail and facing trial.

The crisis has coincided with rising tension with North Korea and anger from China over the deployment in South Korea of a US missile-defence system.

Parliament set up a team of special prosecutors to investigate the scandal but its mandate has expired and the case has been handed over to regular state prosecutors.

The Seoul Central District Prosecutors’ Office was not available for comment but media said prosecutors were considering summoning Park as early as this week.

Property transactions down 9% in February