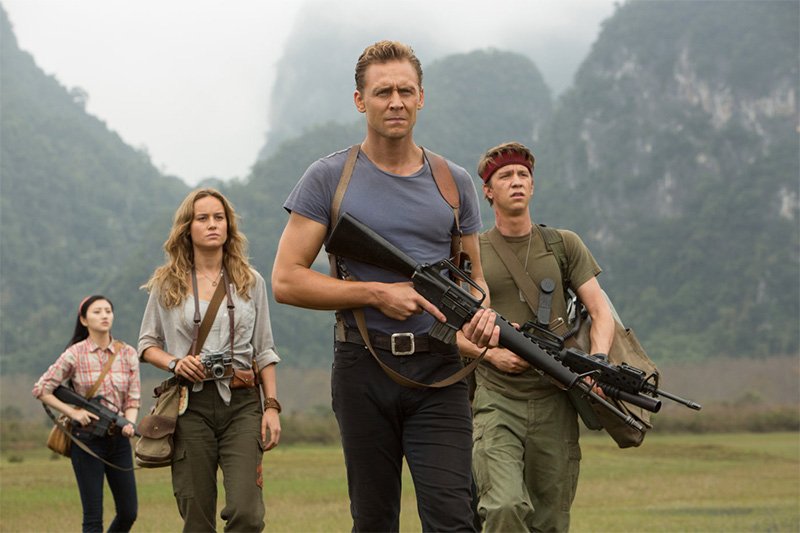 Is Kong: Skull Island any good? Well, let’s say it’s exactly how you think it’ll be, just a little bit better. You keep waiting for it to collapse under the weight of its accumulated bombast and it never does, which is an achievement in itself these days. That’s the way it goes with most would-be blockbusters, which manage to be both weighed-down and weightless; they keep adding fireworks and gewgaws and special effects, each scene trying to outdo the one before, and the process is self-defeating, the end result curiously unmemorable. They’re at war with themselves.

Kong does this too, over-egging the pudding. There’s a character death near the end which, based on the opening 20 minutes, you’d expect to be fairly devastating – but in fact it barely registers (indeed, it’s played as a joke), because so much else has been piled on top since the opening 20 minutes. King Kong’s first appearance sparks enough destruction of men and equipment to fuel a dozen action climaxes, yet in fact we’re barely halfway through the movie. The big ape roars, brushing off soldiers, grabbing one army chopper and slamming it into another – then towers up against the Skull Island sky, flecked with helicopters and backed by a ripe-orange sun, as one soldier squints uncertainly and asks: “Is that … a monkey?”.

Actually that’s his second appearance, the first being a short prologue set in 1944: two pilots, an American and a Japanese, are shot down, parachuting down to Skull Island where they immediately resume hostilities – at least till a huge black paw rises from behind the lip of a cliff, stunning them both into uneasy brotherhood. Fast-forward to 1973, the tail-end of the Vietnam war, and an expedition being dispatched to the island led by scientist John Goodman, tracker Tom Hiddleston, “anti-war photographer” Brie Larson and military psycho Samuel L. Jackson, an officer who takes ‘no man left behind’ to ridiculous extremes. You might think that’s too many characters, and you’d be right; there’s no real protagonist – to be fair, that’s been true of all King Kongs – and indeed Kong himself often fades into the background, the real monsters being giant lizard things with scaly bodies and empty eye sockets.

Let’s recap, shall we? A scientist, a tracker, a photographer, a military officer; a helicopter battle; a giant ape as well as giant lizards, setting up an obvious monster showdown like the one between Godzilla and the MUTOs (Massive Unidentified Terrestrial Organisms) in the recent Godzilla. Yes indeed – and we haven’t even mentioned all the other giant beasts on the island, or a bushy John C. Reilly as the aforementioned pilot who’s been living since 1944 with a tribe of painted, inscrutable natives (“They never smile!”). It’s all too much – and you wait, inevitably, for the film to collapse, yet it doesn’t somehow.

Nothing is first-rate here, yet everything’s a little bit better than it has to be. The script, co-written by the estimable Dan Gilroy (who did Nightcrawler), goes in for goofy dialogue and unexpected minor characters like the soldier who calmly sits down to dinner after the battle with Kong, opining to his comrades that “Eating’s for the living”. The director, Jordan Vogt-Roberts, channels Apocalypse Now and even Dr. Strangelove (‘We’ll Meet Again’), while the gaudy colours, 70s songs on the soundtrack and design details like captions in retro ‘Oriental’ font give the lead-in a much-needed zip. The stunts are impressive, especially the ones involving helicopters (most of it is done with computers, of course), and whoever designed the final monster battle came up with some neat choreography; it feels like two men fighting, which is rare for this kind of thing. There’s a yucky spider, a bird with a beak like a saw, and another that expires in a splash of blue blood. And of course the actors are also slightly better than expected: Reilly steals the show, but they’re all in high spirits and nobody phones it in – except perhaps the token Chinese actress with distractingly bad English, stuck in a nothing role for the sake of the Chinese market.

Kong: Skull Island is high in the annals of films with no good reason to exist; for one thing, it’s barely been a decade since Peter Jackson’s three-hour version of the story, turning the big ape into a romantic hero who gazed at sunsets and went ice-skating with Naomi Watts. The ape is more regal here (hence ‘King’) but equally virtuous, keeping the lizard things quiet and curbing Man’s lust for war and propensity for killing like he did in that prologue – and the film, it must be said, works better than Jackson’s, though it’s still overlong and overstuffed. You wait for the moment when you’re going to start hating it, but something always happens to postpone that moment. In the circumstances, that’s a kind of triumph.

Celebrating 40 years of gallery and its owner