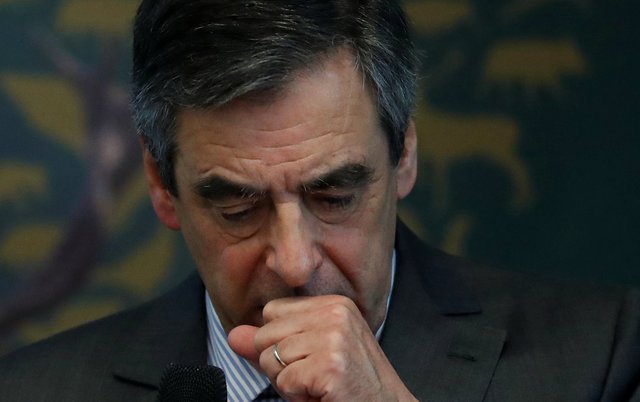 French presidential candidate Francois Fillon was put under formal investigation by magistrates on Tuesday on suspicion of embezzling state funds – a move that may ruin the right-winger’s hopes of winning power in May.

Fillon‘s campaign has been dogged by allegations he lavishly paid his British wife Penelope and two of his children hundreds of thousands of euros of public money for assistance, but he has refused to pull out of the presidential race.

The former prime minister had been due to meet investigators on Wednesday but, in a surprise move, the meeting was brought forward by 24 hours – apparently to spare Fillon the full glare of the media.

The 63-year-old conservative candidate was put under formal investigation on suspicion of diverting public funds, complicity in misappropriating funds, receiving the funds and not declaring assets fully, a judicial source said.

Fillon‘s lawyer could not immediately be reached for comment and there was no immediate comment from the candidate himself.

Once a frontrunner seen as a shoo-in for the presidency, Fillon has seen his ratings tumble under the impact of the scandal, known as Penelope-gate after his wife’s name.

Polls regularly show him likely to come third in a first round of voting on April 23 which means he will not make the May 7 runoff vote.

Under French law, being put under formal investigation means there is “serious or consistent evidence” that points to probable involvement of a suspect in a crime.

It is a step towards a trial, but many investigations have been dropped without going to court.

The announcement coincided with media revelations that his children transferred back to him large amounts of money he paid them, and news of a parallel inquiry by the ethics ombudsman of parliament into a €13,000 gift of two suits Fillon accepted in February, after the initial scandal erupted.

Speaking shortly before news that Fillon was the subject of a full-fledged judicial probe, a senior politician in Fillon‘s inner circle, speaking on condition of anonymity, told Reuters:

“We’re cooked. There’s not a day goes by without more news. The suits saga is a disaster. It’s something people can relate to. And now there’s this story about reimbursements by the children.”

Up to now, the scandal has focused on payments to Fillon‘s wife and children. But the gift of suits, which he has confirmed, as well as the elements concerning money transfers betweenFillon family members, confirmed by lawyers for the family, add a new dimension.

The clothing gifts from a for-now anonymous donor included two suits in February that were tailor-made at a chic Paris outfitter’s, for a total of €13,000. The suits were given after the ‘Penelopegate’ scandal erupted in January.

Le Parisien newspaper reported that investigators were now also looking at payments to his daughter Marie and son Charles for assistance work, and money which they in turn sent back to an account he jointly holds with his wife.

Fillon says he has done nothing illegal and has vowed to stay in the race for the presidency despite what he calls an attempted “political assassination.”

The opinion polls point to a run-off between far-right leader Marine Le Pen and independent centrist Emmanuel Macron, with the latter winning that duel convincingly.

Fillon‘s problems primarily concern close to one million euros, most of which was paid to his wife from parliamentary funds, and several tens of thousands paid to Marie and Charles.

Le Parisien said Marie Fillon transferred 70 per cent of some €46,000 she got back to her parents’ joint bank account, a figure confirmed by her lawyer Kiril Bougartchev.

The newspaper said Charles Fillon similarly transferred back to his parents about 30 per cent of the monthly wage of €4,846 he was paid by his father. Francois Fillon‘s lawyer told Le Parisien there was nothing unusual about the transfer.

While Fillon has accused the judiciary of bias and said he has done nothing illegal – members of parliament are allowed to hire family as assistants – he has acknowledged an error of judgement over the employment of family members.

National plan aims to cut cancer type by 40 per cent