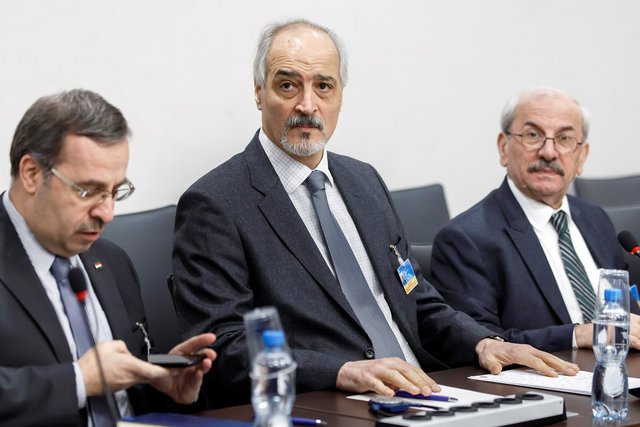 Bashar al-Jaafari attends prior a round of negotiation with UN Special Envoy of the Secretary-General for Syria Staffan de Mistura, during the Intra Syria talks, at the European headquarters of the United Nations in Geneva

Russian-led peace talks on Syria were derailed on Tuesday as rebels backed by Turkey boycotted a third round of meetings in Kazakhstan and the Kremlin indicated there were international divisions over the process.

Russia, Syrian President Bashar al-Assad’s most powerful ally, said the rebels’ reasons for staying away were unconvincing and their decision came as a surprise. Describing the rebels as Turkish proxies, the Syrian government envoy said Ankara had broken “its commitments” to the Astana process.

The rebels said on Tuesday they would not attend the talks, scheduled for Tuesday and Wednesday, because of what they called Russia’s unwillingness to end air strikes on rebel-held areas and its failure to get the Syrian army and Iranian-backed militia to abide by a ceasefire.

Russia has sought to revive diplomacy over Syria since its air force helped government forces defeat rebel groups in eastern Aleppo in December, Assad’s biggest victory of the war.

The cooperation of Turkey, one of the main backers of rebel groups fighting in northern Syria, has been crucial to the Russian diplomatic effort, helping to broker a ceasefire in December after the rebels’ Aleppo defeat.

Two previous rounds of Astana talks have sought to consolidate that ceasefire, reflecting an improvement in Russian-Turkish ties that had been strained to breaking point by the Syrian war.

Russian Foreign Minister Sergei Lavrov said the Russian Defence Ministry was in touch with Syrian rebel leaders who boycotted the talks, the Interfax news agency reported. He said Russia was dealing with the situation.

The Kremlin spokesman described the talks as hugely complex. “Sometimes the situation at these talks is really complicated because of substantial differences in approaches of various countries,” Dmitry Peskov said during a conference call.

Russian President Vladimir Putin had credited the Kazakhstan talks, which focus on reducing the fighting, with jump-starting UN-led peace talks in Geneva seeking a political settlement to the six-year conflict.

The Geneva talks broke off without any progress as seemingly unbridgeable divisions persist, chiefly over the future of Assad who seems militarily unassailable in the areas of western Syria under government control.

The previous Astana talks had been attended by rebel groups fighting under the Free Syrian Army banner. A spokesman for the rebels on Monday accused Russia of “continuing its crimes” against civilians in Syria – a reference to Russian air strikes – and of supporting “the crimes of the Syrian regime”.

The spokesman for the High Negotiations Committee, which groups armed and political opponents of Assad, suggested the rebels could yet go to Astana, though the decision was so far not to. “They are waiting to hear a response from Russia, but until this moment nothing came,” Salem al-Muslat told the al-Hadath news channel in an interview.

The rebels say Russia has failed to live up to its commitments as a guarantor of the ceasefire, saying government and allied forces continue to press attacks on remaining rebel-held areas in western Syria.

The Syrian government envoy to the talks said his delegation was in Astana to meet Syria’s Russian and Iranian allies, not the rebel factions.

“When one of the three guarantors breaks their commitment – and I mean Turkey – this means that Turkey must be the one that is asked about the non-attendance or participation of these armed groups,” Bashar al Ja’afari, the envoy, said in broadcast remarks from Astana.

Last week, Turkish President Tayyip Erdogan was in Moscow seeking to build cooperation with Putin over military operations in Syria.

Turkey is attempting to create a border “safe zone” in northern Syria free of Islamic State and the Kurdish YPG militia. The Russian-backed Syrian army has advanced to the frontier of YPG-held areas, but is not fighting the Kurds.

Blockaded Gaza looks wryly on as world isolates itself