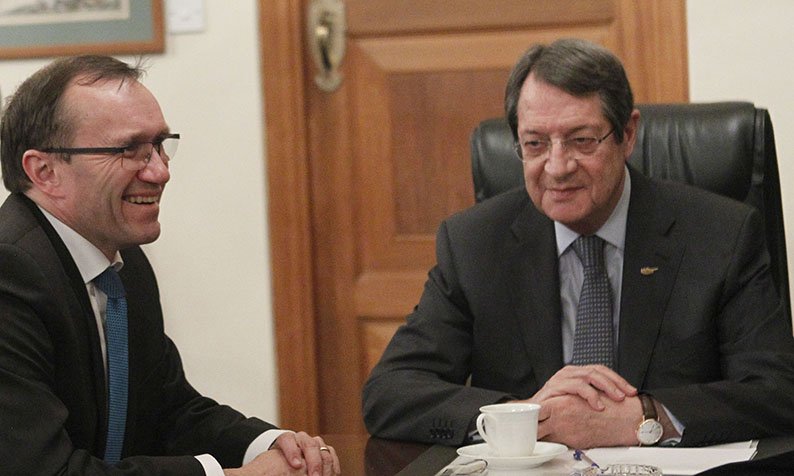 There is still work to be done before the two leaders can return to the negotiating table, but ongoing efforts to achieve this are promising, UN envoy Espen Barth Eide said on Wednesday.

After a meeting with President Nicos Anastasiades late in the evening, Eide said that, although the impasse in the talks is not over yet, both leaders “very clearly confirmed we are looking for a way to overcome this”.

“There is still work to be done but I don’t think it will take much time before the two leaders are back at the table,” he said.

“However, I don’t have an exact date.”

Reflecting on the week after Geneva, “before this impasse happened”, Eide said, the two leaders realised their talks were “not particularly effective”, and both have ideas on how to improve on the methodology of the talks once they return to the table.

“We have to talk about how we use our time more effectively,” he said.

“The week after Geneva was not bad, we did have progress, we did look forward and not backward, but not with the necessary speed. First we will come back [to the table], and when we are back, we will discuss together how we will do it from there.”

Asked what Eide meant when he referred to “ideas” about methodology, deputy government spokesman Victoras Papadopoulos said “we will have to see what Mr Akinci means”.

“What is clear is that the President has presented his proposal, on the triptych where convergences, minor divergences, and great divergences, will be recorded, so that we can, through this methodology and by adhering to the agenda of each meeting, solve the problems,” he said.

Earlier, after meeting with Turkish Cypriot leader Mustafa Akinci in the north, Eide said he had “no news to share” but was confident the current impasse in the talks will be overcome because “there’s a will to overcome it”.

Eide denied reports in Greek Cypriot media that the UN might seek a more assertive role in the talks, offering bridging proposals or even arbitrating, saying there is “absolutely no such intention”.

“We’ve tried that before, we’ve recognised that it did not work, and I came in here saying that even if I was asked by the leaders to arbitrate, I wouldn’t do it,” Eide said.

“And there’s no problem because I’m not being asked to arbitrate.”

Still, he added, both leaders know that the “famous window of opportunity” remains open, though it will not remain open forever.

“Tomorrow we will have a full month without meetings, which is the longest break until now over these 22 months [of talks],” he said.

Eide confirmed press reports that Anastasiades asked UN Secretary-General Antonio Guterres for an audience during his visit to New York later this month for a conference on investment in Cyprus, and hinted that it might be granted, but denied Akinci might be asked to attend.

“As I know [Guterres], he is easily accessible, but we’re not planning a joint meeting.”

Meanwhile, Anastasiades had earlier on Wednesday called on Turkey and the Turkish Cypriots to drop their rhetoric and focus on finding a solution that would yield a functional, modern state.

Speaking to reporters on the sidelines of a meeting with the leadership of a labour union, Anastasiades repeated his readiness to immediately resume the talks, stalled last month after a fallout over a parliamentary decision to commemorate the 1950 Enosis (union with Greece) referendum in public schools.

Turkish Foreign Minister Ahmet Cavusoglu said on Tuesday that “while the negotiations were continuing, the Greek Cypriot side took the decision of Enosis, which is to unify with Greece.”

“I want to say one thing: let us abandon the rhetoric and the excuses and concentrate in a positive manner on how a bizonal, bicommunal federation with political equality can yield a functional, modern state,” he said.

Anastasiades stressed that an “unfortunate regulation adopted by parliament” did not mean the president’s policy or that of the parties would change.

He said that the day after the vote, the national council unanimously decided that “we are neither fighting for Enosis, nor of course for partition”.

“If a regulation, and I’m responding to Mr Cavusoglu, about a brief reference, can be considered a change in policy, then what can one say about the July 20 celebrations, (and) August 15, when the invasion took place and violently imposed division, the state’s partition, and occupation of part of our country,” Anastasiades said.

“I was not the one who walked out of the talks and let us stop excusing behaviour caused by other reasons and not our own stance and conduct.”