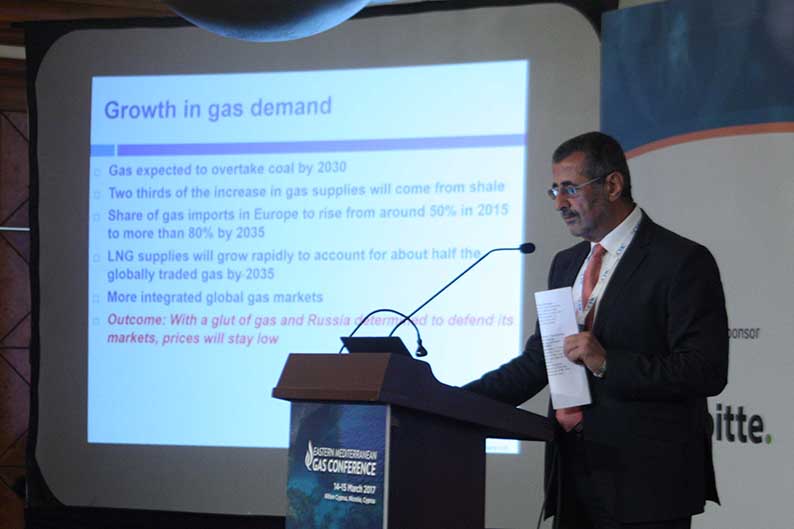 Cypriots would be better served to manage their expectations of a gas bonanza, an energy analyst told the fourth Eastern Mediterranean Gas Conference on Wednesday.

Addressing the conference, Ellinas broke down why development and monetisation of Cypriot offshore gas reserves is problematic at this juncture.

The current glut of resources globally – expected to persist for some years – is keeping oil and natural gas suppressed, presenting a challenge to new investment projects.

He cited BP’s Energy Outlook to 2035, according to which the technically recoverable oil resources in this period are 2.6 trillion barrels of oil.

Ultimately, stressed Ellinas, companies are in it for the profit.

In 2016, Russian and Azeri gas in Europe averaged at $5 per million British Thermal Units (mmbtu).

“So the East Med has to compete but also beat these prices,” he said.

But in order for East Med gas to be developed, prices in Europe would have to be at $8 per mmbtu.

That aside, other developments are making it even harder for East Med gas to secure markets.

The analyst was referring to this week’s deal between the European Union and Gazprom, where the former removed constraints on the Russian energy giant.

“Europe has now abandoned its energy diversification policy…because it has achieved its target [of energy security],” Ellinas noted.

Moreover, with the gas glut Russia is determined to defend its markets and keep prices low.

But there is a silver lining: if Total is successful this year with their drilling offshore Cyprus, then FLNG (floating liquefied natural gas) “may become a serious option for gas exports to Europe and the Asian markets,” said Ellinas.

For her part, gas consultant Gina Cohen presented a cogent analysis of why – despite significant gas finds in the region – countries have for the most part kept their gas in the ground.

Whereas Cyprus and Israel must necessarily export their natural gas – as their domestic markets are too small – export deals with neighbours Turkey and Egypt are proving elusive.

On the back of the massive Zohr discovery, as well as other projects, Egypt claims it will soon reach energy self-sufficiency, obviating the need for imports.

Cohen added, however, that the Egyptian claims should be taken with a pinch of salt, for two chief reasons: first, demand for energy in Egypt is projected to steadily rise and, secondly, some of the wells drilled are being depleted.

Meantime, for the first phase of development of its Leviathan reservoir, Israel has signed an agreement to sell some 3 billion cubic metres to Jordan – but the deal has yet to be ratified by the Jordanians.

For phase 2 of Leviathan’s development – regional exports – Cohen said Israel would need to choose between Turkey and one other regional country, but could not do both.

A pipeline from Leviathan to Turkish shores would have to cut through Cyprus’ exclusive economic zone; and though under international maritime law Cyprus cannot stop the project, Israel would have to be weigh whether a gas deal with Turkey takes precedence over its relations with the Republic.

Collaboration could be achieved among the three countries if Cyprus were to agree – a difficult proposition politically – to piggyback onto an Israel-Turkey pipeline.

Cohen was likewise sceptical on the proposed EastMed gas pipeline, linking Cyprus to Crete and then Greece or Italy. The pipeline would also transport Israeli gas to Europe, via Cyprus.

She said estimates cited during the conference – placing the cost of the pipeline at €5.7bn – were likely too low.

“So when our minister [Israeli energy minister Yuval Steinitz] meets with the Cypriot minister and the Greek minister to discuss the East Med pipeline, I think they’re doing it for the photo-op,” Cohen said, drawing chuckles from the audience.