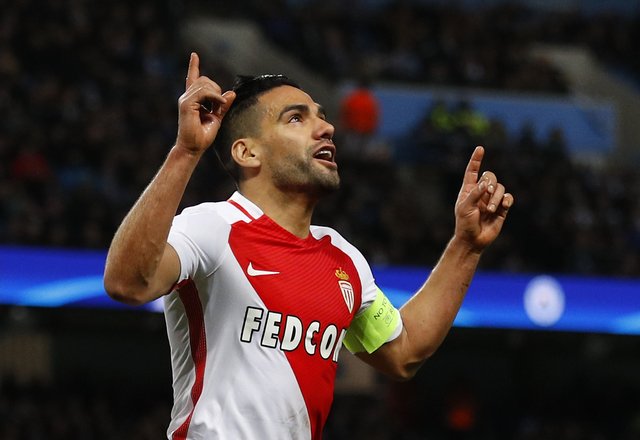 Radamel Falcao, who scored twice and missed a penalty in the first leg, is desperate to overturn Man City's 5-3 advantage

Monaco owe most of their recent success to their young guns, but when they face Manchester City looking to overturn a two-goal deficit in their Champions League last-16 tie on Wednesday, they will turn to a more experienced player in Radamel Falcao.

The Colombia striker, who endured two dismal injury-plagued seasons in the Premier League, has been near his best since he returned this season from a season-long loan at Chelsea.

“This season, I’ve been playing consistently. The club has full confidence in me, the staff and my team mates make me feel important,” said Falcao, who scored two but missed a potentially decisive penalty in Monaco’s 5-3 defeat in the first leg in Manchester.

“With confidence, the rest comes naturally. I don’t think players forget how to play football. I just needed playing time and continuity. You don’t forget how to score goals,” Falcao added.

Monaco, who geared up for the game with a 2-1 victory over Girondins de Bordeaux on Saturday, will need to show more focus if they are to go through.

“We need to raise our level of concentration to make up for our lack of experience in this competition.”

Falcao, who has recovered from a hip injury, is expected to start in a 4-4-2 formation alongside prodigy Kylian Mbappe with Bernardo Silva, another young gem in the squad, expected to provide them with scoring opportunities.

Monaco’s only concern is the absence of centre-back Kamil Glick, who will be replaced by Jemerson.

City, who warmed up with a 2-0 FA Cup win at Middlesbrough, have vowed to take the same offensive approach at the Louis II Stadium.

“This is the way we’ve been playing until now and I think it would be a big mistake if we went to Monaco to defend.

However, defensive improvement is needed.

“We have to attack in the same way that we did here at the Etihad and if we do we’ll create chances and score goals,” goalkeeper Willy Caballero said.

“But the most important thing is to defend better than we did in the first leg.”