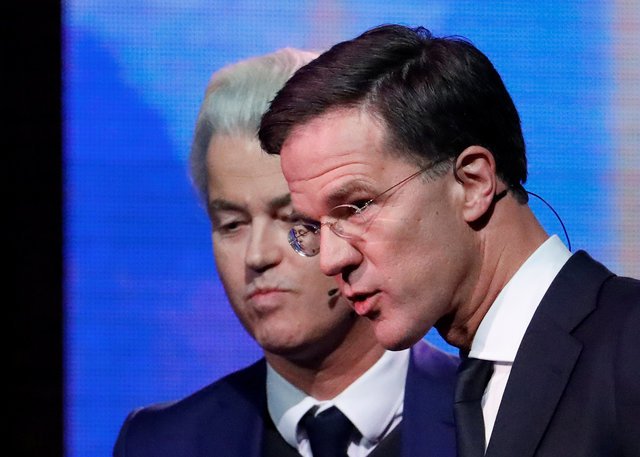 WHERE is Europe heading? It seems increasingly like a rudderless ship on stormy seas.
As if Brexit was not enough, now there is post-Trump extreme populism, fanning the flames of Islamophobia. Holland, on the eve of an election has banned two

Turkish ministers from entering the country to speak to pro-Erdogan voters.
The Dutch law may not allow foreign leaders from campaigning, but equally Dutch criminal law prohibits racial and religious hatred. Now, even Dutch-born Turks are not safe from Geert Wilders’ anti-Islamic extremism.

In the last two years, there have been a noticeable increase in Dutch neo-Nazi skinhead attacks on Turkish communities. So, when Recep Tayyip Erdogan talks of “remnants of Nazism” is he totally wrong?

Sadly, both Wilders and Erdogan share one major characteristic: They are opportunistic, using Islam for political ends, violating secularism of the political arena. Wilders, until recently the front-runner, is now on a declining trend going into the election today. Erdogan too, has his own tight race in the upcoming presidential referendum on April 16. Both see political gains from brinkmanship.

Thank God, France came to the rescue and allowed the Turkish foreign minister to speak at a rally in Metz. That at least has prevented accusation that all Europe is anti-Muslim. But more damage control is urgently required.

Surely in Social Europe, an ideal to which all fair-minded persons subscribe, there must be social justice for all, Turkish Europeans included? Civic and citizenship rights for all mean basic freedoms, including the right to free speech and assembly, within the law. If Turkish communities in Europe, holding dual citizenship wish to vote in the referendum in Turkey, some legal way should be feasible to enable them to use their democratic rights.

Cooperation, not confrontation, should be the way to deal with Dutch-Turkey relations. For too long, Wilders has campaigned on “Get rid of Muslims” slogan.  Turks, and other Muslims have driven to riot by Islamic hate. Many have succumbed to radicalisation. Erdogan is now championing their cause.

Unfortunately, his image in the West is no help. He is one angry man who strongly believes in two things. First, Europe failed to support him in the failed July 2016 coup. Second, he thinks, equally strongly and not without some justification, that European leaders are practicing double-standards when it comes to relations with Ankara. For decades, EU leaders have conveniently hidden Greeks and Greek Cypriots to keep Turkey out.

Wiser and cooler heads should prevail. If only in the name of Social Europe, European leaders need to be more like the French and less like the bigoted anti-Islam leaders, now in power in Hungary, Austria and, sadly now, in Holland. The road these politicians appear to have chosen is backwards toward the Middle Ages. A new age of Crusades must be avoided.

Where do we go from here? Go back to the drawing board and redefine Social Europe. It should be social justice for all, especially workers, and inclusive.

Multilateralism must be adopted, maybe learning from Canada. Specifically, Social Europe must embrace European Turks and other Muslims, as they are.

Assimilation, making immigrants become Christian “like us” is racism. It is recipe for disaster.

None of the above is a defence of Erdogan. He must feel vulnerable at home, where latest polls suggest a neck-and-neck vote. Always an opportunistic politician, he is now turning to Europe, picking an easy fight with extreme populist leaders.

The best strategy is avoiding the Muslim card: show tolerance and offer an olive branch to European Muslims. Human dignity can neither be selective nor limited by race, religion, gender or ethnicity. Social Europe must belong to all workers and citizens. Equal citizenship rights and equality under the rule of law are what make countries great.

Turkey and EU have more interests in common than in conflict. The Custom Union is working, but needs updating and, despite all its faults, the Refugee Agreement is sufficiently effective to enable orderly management of economic migrants and asylum seekers.

Likewise, cooperation between EU and Ankara are essential in fighting international terrorism and ending the conflicts in Syria and Iraq. Yes, accession talks are currently in deep freeze. In the immediate poisoned atmosphere that is just as well. But, in the longer term, when the existing abnormal conditions, in particular states of emergency are over, and some kind of regional stability is restored, normality will return. With that in mind, it is advisable that wiser politicians in Brussels, Paris and other capitals should step to the plate, urgently in defence of values for an inclusive Social Europe.

Fossils from 1.6 billion years ago may be oldest-known plants

The mid-spectrum parties and alliances of convenience