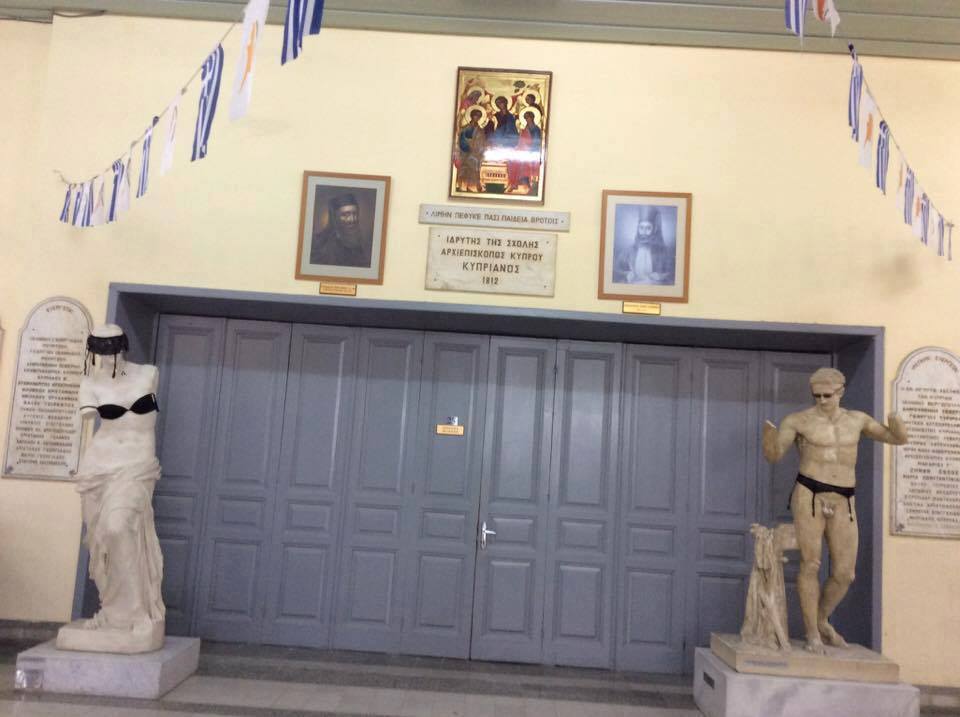 The art project was inspired by a Gucci fashion campaign

The historic Pancyprian Gymnasium defended a school art project on Wednesday which had replicas of ancient Greek statues on the school grounds dressed up in sexy underwear.

The bra and suspender-clad statues have been criticised on social media and outraged the head of Oelmek secondary education teachers’ union, Demetris Taliadoros.

The issue emerged on Tuesday after photos of a male statue wearing suspenders and of a female statue in a bra, circulated on social media.

Taliadoros had posted the photos on his Facebook profile with a comment underneath that “a bit of respect to the history and art of the Greek civilisation and [to] Archbishop Kyprianos wouldn’t hurt”.

The Pancyprian Gymnasium was founded in 1812 by Archbishop Kyprianos. It was originally called the Hellenic School and is the oldest high school still in operation on the island.

Another Facebook user called on the school to expel the students who “did this act of vandalism”, adding that it was “petty and vulgar”.

“This is a strong message to the state that continuously removes Hellenic-centric elements from our educational system out of fear that some would react to ‘nationalist policies’,” he said.

The school said in an announcement on Wednesday that dressing the statues in underwear was part of the annual islandwide school fine arts competition which this year had the theme of “Connecting continents, bridging cultures”.

According to the school, the art project in question was inspired by the Gucci fashion house’s request to the Greek authorities last month for permission to organise a runway show in front of the Parthenon in Athens. Greece said no.

Last year, Gucci had also uploaded on its official social media accounts videos of the Parthenon sculptures wearing its creations, to promote its new line.

“The aim was to highlight exactly through the reactions whether works of art, and especially sculpture, could be used as a means of promoting, even advertising market objects,” the school said.

The move, the school said, “could be described by some as bold, but it was solely aimed at recording any positive or negative reactions of the spectator over any alteration of the overall image of the statue or bust”.

Choosing the two statues, the school said, was made not out of lack of respect but because as museum exhibits, they were deemed suitable for such an artistic intervention, not only for artistic purposes but to also encourage critical thinking on behalf of the students.

“But we do not think that through the above idea, the appreciation and the honour due to the depicted faces was diminished in the consciousness of anyone. On the contrary, through the reactions, it emerged that what is sacred in our consciousness over time, […] remains there as a national heritage,” the school said.

The school said that it has proven through its history that it keeps at bay any intention to challenge “the principles and values of our race”. 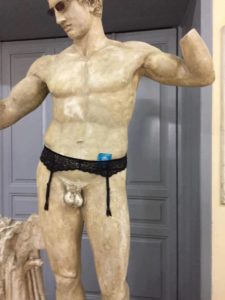 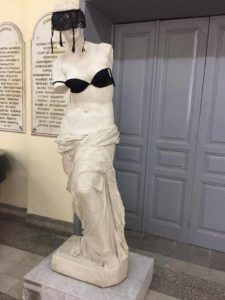 Photographer sorry for sign that caused offence in Jewish community