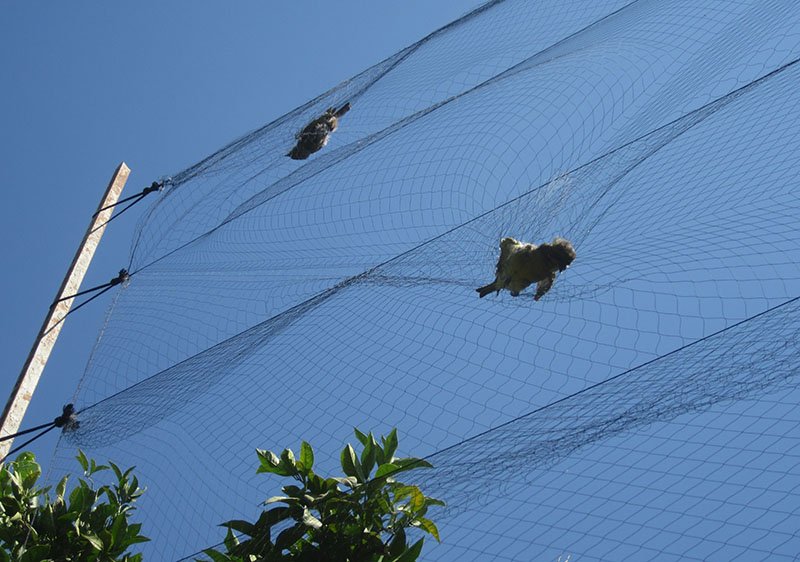 Approximately 2.3 million birds have been killed in Cyprus in autumn 2016 alone, a new study by BirdLife Cyprus found.

From August to October more than 850 mist nets were confiscated, the highest number in the past six years, and more than 3,500 limesticks were seized by enforcement agencies.

The latest findings of the BirdLife Cyprus surveillance programme, released Thursday, show that 21 kilometres of mist nets were active during autumn 2016 within the survey area, which covered the Larnaca to Famagusta and the Ayios Theodoros to Maroni areas, both traditional areas for poaching.

“Illegal bird trapping is a serious and persistent problem both in the Republic of Cyprus and the SBAs [British bases],” BirdLife said in their report, calling on the government and the British bases to take urgent action.

“In the Republic, the use of limesticks is widespread and there are restaurants illegally offering ambelopoulia, while in the SBAs there is extensive mist netting activity and widespread use of calling devices to draw in birds to their death.”

The figures make it very clear that joint action is necessary to address this persistent issue, the report says. As in the Dhekelia SBA area mist netting remained at record levels last autumn, the Bases need to do more to tackle the problem.

The bases said they have stepped up enforcement, managing to halt the rising trend.

“The UK is committed to tackling illegal bird trapping and are pleased that the RSPB has recognized the significant increase in enforcement activity which has led to a record number of arrests, equipment seizures, prosecutions and fines.

“For the second year running we have halted the rising trend in numbers of birds killed and continue to work with RSPB and BirdLife Cyprus to implement a long-term strategy to significantly reduce this number of the coming years,” a British bases spokesman said.

BirdLife Cyprus also criticised the government for a lack of political will, as a strategic plan for the selective hunting of blackcaps from 2015 needs to be implemented and there are a number of loopholes in the existing legislative framework. As well, serious action against restaurants illegally serving the birds need to be taken, the group said.

“As well as the urgent need to deal with the restaurants which illegally serve ambelopoulia in the Republic of Cyprus, it is necessary to address the supply coming from the SBAs,” Jonathan Hall, Head of UK Overseas Territories Unit of the RSPB (Royal Society for the Protection of Birds) commented. “The RSPB, as the largest nature conservation organisation in the UK, is calling on the UK government to crack down on this activity and end the illegal killing of songbirds in Dhekelia. This is an issue about which British people care passionately, so we expect the UK government to take firm action”.

An efficient way to trap the birds is to use a net between acacia bushes, which are a rooting spot of the birds. Poachers play fake birdsong to attract the birds. Removing the acacia bushes, an invasive species, does much to stop the wildlife crime.

“A key measure to stopping industrial scale illegal bird trapping within the SBAs is the acacia clearance programme that the SBA Administration started in December 2014. Unfortunately, this was halted by large protests organised by the local pro-trapping community in October 2016,” BirdLife said.

The operation to remove the bushes was stopped last year when trucks were used to blockade the main road in and out of the base.

This is not the first time the poachers defended their illegal actions. They have repeatedly attacked activists and police who were trying to remove trappings over the years.

Selling ambelopoulia is a business worth some €16m million per year according to the Game Fund.