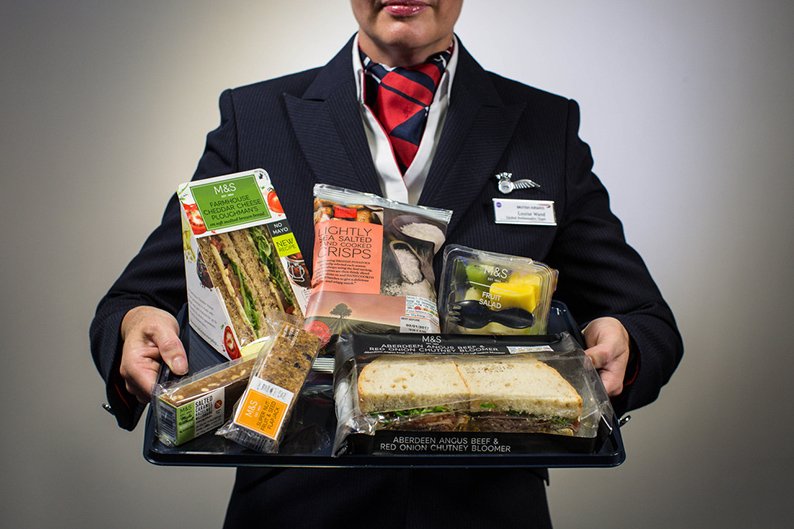 Does anyone know what British Airways (BA) are trying to achieve? Does BA know? Decades ago BA advertised themselves as the world’s favourite airline, but such self-worship does not stand up today.

BA are now part of the International Airlines Group (IAG), along with Aer Lingus, Iberia and a little-known Barcelona based low-cost Spanish airline called Vueling. According to the CEO of IAG (Willie Walsh – previously CEO of BA) the group carried just over 100 million passengers in 2016, but it is just BA itself I want to concentrate on, as they are the ones sending shock waves through the European community regarding so-called short-haul flights resulting from their policy of making passengers pay for food and drink from January 11 this year. As the food is supplied by Marks & Spencer (M&S) it means that food has to be loaded at Heathrow (LHR) for both the outgoing and incoming legs of the journey, with predictable problems.

BA worldwide passenger numbers have risen steadily since 2010 from 29.7 million to around 45 million per annum in 2016 (50 per cent), yet the new food and drink policy was partly introduced because easyJet and Ryanair “have been taking a growing share of the market”. Sadly, I cannot find numbers for the BA passengers just in Europe, but easyJet and Ryanair, both of whom only operate within Europe, carried 73 and 117 million respectively in 2016, up from 70 and 101 million in 2015. This puts BA’s worldwide efforts very much in the shade, never mind how it compares to their European market. Indeed, BA do not rank in the world’s top ten airlines, whereas both easyJet and Ryanair do.

So, how is this great new food and beverage sales scheme doing? Well, from what I have both read and personally experienced it can be safely said to have got off to a calamitous start, largely due to a combination of very poor planning and minimal staff training.

On day 1 a Swiss national on a flight from LHR to Zurich said only half the passengers got served and that “BA becomes the Fawlty Towers of the sky”. On day 2, Rachel Johnson (sister of Boris) was on a flight from Lyons and was seated in row 21. The trolley took an hour to reach her, by which time the food had run out. According to the air hostess “M&S had loaded only one bacon roll, two beef sarnies and three ploughman’s for both the flight out and the return”. Why was M&S responsible for the loading? BA is responsible, surely, for loading enough food for the passengers they know will be on both legs of the flights to and from Lyons ?

The UK’s Daily Mail reported that a BA spokesman stated: “We’ve had some small teething issues on a tiny number of flights. The introduction of M&S On Board is an incredibly complex change to our operations, so we’re pleased with how well the roll-out has gone” Really? Either, Mr. Spokesman, you are excessively stupid, or you think such patronising remarks are acceptable to explain away crass incompetence. Requiring passengers to pay for food and drink is one thing, but for passengers then not to be able to get food is totally unacceptable and unforgiveable.

My wife and I were on flight BA 662 from LHR to Larnaca on January 15. Both in anticipation of problems with BA serving food and beverage on a flight with some 200 tourist class passengers, combined with our refusal to pay BA any money anyway, we carried our own food and drink on board.

The machines with touch-screens used for the sale of goods failed to work, resulting in no food being sold at all for the entire flight. An air hostess, almost in tears with embarrassment and frustration, said that unless the machines could be made to work there would be no food served on the return journey either!

The first officer apologised for the situation and thanked the passengers for their understanding of a new and complex system which has a few teething problems! (“Teething problems” must be the new BA mantra for all personnel).

A steward with over thirty years’ experience told me that when he joined BA it was a privilege whereas now it is just a job until he can retire.

Finally, Dominic Lawson (a well-known newspaper correspondent and son of a former Chancellor of the Exchequer) was on a flight to Gibraltar on January 30 and sat in row 16. He reports that it took the crew some three hours to reach him, by which time they were beyond Madrid and close to descending in to Gibraltar. As he said, “BA flies the flag for shoddy service……so some of my fellow passengers would not even have been able to obtain a glass of water for which a payment is also required.” He returned to the UK by easyJet for £41.89 (including the premium for a front row seat and priority boarding) compared to BA’s £110.70. He suggests that when BA offers a worse performance than a budget airline for almost three times the price it amounts to a national embarrassment, since in the eyes of many foreign travellers BA still represents Britain.

These teething issues seem to be getting rather large and numerous, don’t they? But with appalling management, this is not surprising.

To add insult to injury, BA are going to reduce leg room on their Airbus A320 and A321 by inserting two more rows of seats. According to their spokesman “From next year we’re making a small increase to the number of seats on our A320 and A321 fleet so we can keep fares low. Customers fly us because we offer quality and value in all areas”.

A British newspaper reported that in early April BA would charge £260.65 for a return flight to Malaga, with just cabin baggage, a gin & tonic, a sandwich and a coffee. A similar flight with easyJet will be £224.58 and £188.58 with Ryanair.

Where is the “quality and value” in any of that, and is that what they call keeping the fares low?

So, I again ask: What are BA trying to achieve?

Shoddy service and high prices will more than likely drive customers away, especially as food and drink are extra, and given the increasing indifference being shown to customers BA deserve to lose passengers to other airlines by the plane load. Reports on money made by airlines with such schemes varies between US$2 and £2 per passenger. Assuming it is £2 and further very, very generously assuming that 50 per cent of BA’s passengers are tourist class within Europe, then BA can look forward to adding some £46 million to their revenues. As IAG have just reported a 2016 group pre-profit of £2 billion (apparently up almost one third on 2015) this little money earner would add over 2.0 per cent to their pre-tax profit in 2017.

The bottom line is, I guess, all about money, but BA are taking a very large risk indeed in trying to earn it. There is, however, mighty little that the passengers can do about it all, other than to seek alternative carriers. No doubt Mr Walsh believes he is earning his over £2.4 million salary package regardless of how the long-suffering BA passengers may feel. That’s a lot of M&S sarnies, Mr Walsh.