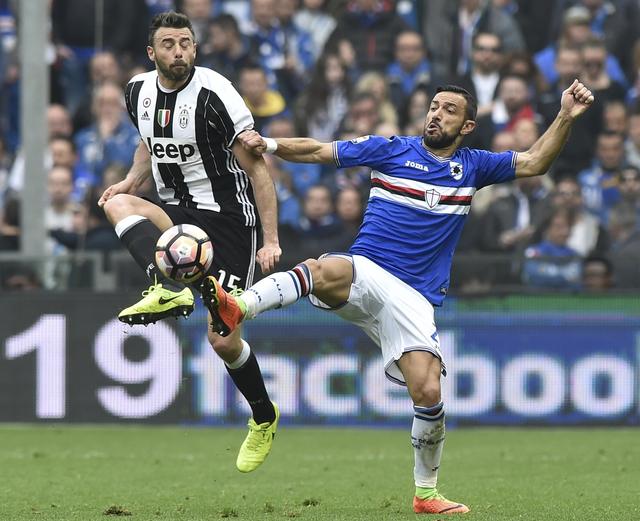 Juventus beat a spirited Sampdoria 1-0 after Juan Cuadrado’s early goal to provisionally extend their lead in Serie A and take a step closer to a sixth successive Scudetto, while Napoli kept alive their faint title hopes with a 3-2 win at Empoli.

Juventus moved up to 73 points with nine games to play when Cuadrado, making his 50th appearance for the reigning champions, met Kwadwo Asamoah’s excellent cross from the left in the seventh minute with a diving header to give Massimiliano Allegri’s relentless league leaders an early lead.

Sampdoria came out battling after the break, and came close to equalising when the outstanding Asamoah was forced to deny Patrik Schnick with an exceptional last-gasp interception, but Juve defended stoutly to see out the win.

Earlier, Napoli consolidated their grip on the Champions League places and moved 10 points behind Juve and provisionally above Roma into second on 63 points with an exhilarating win at Empoli.

Maurizio Sarri’s side blew away his former club during the first half and were 3-0 up after a double from Lorenzo Insigne and Dries Mertens’s free kick inside the opening 38 minutes, with the latter also having an early penalty saved.

Empoli set up a nervy finale when Omar El Kaddouri scored with a delightful free kick in the 70th minute and Massimo Maccarone struck from the penalty spot 12 minutes later, but Napoli clung on to move one point ahead of Roma before the capital side’s game against Sassuolo later on Sunday.

“We’re growing, but a team that plays a second half like this cannot have strong ambitions,” Sarri told journalists. “Until we resolve this problem, we cannot bridge the gap with the top teams.”

Alejandro Gomez’s double and a goal from Alberto Grassi saw Atalanta bounce back from last weekend’s 7-1 humbling at Inter Milan and beat Pescara 2-0 to move back up to sixth on 55 points.