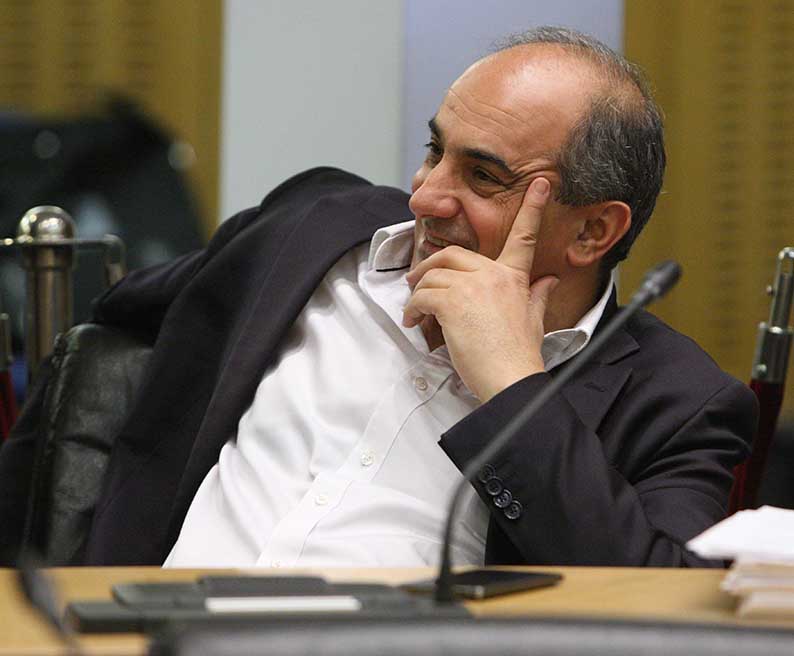 “SPYROS Kyprianou passed away without being able to see his dream of his country’s liberation become a reality. His commitment and practical contribution to the search for a solution renders him a source of inspiration and a symbol of faith in the great struggle for freedom and democracy… He also played a part in the elimination of corruption and the establishment of rule of law.”

These are some of the views expressed by the president of the House of Representatives Demetris Syllouris at the memorial service for former president Spyros Kyprianou on March 11. Spyros Kyprianou, an embarrassment that should have made us all ashamed that he served as our president for close to 11 years, has now become a “source of inspiration and symbol of faith” for Syllouris. Another hero of Syllouris’, Tassos Papadopoulos used to say that “foreigners laughed at him (Kyprianou) when they heard him talk.”

From 1983 until 2004 Syllouris was an active member of Disy. He served as a party deputy for 13 years and for a period was Disy general secretary. Disy was established in 1976 with the exclusive purpose of fighting against everything that Spyros Kyprianou stood for – irresponsible demagoguery, political stupidity and ruthless populism. From 1977, when Kyprianou became president, and for the next 11 years, Disy had one main objective: to have him removed from power. The party would slam his rejectionist stance, which wrecked every chance of reaching a compromise in the Cyprus problem and salvaging whatever was possible.

During those 11 years, Syllouris and the rest of us who were involved in this political fight would visit every corner of Cyprus in an intensive campaign to persuade voters that Kyprianou was a walking disaster, that he was a pig-headed madman who would, with clinical precision, lead Cyprus to permanent partition. We argued the line of Glafcos Clerides who in 1974 had warned that if the Cyprus problem was not settled soon, the passing of time would solidify the status quo and a settlement would become increasingly more difficult to achieve, an analysis that proved correct.

We are owed an explanation from Syllouris for his bizarre behaviour. How the hell did the man he considered a “scourge” of Cyprus when president and fought against with all his might, even in the last coffee shop of Cyprus, today become a “source of inspiration and a symbol of faith in the great struggle for freedom”? If he regrets his past political actions and does not believe Kyprianou was the man we accused him of being, he should say so.

If today he has changed his view and believes that Kyprianou, the man who accused Tassos of being “the brain behind the big conspiracy” of July 1978, who rejected the return of Famagusta in the same month, dismissing Denktash’s relevant offer as “a sham” and saw conspiracies and ghosts everywhere, was a national hero that today inspires, then Syllouris has an obligation to apologise publicly for his past actions.

He should also let us know whether he was being serious in saying that Kyprianou made a “practical contribution to the search for a settlement”. What contribution to what settlement? And which corruption was eliminated by Kyprianou, the patriarch of corruption who had Christodoulos Veniamin and Dinos Michaelides as his bishops? And what rule of law did he establish? The Diko-cracy of political terror, of relentless rusfeti and pay-outs for votes and of widespread intimidation tactics that gave Diko a 27.5 per cent share of the vote in 1985 – a bigger share than Akel? Tassos had said that Diko was the “first to teach corruption and rusfeti”. And Syllouris could not find anyone other than Kyprianou to inspire him, the man that causes laughter just to think of him.

This is the depressing level that our political elite are capable of sinking to. A miserable level, which – as I have written on many occasions – is not unrelated to our current woes and those awaiting us.

British Airways and the sarnies saga