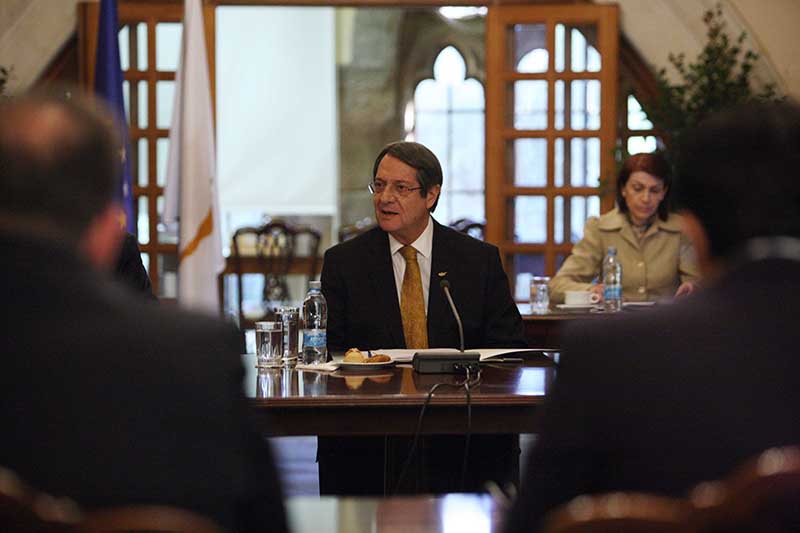 Anastasiades is heading to New York

President Anastasiades accompanied by three of his ministers will be flying to New York tonight to address the Invest in Cyprus Forum organised by Capital Link. The CEOs of the three Cypriot banks as well as top executives from energy, auditing, ship management and investment companies will also take part in panel discussions aimed at promoting the advantages and benefits of investing in Cyprus and the energy opportunities opening up.

There is no denying, however, that the impact of the Forum would have been much greater and would have attracted the interest of many more investors if there had been a Cyprus settlement. There would not only have been many more investment opportunities to promote but also a bigger choice and, most importantly, the guarantee of stability which is essential to investors. To be fair, we have had peace and stability for decades but the obvious fragility could only be removed by a settlement.

We heard about the big energy prospects of Cyprus at last week’s Eastern Mediterranean Gas Conference in Nicosia during which there was talk about the possibility of another Zohr prospect in the Cypriot EEZ. There would be drilling this year while the announcement of the development plan for the Aphrodite gas field was imminent; some companies that offer support services to oil companies have set up operations in Cyprus. But if there was a deal on Cyprus the level of business activity and investment would increase geometrically and the prospect of becoming a regional energy hub would not just be empty talk by politicians.

As things are the uncertainty remains. Nobody knows how Turkey’s unpredictable president would respond to any new drilling in the Cypriot EEZ. If relations with Turkey were normalised though Cyprus would not only be able to become the base for a host of energy companies but it would also have found a market for its gas or at least access to the most economically viable route to get it to the European market. At the gas conference there was also talk of setting up a floating liquefaction plant.

Nobody talks about the positive impact on economic growth of a settlement today. Some businessmen and representatives of chambers of commerce publicly spoke of the opportunities that would be opened, when talks began, but were faced with a barrage of criticism from rejectionists for putting money and business above principles and justice. No mention that the ‘no’ campaign in the 2004 referendum was funded by people whose business interests were served by the maintenance of the status quo which kept property prices in Paphos and Limassol artificially high.

The high ideals and principles put forward over the years by politicians and foreign ministry big-wigs, who have been dictating our side’s stand, have been a pretext for not agreeing a compromise. Their motives are not as pure and idealistic as they would have us believe. In fact they are more dishonest than the businessmen they disparage for supposedly lacking patriotism, because their opposition to settlement is fashioned by an unwillingness to share power with Turkish Cypriots as this would diminish their own advancement prospects – fewer ministries, fewer ambassadorial posts and, worst of all, the nightmare of rotating presidency.

For how much longer would this self-serving clique, which helped bankrupt the country with its poor understanding of economics and would rather make a big noise about violations of our EEZ by Turkey than reach an agreement that would allow us to exploit our hydrocarbon reserves in secure conditions, be left to call the shots? These are the same people that encouraged rejectionist newspapers to write scare stories about the ‘prohibitive’ cost of a settlement, because of the property compensation, while conveniently avoiding factoring in the huge investment and growth opportunities that would benefit the whole population.

Most Cypriots “are not even aware” how much money is ready to pour in if a deal were achieved, a foreign business leader, John Harkrider, was quoted as saying by Foreign Policy website. This is because our anti-settlement elite and its media organs dismiss anyone who dares talk about the growth potential and huge economic benefit a deal would bring, as being unpatriotic and money-oriented. Yet anyone with a basic understanding of economics knows that re-unification is the only way to unlock the potential of our stagnating economy and make it take off. With no deal we can look to modest annual growth rates of one or two per cent, fuelled by tourism – other things being equal – and the offer of citizenships – for as long as the EU turns a blind eye – in exchange for buying properties.

With a deal, however, there would be real foreign investment that would create jobs and wealth for the whole population. Just consider the boost that would be given to the economy by the re-building of Famagusta and the unhindered exploitation of hydrocarbon deposits. And most importantly, a rapidly growing economy, the prosperity of which is enjoyed by all the people, is the best guarantee of future peace and stability.

While Russians elsewhere in the EU are flooding home, in Cyprus they are staying put