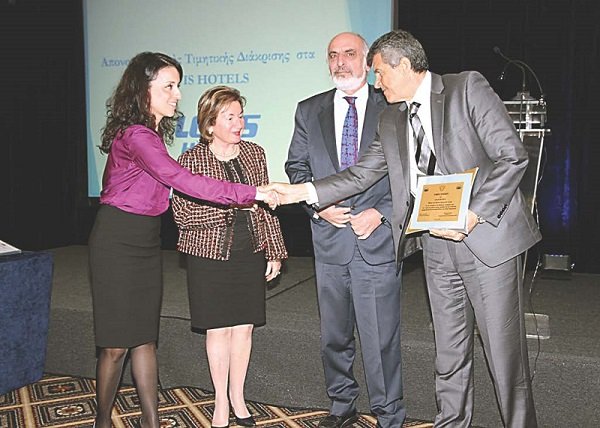 The annual quality event, organised by the Cyprus Certification Company (KEP) and the Cyprus Standardisation Organisation (CYS), was held at a Nicosia hotel on March 7, 2017.

Louis Hotels, a part of the Louis Group of Companies, with a long history and a traditionally leading role in the tourist industry of Cyprus, as well as Greece, received the Honorary Distinction in the context of the annual ‘Special Honorary Quality Distinctions’ awards by KEP and CYS.

Born from the Louis Tourist Agency in the early 1940s, Louis Hotels was started by the late Louis Loizou through the purchase of the legendary Semmering, as well as the Grand Hotel.

The Louis Hotel in Ledra street followed, while in 1969 Louis Loizou obtained the management of the iconic Ledra Palace in Nicosia.

This was the start to a long and glorious growth period in Cyprus and Greece, which peaked in December 2002, when a deal was made with Hilton International for the management of Hilton Park.

Managing 22 four- and five-star hotels, which include 12,000 beds, 2,500 employees, and an annual turnover of more than €100 million, Louis Hotels has committed itself to quality, as its hotels were among the first to receive management certification in Cyprus.

During the milestone year of 2001, Louis Hotels began cooperating with the KEP, certifying the Apollonia hotel for the first time, followed by Louis Phaethon, Imperial, and Nausicaa.

Implementation of these standards reaffirm Louis Hotels’ responsibility and credibility, as it combines with its years of experience in the tourism sector.

Restoration work completed on site of Jesus’s tomb in Jerusalem

Soaring reviews and high praise for the all new Nissan Juke

Visit the majestic Dubai with special fares from Emirates