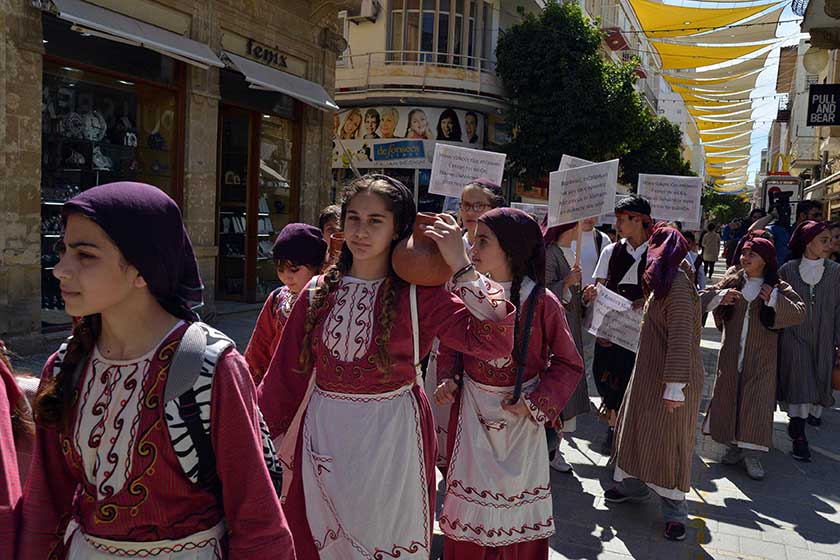 Children – dressed in traditional attire, holding clay jugs and placards with advice on how to save water written in the Greek Cypriot dialect – marched from the Ochi roundabout to the primary school of Phaneromeni in central Nicosia.

The event – co-organised by the Water Development Department, the Nicosia municipality, and the Cyprus Marine Environment Protection Association (Cymepa) – aimed at raising awareness among children on the waste of water.

Among the advice the placards had written on them was that a car can be washed with just a bucket of water and a sponge, while another said that hosing down verandas and yards was against the law.

According to the general secretary of Cymepa, Dr Michalis Ierides the children wore traditional Cypriot attire and carried clay jugs just to get an idea of what it was like in the old days – before houses had running water – to walk long distances to carry water home.

“To make them realise how hard this was. Unfortunately, children in African countries do this even today. They have to walk four to five kilometres to carry water home,” Ierides told the Cyprus Mail.

He added that the aim of the event was to raise awareness among children on how precious water is and introduce them to ways they – and their parents – can save it.

“We teach them to use the water they wash their vegetables with at home to water their gardens, or when they are brushing their teeth to only open the water tap when they want to rinse, etc,” Ierides said.

Children from schools that participate in Cymepa’s Eco-Schools programme, which numbers around 260 members, took part in the event which will also take place on Tuesday with children from other schools in the same programme.

World Water Day is a universal call about taking action to tackle the water crisis through reducing and increasing reuse.