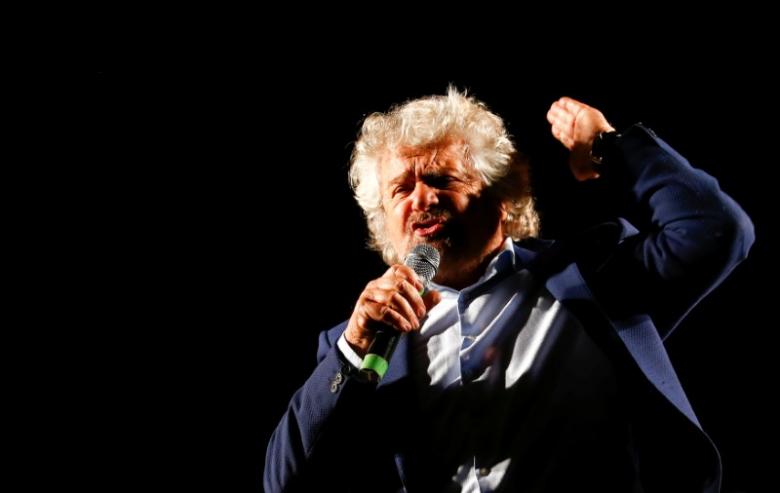 Beppe Grillo, the founder of the anti-establishment 5-Star Movement, talks during a march in support of the 'No' vote in the upcoming constitutional reform referendum in Rome

Italy’s anti-establishment 5-Star Movement, benefiting from a split in the ruling Democratic Party (PD) and divisions in the centre-right, has built a strong lead over its rivals, an opinion poll showed on Tuesday.

The Ipsos poll in Corriere della Sera newspaper put the 5-Star, which wants a referendum on Italy’s membership of the euro, on 32.3 per cent – its highest ever reading and 5.5 points ahead of the PD, which was on 26.8 per cent.

The survey suggests that the 5-Star is likely to emerge as the largest group in national elections due by early 2018, although it might struggle to create a government given its stated aversion to forging coalitions.

Such a scenario could spook financial markets wary of both the 5-Star’s euroscepticism and the threat of prolonged political instability in Italy, which has the heaviest public debt burden in Europe after Greece.

The PD appeared to be paying the price for its internal feuds, dropping more than three percentage points in a month, as former prime minister Matteo Renzi battles to reassert his authority following a walkout by a left-wing faction.

The breakaway group, backed by former prime minister Massimo D’Alema and former industry minister Pier Luigi Bersani, has created a new party, the Democratic and Progressive Movement, which had backing of 3.3 per cent in the Ipsos poll.

“Political parties that preoccupy themselves with their internal divisions are electorally doomed,” said the British-based think tank Eurointelligence in a note.

“We are now at the point where it becomes increasingly improbable for the PD to regain power after the next elections.”

The centre-right is riven by its own divisions, with former prime minister Silvio Berlusconi looking to take charge of the bloc once more, but struggling to find common ground with old ally the Northern League, which has shunted to the far right.

Tuesday’s poll of some 5,000 people put the anti-immigrant Northern League on 12.8 per cent, with Berlusconi’s Forza Italia (Go Italy!) on 12.7 per cent.

A small centre-right party, which is in the government coalition and is led by Foreign Minister Angelino Alfano, has seen its support gradually erode and was put at 2.8 per cent, meaning it risks failing to even enter the next parliament.

Alfano’s group, which rebranded itself at the weekend as the Popular Alternative (AP), is the only mainstream party besides the PD and MDP, which openly touts a pro-EU agenda, raising the prospect of a eurosceptic government taking power in Italy.

Parliamentarians are still trying to draw up a new electoral law, with political analysts expecting them to agree on some form of proportional representation that might reward a stable majority to any party or group that wins 40 per cent of the vote.

The Ipsos poll suggested that both the traditional centre-left and centre-right blocs would fall well short of the 40 per cent threshold, leaving the 5-Star in the driving seat.

However, the party, founded by comic Beppe Grillo, has repeatedly ruled out forming an alliance with other groups, suggesting Italy could face months of political uncertainty following the next election, as happened last year in Spain.

Hotel manager’s role as a keeper of stories

UN denies reports it has prepared a road map