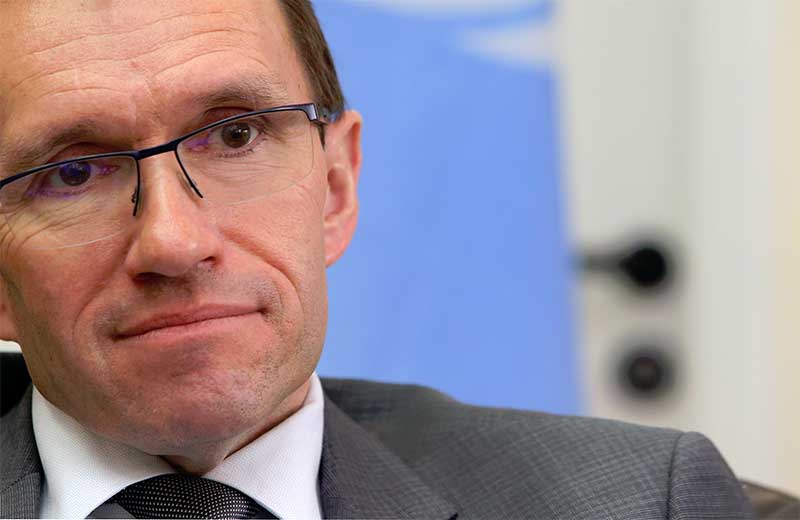 The UN has refuted reports that its Secretary-General’s Special Adviser for Cyprus, Espen Barth Eide, has prepared a road map with the aim to have the settlement talks wrapped up by September.

The talks, a UN spokesperson said, are led by the two community leaders and the UN is there to facilitate the dialogue, not to arbitrate.

Unficyp spokesperson Aleem Siddigue told the Cyprus Mail there is no UN road map, nor was he informed of a planned dinner between the two leaders.

“The Special Adviser had said last week that this is a leader-led procedure and the UN are here to facilitate. Our job is to walk behind the leaders and assist them in this process,” Siddique said.

He added that it was up to the two leaders to decide whether to meet for dinner.

Alpha TV reported on Monday evening that Eide has prepared a road map for the recommencement of settlement talks in April and their conclusion by September, when referenda would take place within the two communities.

Citing sources, the media outlet reported that the road map provides for the recommencement of the talks at the beginning of April with a dinner between the two leaders, President Nicos Anastasiades and Mustafa Akinci, and Eide.

The talks, according to the report, are to be completed by the end of July, while in the meantime the conference in Geneva would resume where security and guarantees would be discussed. The road map, the report said, provides that in September, the island’s two communities would be called to decide on the agreed solution in two separate referenda.

The aim is to have the whole procedure wrapped up before the beginning of the presidential elections campaigns on the Greek Cypriot side, Alpha said.

It added that the UN have a plan B whereupon in the case of the re-election of Anastasiades, talks would continue after the elections.

A source close to the negotiations told the Cyprus Mail that although there is no UN road map the reports reflect Eide’s thoughts on the talks as he would like to see the procedure concluded before the presidential elections.

“There is nothing official though, it’s just thoughts,” the source said.

As regards dinner, the source said, there is as yet no agreement on such a thing. “The president is willing depending on circumstances,” the source said.

Eide said last week following separate meetings with Anastasiades and Akinci that both leaders had raised ideas about structuring their conversations but that “they are their ideas, not mine. I think they are good, and we will support them”.

He had also refuted claims of certain outlets that had suggested that he was trying to impose some kind of arbitration.

Akinci, Alpha said, has expressed his willingness to meet Anastasiades and Eide in a social gathering following the latest development regarding ruling Disy’s bill proposal wresting decision-making power on school commemorations from parliament and handing it to the education ministry.

The talks were interrupted last month following tension caused between the two sides after parliament passed a legislative amendment introducing an annual commemoration of the 1950 plebiscite for Enosis (union with Greece) in state schools. Akinci had said that he would return to the negotiations table only when that decision is revoked.

Disy leader Averof Neophytou, who met Akinci last week, had said that his party’s proposal would be discussed at the House education committee on Wednesday.

It is understood this is an indirect way for the government to revoke parliament’s decision.