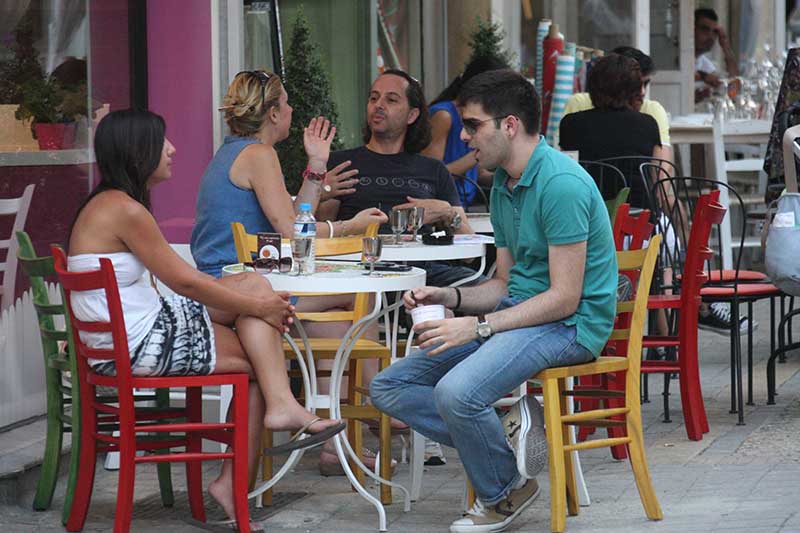 My Greek is not great. My Cypriot, however, is pretty good, and I’m totally familiar with words and phrases such as ‘jamai’, ‘jai’, and ‘nam bou lalis’. So when I explain to Marianna Katsoyannou – expert lexicographer and Associate Professor of Linguistics at the University of Cyprus – that I once got hopelessly lost in a taxi in Athens using only the word ‘isha’, she cracks up.

“The Greek language and Greek Cypriot dialect are totally different,” she laughs. “It’s almost as different as Italian and Spanish: the words, the accent, the pronunciation and intonation in the Cypriot dialect – they’re all very different, and you can’t understand it if you don’t know it. I think it’s easier for Cypriots to understand people from Greece; after all, they teach modern Greek in schools. But a Greek friend and colleague once said that Cypriot is another dialect completely, created by extra-terrestrials!”

Although Marianna herself hails from Greece, she’s lived in Cyprus since 2002 and, as a lexicographer and a linguist, the Cypriot dialect holds no fears for her. In fact, she finds it fascinating, to the extent that she has produced two dictionaries on the local language. “10 years ago, there were already 21 dictionaries of the Cypriot dialect,” she explains, “But I saw a gap in the field of study: the big problem with most of these dictionaries was that while the unique words were included, there was no basic vocabulary of everyday, real, existing words. So I decided to create a real dictionary: the first was a list of words; the second more detailed, including over 17,000 words from the local dialect…”

To those of us whose knowledge of Greek is hugely lacking, this doesn’t sound like a big deal. But when you consider the number of unique words and ‘false friends’ in the two dialects, you’re looking at a pretty monumental task. And, in the process of compiling her dictionaries, Marianna discovered a huge amount of local slang – words which don’t appear in any dictionary at all, and do not officially exist. “But they’re so interesting, and constantly changing and evolving,” she enthuses.

“There are any amount of sexual slang words that don’t make it into the dictionaries, and a huge amount of football-related words that everyone knows but are never written down. Omonia fans, for instance, are called ‘hohos’, because they say ‘Hoho Omonia’, while supporters of Apoel – and I still don’t know why this should be – are known as ‘lastikharides’” (which translates, roughly, as ‘tyre merchants’). “There are also incredible English words incorporated into the Cypriot dialect,” she adds, “words which have a Greek stem and an English prefix or suffix, such as ‘unpaisable’ (impossible), and ‘unbisteftable’ (unbelievable). And ‘kopse ta kornflakes’,” she laughs, “may translate as ‘stop the cornflakes’ but actually means stop talking nonsense!”

It’s slang words such as these which form the basis for Marianna’s latest project: a comprehensive, living, online dictionary of Cypriot jargon, known as CySlang.
“As you can see, I love language and I love compiling dictionaries,” Marianna explains. “But I also love my job as a teacher, and in each of my courses I always propose different exercises for my students. So in 2015, I suggested that one of my classes should compile a slang dictionary of the Cypriot dialect…”
Each student was tasked with finding 20 slang words – “very few, but they were new to this and had no experience,” Marianna explains – before Marianna herself corrected the entries and the online dictionary was launched. “It was a hit from the start,” she exclaims. “We started collecting and collating at the end of 2015, and the basic dictionary went online in February 2016. But because it’s a living, ongoing project, we’re accepting entries from internet users all the time… And we’re also seeing a huge number of visitors to the site.”

Despite the lack of funding, the project has been hugely successful: CySlang is now the definitive guide to the island’s slang, with words and phrases that are totally unique to Cyprus. Approximately 2,000 words have been submitted (though as Marianna is still correcting certain entries, only 1,400 are available online) and the dictionary is “changing every day!

“The youth slang is amazing,” she reveals. “There are words out there that not even my students know, they’re too old! You’d have to be a 14-year-old boy to know that a ‘coolas’ is someone who is super cool, or that a ‘yolos’ is someone who over-uses the phrase ‘you only live once’! These are words that have come into the dialect through the youth of today; their slang language is often based on emoticons or emojis and is constantly evolving.”

In the same way, she explains, local personalities often show up in slang terms. “Everyone knows, for instance, that if nobody’s sure who did or said something then it’s ascribed to Maricou apo tin Lefkara. But more recently, you’ll hear about women who think they’re so special, so beautiful and amazing, they’re branded ‘Marina apo tin Oroklini’” – a reference to the EgyptAir hijacker of 2016 who claimed his criminal ploy was all to gain the attention of his ex-wife Marina who lived in Oroklini!

“In a way, we created CySlang as a bit of fun,” Marianna reveals. “It’s a good vehicle to show that dictionaries can be funny, useful and interesting. And it’s an open dictionary, so everyone can contribute; I check the provenance of the term with several reliable sources, with Google, with the subscribers of the Facebook page on the Cypriot dialect, and with online comments in newspapers” – a useful source, she explains, as comments are often written spontaneously and as people speak – “and it can then be included.”
The website, even to someone whose attempts at Kypriaka are laughable, is fascinating stuff…

A festival of well-being